"When you went to Leicester, you realised why they had been so successful. They were just ruthless."

Toby Flood's first four years as a rugby professional were spent with Newcastle Falcons. They had some good players on their books and were often in the upper echelons of the league, but they were not a patch on Leicester Tigers.

Flood joined Leicester in 2008 and would go on to win three Premiership titles with the Welford Road side, as well as going achingly close in the 2009 Champions Cup final, against Leinster. Tigers were full of winners, and took no prisoners.

"In my first pre-season," the former England outhalf recalled, "the forwards did 100 live scrums in training.

"And in 2009, when we beat Cardiff in the Heineken Cup semi-final shootout, we practised that under real pressure in training. What made me think Leicester was a bit odd was, we were told if we didn't kick four out of five, we were doing extra fitness.

"And Lewis Moody was stood in front of us, trying to put us off and annoy you. I was like, 'Lewis, you've got fitness too if I miss!' He didn't care if we had it. He was just trying to make it really difficult for you."

On House of Rugby [LISTEN from 16:10 below], Toby Flood joined hosts Seán O'Brien and Alex Goode, and recalled some of the crazy team bus antics that used to go down at Leicester Tigers.

Leicester Tigers and the team bus rite of passage

The senior Leicester players also had a team tradition where newcomers would be invited to effectively run the gauntlet and try get past them to touch the back of the team bus.

"It would just build until you were antagonised to go for it.

"I was fortunate that I never had to go for it, due to the fact that [early on] I had ruptured my Achilles. But these boys would just be flying in and trying to cause carnage. It was just messy. We're talking shirts ripped, blood everywhere, people getting stamped on. It was just ruthless.

"I was sitting there thinking, 'We've got a game... we've got a PREMIERSHIP FINAL next week'. They didn't care. They were just kicking the crap out of each other. It was as ruthless as it got." 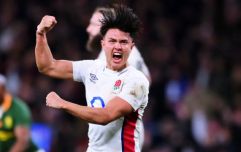 END_OF_DOCUMENT_TOKEN_TO_BE_REPLACED

Sounds very familiar with the famous Munster team bus story, when the likes of Peter O'Mahony and Conor Murray took over the back seat and paid a costly price.

Asked if he would have fancied getting to the back of the Leicester Tigers team bus, Seán O'Brien declared, "Not with those boys! Julian White was like a pitbull!"

"It was a great time," Flood reflected. "Six finals in six years... you build those connections with those guys because you have those experiences together."

We're not sure ourselves. We would be perfectly happy with some paint-balling or a few beers for our next team-building day.


popular
"I trained with a guy that was born in 2004 the other day. We reckoned Earlsie could be his father!" - Peter O'Mahony
Nigel Owens on most annoying players to referee (three of them are Irish)
Six All Blacks but no Ireland players in world's top 20 list headed by Antoine Dupont
What is the story with Tyrone clubs' woeful record in the Ulster championship?
Longford GAA movie explores the tale so many young footballers can relate to
"I asked one question and lads slagged the arse off me!" - Johnny Sexton on Roy Keane chat
Cork GAA will have fight on its hands to hang onto top prospect
You may also like
2 days ago
Line-up for Monday Night Football confirmed as Jame Carragher makes big tease
2 days ago
Joey Barton found not guilty of assaulting Barnsley boss Daniel Stendel
4 days ago
Antonio Cassano reveals Cristiano Ronaldo text messages after TV criticism
4 days ago
Divock Origi to the rescue after Diogo Jota's absolutely incredible miss
4 days ago
Ayr United goalkeeper banned for throwing toilet roll at rival fans
4 days ago
Ronnie O'Sullivan on why he staged sit-down protest during UK Championship defeat
Next Page