"Leinster have got to come to our backyard. It’s our gaff" - Ellis Genge

"We are not plucky losers, we are not that type of team."

Ellis Genge comes in, not long after a training session and catches a glimpse of his ruffled hair on the Zoom call that has been started up for him. Not 100% pleased with what he sees, he asks for a cap, fixes it on and he is ready to go.

Another one of the interesting characters and players willing to open up on issues, which English rugby produces at a steady clip, the Leicester Tigers captain can be, at times, testy and fascinating. He may offer a surly response to one question, or seek clarification on the meaning behind it, only to speak from the heart with commendable honesty.

END_OF_DOCUMENT_TOKEN_TO_BE_REPLACED

Ahead of today's Champions Cup quarter final against Leinster, at Welford Road, Genge wanted it known that the four-time champions, excellent as he believes they are, will need to lay it all on the line, and then some, to advance.

The loosehead took over from Tom Youngs as Tigers captain and a simple, early question about the retired club legend brings a candid response:

"Mate, me and Tommy didn't really get on, at the beginning. In my first two, three seasons here. I guess our relationship developed through playing together. Really respected each other on the pitch. Off the pitch, we really didn’t see eye to eye on a lot of things. Farmer boy meets city boy!

"I was quite chopsy, as well, and we just didn’t get on too well. But, as I matured as a character, and Tommy learned to love me for who I am, we got on like a house on fire."

Well established as the England No.1, Genge also discussed his past battles with Tadhg Furlong, making Leinster feel uncomfortable and what a trophy - league or European - would mean for a Leicester side that finished 11th in 2018/19 and 2019/20, and only avoided relegation after Saracens' massive points deduction. 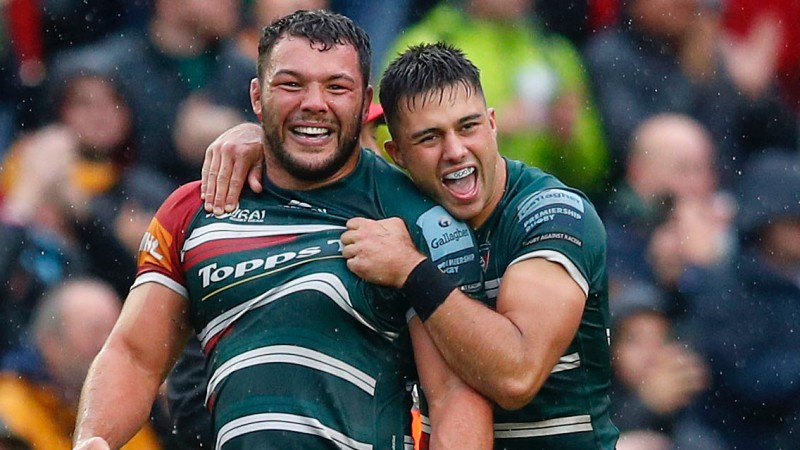 'It's a good challenge for us' - Ellis Genge

Leicester are currently top of the Gallagher Premiership and have beaten Bordeaux, Connacht and Clermont on their way to the Champions Cup quarter final.

Tigers will face a "brilliant" Leinster side, this weekend, and one that have 'won eight major trophies in the past decade'. "They are huge competitors and their guys are used to these big games. Our squad isn't," says Genge.

"They've just got so much depth," he adds, before turning for clarification on a figure. "They've got how many of Irish squad, 31? They've 31 internationals and 18 that were in their Six Nations squad. So, brilliant. Real tough game for us."

END_OF_DOCUMENT_TOKEN_TO_BE_REPLACED

Genge mirrors the comments of his England coach Eddie Jones, from recent months, when he leans on Leinster players being centrally contracted by the IRFU and having the "perk" of not having as many game minutes logged as many English players, each season.

And in case one was getting lulled into Leicester building their opponents up too much, Genge strikes quickly through that.

"We are not plucky losers. We're not that type of team," says Genge.

"If we lose, it's because we were supposed to lose, and we didn't fight hard enough. So, it's all on us. I’m not going to let people build the manifestation of Leinster being the European giants that they are. They have got to come to our backyard. It is our gaff. What's their's, the Aviva?" 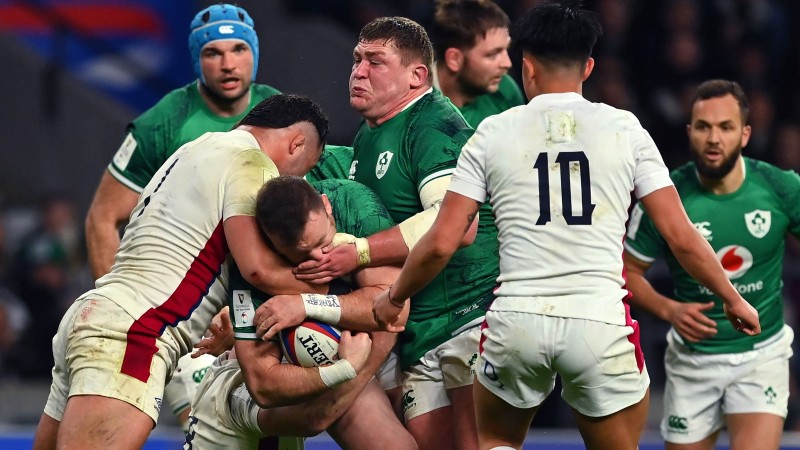 Ireland prop Dave Kilcoyne, backed up by Tadhg Furlong, is tackled by Ellis Genge of England. (Photo by Brendan Moran/Sportsfile)

One of the most intriguing battles in this quarter final will be Ellis Genge locking horns with Leinster tighthead Tadhg Furlong again.

Furlong and Genge have huffed and puffed to a stand-still in recent seasons, but the England prop came out on top in their last meeting. Genge and the English scrum got on top - albeit with Ireland calling foul and contesting a few calls - but it was odd to see Furlong struggling, as it so rarely happens. Genge comments:

"We had every chance of winning that [Ireland] game, but the last 20 minutes really let us down... Tadhg is brilliant, he is obviously a British & Irish Lion, twice, and a world-class international. He's highest calibre.

"Every dog has their day. Obviously, we came up trumps at the scrum last time at Twickenham but by no means does that mean it is going to happen again. I'll put my best foot forward and hopefully he meets me in the middle."

Going back to that home advantage that Ellis Genge is so keen to lay out as a trump card, the Leicester captains says of Welford Road, "It's incredible. It’s definitely the best stadium I have played in in terms of atmosphere, hands down.

"We've got a brilliant bunch of fans and I hope to see them there, en masse, because they really are a 16th man or woman for us... There are a few stats you look at that say home advantage is worth a few points. It depends where people's heads are at and whether they show up, or not... I am not sure many of their boys have had the opportunity to play here. So it’s a good challenge for us, to see where we're at."

"One thing you know about the Irish teams. They've got a lot of dog in 'em. They'll be coming for that battle."


popular
Roy Keane's issue with Argentina star could rival Graeme Souness and Paul PogbaA~WQA~~~~~~AAAA
Roy Keane cracked up Ian Wright and Gary Neville with England team spirit remark
Lionel Messi makes Gary Neville eat his words after "silk pyjamas" comment
Roy Keane takes moment on TV to pay tribute to his old team in Cork
Man United youngster causes scrap from the bench after throwing ball at Australia player
The nine England World Cup footballers who could have played for Ireland
'I was so stressed the week before the All-Ireland and I ended up having a panic-attack' - O'Shea and O'Sullivan open up
You may also like
5 days ago
"Two Irish players are best in the world" - Rugby reacts to big Josh van der Flier and Terry Kennedy awards
6 days ago
Two baffling omissions as four Ireland stars make World Rugby 'Dream Team' of the Year
6 days ago
Josh van der Flier claims World Rugby Player of the Year at Monaco ceremony
6 days ago
"Highlight of my Ireland career" - Behind the scenes as Jack Crowley and Ross Byrne covered for a legend
1 week ago
Bundee Aki reminded us all of his best qualities, on a night Ireland couldn't do without him
1 week ago
Peter O'Mahony delivered some fitting Jack Crowley comments after surprise Test start
Next Page