It could have been worse.

Bundee Aki was left fuming after receiving a red card against The Stormers following a collision with Seabelo Senatla.

The winger took a big hit to the head that has been reported as a significant injury, which will leave him out for 'four to six months'.

The Connacht star needed to be guided off the pitch, continuing his protests while Senatla was receiving treatment, and with the nature of such a tackle and his unsavoury reaction, many were fearing the worst for Bundee Aki.

The potential for a maximum ban was very much a genuine threat, however the league officials have released a statement explaining why the ban will only be for eight weeks.

END_OF_DOCUMENT_TOKEN_TO_BE_REPLACED

The statement reads: "The Disciplinary process related to Bundee Aki’s (Connacht Rugby) red card in the United Rugby Championship Round 2 game against DHL Stormers on Saturday, September 24 2022 has resulted in an eight-week ban.

"After an act of foul play against DHL Stormers player No 11 (Seabelo Senatla) referee Gianluca Gnecchi showed the Player a Red Card in the 60th minute of the game under Law 9.20(a) – A Player must not charge into a ruck or maul. Charging includes any contact made without binding onto another Player in the ruck or maul. 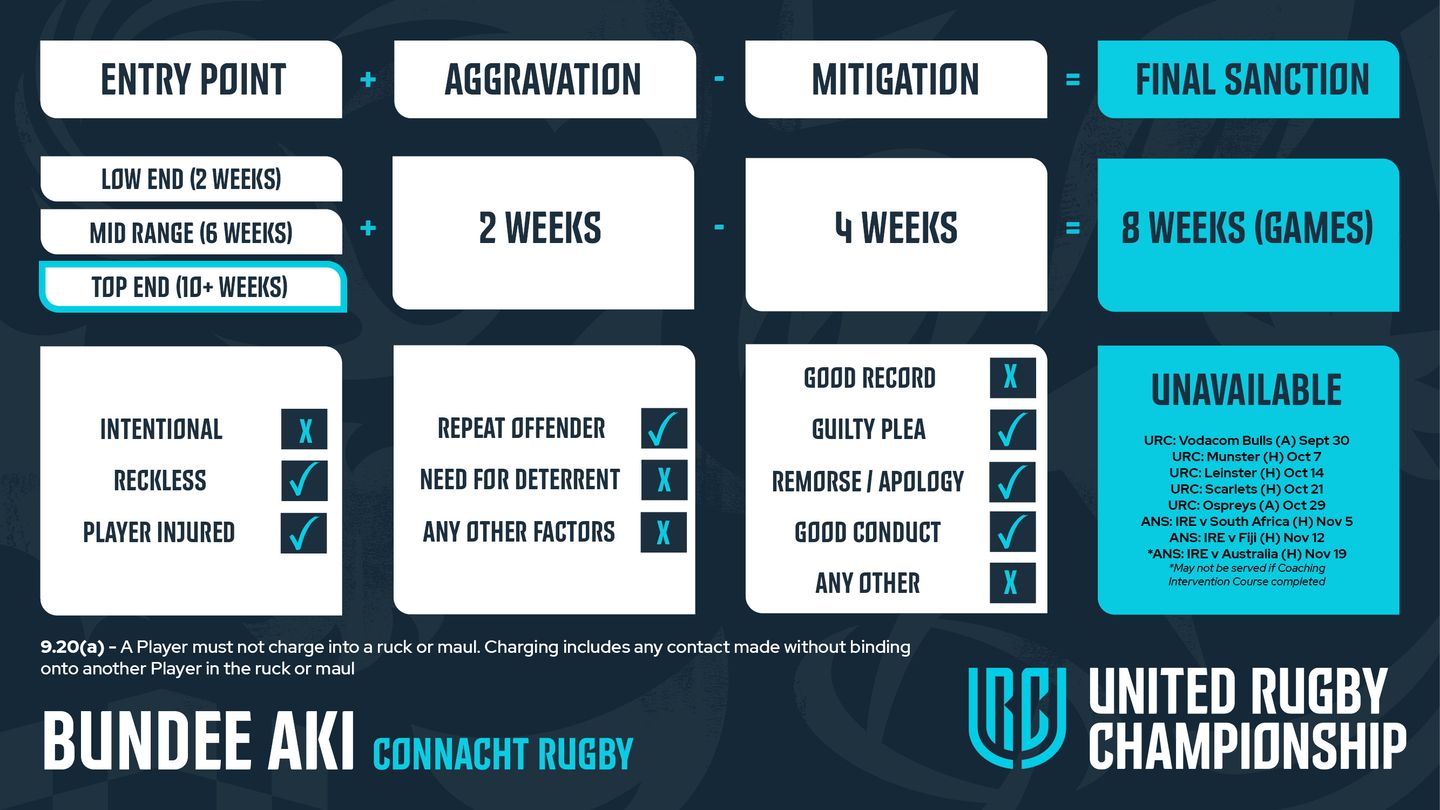 "In his responses to the Judicial Officer overseeing the disciplinary process (Pamela Woodman, Scotland), the Player had accepted that he had committed an act of foul play which warranted a Red Card.

"However, Ms. Woodman also considered the Player’s actions and demeanour towards the referee in connection with the issue of the Red Card, which she found did not meet the expected standards of conduct or respect.

END_OF_DOCUMENT_TOKEN_TO_BE_REPLACED

"This was also taken into account (in accordance with URC’s Disciplinary Rules) in determining that the Player’s offending was at the top-end on the scale of seriousness, which warranted an entry point sanction of 10 weeks.

"The Judicial Officer then considered if there were any mitigating factors and found that the Player’s acceptance that he had committed an act of foul play (during the off-field disciplinary process), expression of remorse, apologies to both the opposing player and referee, and willingness to engage with his club coaching staff on a plan to address this issue, were relevant mitigating factors.  These mitigating factors warranted a reduction in the sanction of four weeks.

"The Player’s previous suspensions for red cards in 2019 and 2021 for foul play involving head contact, as well as his suspension and warning for previous conduct relating to interactions with referees, were considered aggravating factors, which the Judicial Officer decided warranted a further two weeks of sanction.

"As a result the Player will be suspended for a period of eight weeks. Should the Player complete the Coaching Intervention Programme then the sanction will be reduced by one week.

Fixtures Bundee Aki will be unavailable for:


popular
Talksport presenter puts Martin O'Neill to the pin of his collar over Declan Rice and Jack Grealish
Roy Keane scores winning goal past Micah Richards in ITV v BBC pundits match
Roy Keane reveals what he wrote about England during Senegal game
Rory McIlroy explains 'falling out' with Shane Lowry that lasted a few years
Gary Neville sticks up for Ronaldo as contextless pictures and videos taken as gospel
World Cup Power Rankings: The top 10 players at the tournament ahead of the quarter-finals
Cristiano Ronaldo's sister blasts Portugal boss' decision to start forward on the bench