As role models go, you can't go too far wrong with Paul O'Connell.

Rory Best was one of the first British & Irish Lions stars in camp. He would have preferred had Ulster gone deep into the league and European season but, as it turned out, himself, Jared Payne and Iain Henderson were in the first batch of men clocking in for Lions training, back in May.

All told, Best did a nine-week stretch with the Lions and he went through quite a few roommates. He eventually ended up rooming with Alun Wyn Jones then Iain Henderson, but he never forgot his few nights with England prop Kyle Sinckler.

Best told The Hard Yards [from 12:30 below] all about that Lions Tour and his experiences with the "paranoid" and rarely chilled Harlequins forward.

"I started off with Kyle and it was a bit of an experience," Best recalled.

"He's a great guy but he's bonkers. He's so paranoid that it's hard to know how he can function as a rugby player, being that paranoid but somehow he makes it work.

"He was always obsessing over things and at one stage on the tour he was thinking that he wasn't going to get picked on an England squad - that would be in November and this was way back in June. He had that stuff going through his head. He was like, 'I'm not sure Eddie is going to pick me'.

"I was like, 'Look, you're on the Lions Tour and you're playing really, really well. Don't worry about it'." 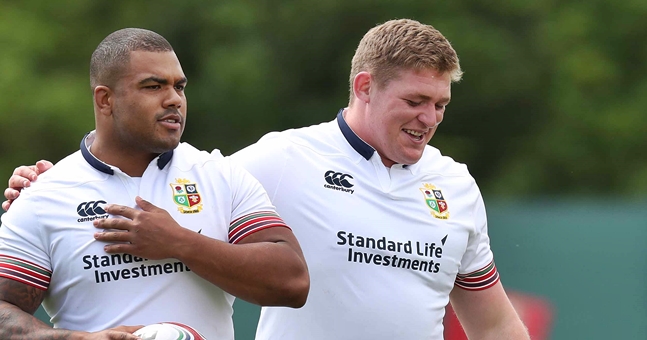 The Ireland captain, who led the midweek Lions team on two occasions in New Zealand, laughed as he thought back to his highly enjoyable time in Sinckler's company. He continued:

"He's really inquisitive about the game. He watches so much sport and Paul O'Connell is his hero.

"All he wanted to know was what it was like playing with Paul O'Connell and what Paul is like.

"He'd ask you about the Test matches he played in and the props you played against. He was a good guy."

Sinckler would have been in the Quins Academy, back in 2013, when O'Connell came to The Stoop with Munster and put in another barracking, brutish performance. That game, and a host of others in Munster red, Ireland green and in the Lions jersey, definitely left an impression on the tighthead.

END_OF_DOCUMENT_TOKEN_TO_BE_REPLACED

As for Henderson, Best is still astounded at how messy his Ulster and Ireland teammate can be and how he could sleep, mid-afternoon for two- and three-hour stretches.

"Over his side of the room," Best remarked, "it looked as though someone had grabbed his bag, kicked it in the air and then, when all the clothes have landed everywhere, they proceeded to kick that again."


popular
Get him a tuxedo, give him the All-Star and for crying out loud, someone bring that man out to America
Fans react to Tottenham Hotspur's 'brilliant tease' for Richarlison signing
Southampton pay tribute as Shane Long leaves the club after eight years
Tiernan Kelly and three other players hit with ban following tunnel brawl
The four stone-cold certainties for All-Stars even as early as this
Quiz: Name the players these famous footballers played alongside the most times
Eamon McGee just couldn't help himself with Armagh-melee tweet
You may also like
3 years ago
James Haskell's first Lions Tour encounter with Tadhg Furlong was certainly unforgettable
4 years ago
Garry Ringrose only needed two games to expose regrettable Warren Gatland decision
4 years ago
Warren Gatland reveals concerns about Fields of Athenry before Lions Tour
4 years ago
Ben Te'o was rightly livid after some sneaky jersey swapping on the Lions Tour
4 years ago
Two Ireland stars included in French outlet's Team of the Year
4 years ago
2017 ended the debate about Johnny Sexton being Ireland's greatest outhalf
Next Page