"Suddenly, up pops Ronan O'Gara" - How the European champions 'threw a lifeline' and saved a rugby career

"There were rumours circulating at the back end of last season."

In June, as Ronan O'Gara and La Rochelle were celebrating a first ever major trophy, Kyle Hatherell was finishing up his first full season with Worcester Warriors, with a lot to be proud of.

Warriors may have needed a final day win over Bath to avoid finishing bottom of the Premiership, but the South African flanker had played 23 games and had done more than enough to look forward with confidence about his future as a rugby professional.

END_OF_DOCUMENT_TOKEN_TO_BE_REPLACED

He was 27 and the life he had always dreamed of was now a reality.

That cosy settled feeling would not last long as clouds began to settle around the debt-saddled English club.

Back when he was a teenager, and in his early 20s, Hatherell was in the underage set-up of Super Rugby's Sharks. A forward that could switch between the second and back rows, Hatherell tipped away at the Sharks academy, in Durban, and played some club rugby but there was no pro contract forthcoming.

"I eventually got an office job, working for an internet company," he says. "Then, funnily enough, a guy I knew from the Sharks academy messaged me and said, 'Do you want to play rugby in the UK?' Definitely!

"I got in touch with a club in Scotland and played club rugby while working full-time at a chemical factory in Scotland. I was wearing a banana yellow hazmat suit, every day, pouring chemicals, in the back ends of Scotland.

"I did a season with a Scottish Premiership side in Troon, called Marr. I was contacted by Jersey [Reds, in 2018] as they were keen on signing me. So I moved to the Channel Islands and played two seasons there. We then had a Covid-hit [Championship] season and, when rugby got going again, I had a chance to go to Worcester." 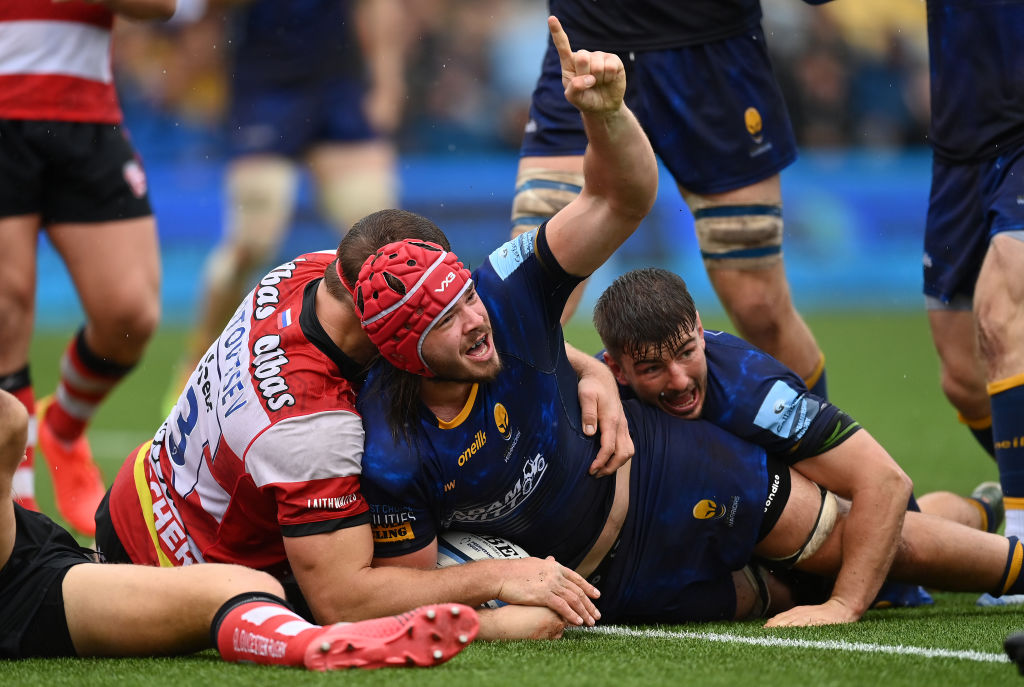 Kyle Hatherell on the sad demise of Worcester Warriors 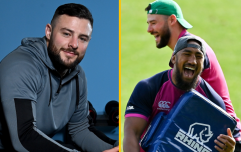 END_OF_DOCUMENT_TOKEN_TO_BE_REPLACED

At the tail-end of the 2020/21 season, Kyle Hatherell got the chance to show Worcester Warriors what he could do in the cut and thrust of the Premiership. He had already done well in the training runs, but positive impacts, off the bench, against Exeter and Leicester helped no end.

Last season saw him start 19 of his 23 appearances and score four tries along the way. Warriors had been promoted back to the Premiership in 2015 and, on the field, were doing enough to tread water.

Beneath the surface, the clubs finances were in an awful state. Hatherell says rumours of a tough time ahead were already swirling before the end of last season.

"There are loads of rumours always flying around in the rugby world," he tells us, "so we didn't really read into it too much. In the last month of this season, though, it was pretty instant when it did happen.

"We pretty much found out [the club was going into administration] when the public did. The players were not really kept in the loop on what was going on, until the last minute."

"It was really tough," he adds. "The only thing that really kept anyone going was the fact that all the boys are so close to each other. Everyone was showing up, every day, even though it was never clear what was happening, and there was no clear communication of anything that was going on. We'd often have to follow people who were covering the story and find out big news about the club from their tweets. We were left in the shadows... it was quite horrible, but we all would have appreciated if they were just more up front with us."

Once the players, and all the staff at Worcester, knew the end had come, and the club as it was would cease to be, it was a case of trying to find new jobs.

The likes of Jamie Shillcock, Ollie Lawrence and Billy Searle (Bath), Oli Morris (Munster), Rory Sutherland (Ulster), Francois Venter (Sharks) and Duhan van der Merwe (Edinburgh) are among 20+ players to have found short- or medium-term deals with new clubs. "It's difficult, and you reach out when you can," says Hatherell, "but there's quite a few boys still struggling to find their feet."

For the South African, he was left using what contacts he had, leaning on his agent and 'praying for whatever bit of luck I could find'. 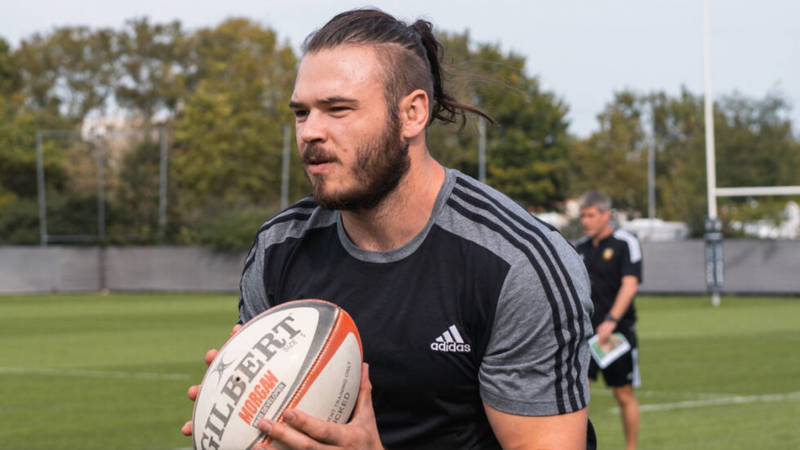 'Thrown a lifeline' by Ronan O'Gara

Even before the curtain (or hammer) dropped on Worcester Warriors and their hopes of both retaining staff and staying in the Premiership, players were reaching out to agents and whatever contacts they had to see if there were options available.

"It was quite a surreal moment, because everything had been going from bad to worse. It felt like this was not real - that I was being thrown a lifeline by the European champions.

"I'm extremely grateful that they reached out and gave me an opportunity to come here, because I know there's many boys that are in positions where they haven't got that chance yet."

La Rochelle, who beat Leinster in last season's Champions Cup final, had done their homework on the South African back row, but there were a few more boxes to tick.

Hatherell can vividly recall the sensation of sitting down at his laptop on a Friday, at midday, and waiting for faces to appear on the other end of a Zoom chat.

"Suddenly," he says, "up pops Ronan O'Gara and Robert Mohr. They're staring at me and I almost went into shock, thinking, 'This is actually real'.

"We chatted about the club, its' history, how they'd major major strides, about the way I played and how, if I was interested, I could add value to what they do. It was a surreal moment."

Hatherell has been three weeks at the club, and he made his debut, last weekend, in a surprise home defeat to Pau. He has moved from a hotel to an apartment and notes how the likes of Will Skelton and Dillyn Leyds had reached out to offer their advice and support, to help him get settled in.

Up next for Stade Rochelais and their latest recruit is an away date with Brive. O'Gara's side reached the summit of the Top 14, earlier this season, with a rousing win over Toulon. However, defeats to Toulouse and Pau have seen them slip back to third.

The club has three players in the current French squad, as well as Skelton (Australia), Levani Botia (Fiji) and Ulupano Seuteni (Samoa) with their countries for the Autumn Nations Series.

Hatherell is very much part of Les Maritimes now, and he is determined to prove he can mix it in a squad gunning for two big trophies.

"I've got to do my preparation and be ready for that time when, if I do get my chance, I can stake my claim. I want to show my coaches they've signed me for a reason, and that I'm capable of starting for this team, and delivering for them."


popular
Kilmacud Crokes to counter Glen's objection over extra players in All-Ireland final
"He's a serious specimen, 6 ft 3 as well, so he's an incredible athlete" - Geaney hails O'Connor's impact
"It's very clear how I felt about it. I had a very definite view on it" - McEntee on Dunboyne's 2005 semi-final saga
Roy Keane on Man United's two most improved players since Ronaldo left
January transfer window 2023: Follow the latest updates live in our hub
"He didn't give me that jersey back!" - Johnny Sexton on new rival Jack Crowley
Can you name the Republic of Ireland Premier League player from their wikipedia?
You may also like
4 days ago
Munster get brutal Champions Cup draw as Leinster face Ulster in Last 16
5 days ago
“He's gonna be pi**ed when he hears this!” – Anthony Watson's Vegas trip with Tadhg Furlong
1 week ago
Kieran Treadwell the most unfortunate Ireland player to miss Six Nations call
1 week ago
Joey Carbery the biggest selection casualty as Andy Farrell gets ruthless
1 week ago
Ireland squad Six Nations 2023: The big call-ups and surprise omissions
1 week ago
"I don't see where he fits in" - Predicting the big Six Nations call-ups and casualties
Next Page