The players knew what was happening.

It's a sign of Johnny Sexton's importance and in fact, greatness, that we are constantly speaking about how often he is targetted in matches.

END_OF_DOCUMENT_TOKEN_TO_BE_REPLACED

So it would be naive of us to think that teams shouldn't try to ruffle the feathers of one of Ireland's most important players.

It was clear after twenty minutes of Ireland's 13-9 win over England on Saturday evening that Sexton was going to be on the receiving end of some heavy challenges for the entire 80 minutes. 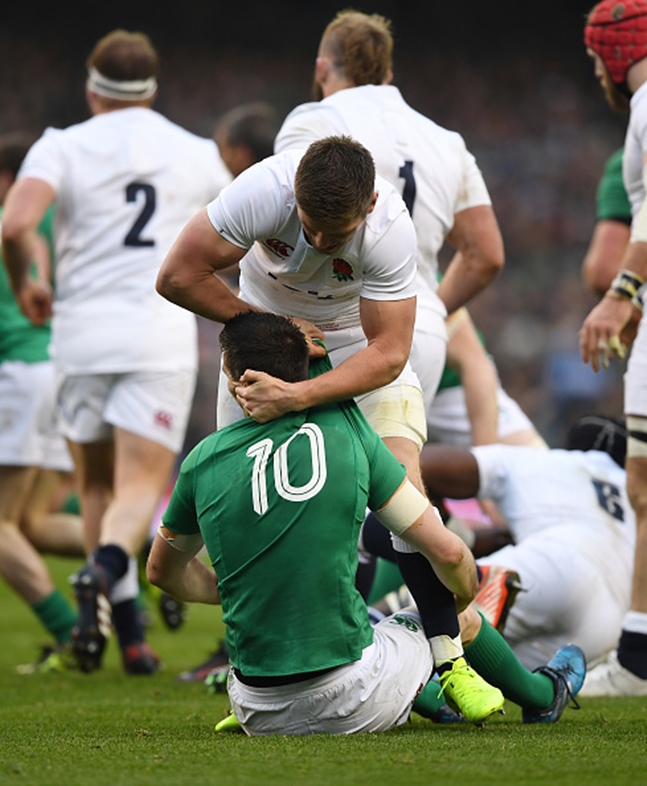 They were all at it.

So it does not come as much of a surprise when Kieran Marmion reveals that he could actually hear the English players calling out pre-emptive moves to put in heavy hits on Ireland's out half.

“I knew they would probably be trying to put me and Johnny under pressure,” Marmion told the media after the game.

“I could hear them at all the rucks, giving me a good bit of verbal pressure. You can hear them shouting, ‘I’m all over him, I’ve got him.’ I guess it’s just a way of putting people off."

In fact, before Itoje's hit on Sexton which you can see above, England captain, Dylan Hartley called out, "Sexton, Sexton", at a ruck. Moments later, Itoje smashes Sexton.

Marmion says that he expected the English to target both himself and his half-back partner but in the end, it cost the English, as they racked up a number of penalties.

“I guess it probably worked in our favour. They were giving away cheap penalties and Johnny has to try and wear that and get on with it."

It certainly did and the best thing about it all was that Sexton dusted himself down every single time and put in a class performance which helped guide Ireland to victory.


popular
World Cup 2022 Day 10: All the major action and talking points
Iran demand action by FIFA after USA team change flag on social media
Thibaut Courtois warns teammates after leaks emerge from Belgium camp
"I can absolutely say that I have never enjoyed a job more" - McKaigue revelling in new role as Slaughtneil GPO
Roy Keane's issue with Argentina star could rival Graeme Souness and Paul Pogba
"I have equal love for football and hurling" - Sheehy set for two Leinster finals in two hours
World Cup 2022 Day Nine: All the major action and talking points
You may also like
4 days ago
Former England international admits he wishes he had played for Ireland
1 week ago
Two baffling omissions as four Ireland stars make World Rugby 'Dream Team' of the Year
1 week ago
Josh van der Flier claims World Rugby Player of the Year at Monaco ceremony
1 week ago
"Highlight of my Ireland career" - Behind the scenes as Jack Crowley and Ross Byrne covered for a legend
1 week ago
Bundee Aki reminded us all of his best qualities, on a night Ireland couldn't do without him
1 week ago
Peter O'Mahony delivered some fitting Jack Crowley comments after surprise Test start
Next Page