Fastest in Connacht since they started collecting the data, and you'd struggle to find a faster player anywhere in the country.

Kieran Marmion is as lively and committed as they come. The Connacht and Ireland scrumhalf has been hampered by an ankle injury, and surgery, this season but he is looking back to his best.

Marmion got the start in Connacht's Guinness PRO14 loss to Munster and he will be pushing Caolin Blade close for the No.9 jersey this week, ahead of Saturday's quarter final with Ulster.

Jack Carty has been playing rugby with Marmion for the past decade and they have formed a handy partnership out West. In this years's Guinness Six Nations, they even shared the field for Ireland. For all the spark the half-back duo brought off the bench, the defeat to Wales, in Cardiff, was short on highlights.

On the latest episode of Baz & Andrew's House of Rugby [from 47:00 below] spoke about Connacht's running rugby and the speed tests Marmion just dominated, over in Galway.

Hosts Barry Murphy and Andrew Trimble feel Carty has 'Try of the Season' locked down already after he finished off a multi-phase Connacht counter-attack with a brilliant chip and chase finish.

"Yeah, like playing into the breeze it was some try, to be fair," says Carty.

"The stuff in the 22, like. Bundee Aki's around the back offload and then you had Tiernan O'Halloran's offload as well and there were just offloads everywhere.

"Then Denis Buckley's pass out the back to me and I was fortunate enough that I got Matthew Morgan kind of flat-footed. I actually thought... I was like, 'How did I beat him?' because I wouldn't be the quickest. I looked at me speed thing and I wasn't quick at all. I was surprised I actually got there in the end."

END_OF_DOCUMENT_TOKEN_TO_BE_REPLACED

Players can go back to their G.P.S trackers and now pick out specific in-game moments, and track what speeds they reached (as well as other analytical data).

Carty admits his pace may not be enough to burn past most covering defenders but several of his teammates are charting impressive numbers.

"They did it last week, I think. Marmo, Bundee and a few others were trying to get their top speeds. Marmo hit a 10.7 (metres per second). That's north of 37 kilometres (per hour).

"It was after training. We were doing sprints after... 10.7. He's the fastest man in Connacht rugby history. That's ridiculously quick." 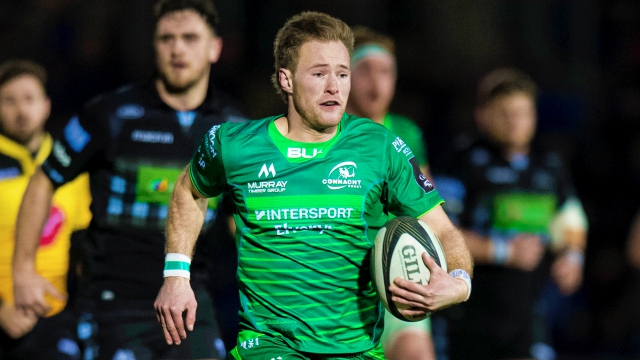 Trimble would have clocked decent metre-per-second times (clocked over 20- and 40-metre sprints) during his time with Ulster and was mightily impressed with Marmion's feat. "Jacob Stockdale or Craig Gilroy would be quick," he says, "but none of them were getting 10.7s."

"Galway, now," Carty adds, "does have a slight breeze!"

We can now elevate Marmion into our provincial speed leaderboard, with his 10.7 m.p.s improving on the swift 10.0 m.p.s benchmark set by Rory Scholes last season.

Simon Zebo previously held the Munster record, at 9.85 m.p.s, but we will strife to find out if that has been surpassed since he left for Racing 92.

Murphy's take, from his Munster days, was that, for all the sprint training players did, openside David Wallace would turn up after having no training 'and with both ankles taped together' and blitz all of his teammates.

Some lads are just born to run.


popular
Justin Gaethje tells Conor McGregor to wait his turn
QUIZ: Correctly identify these World Cup 2014 players from their stickers
The SportsJOE 12 o'clock quiz | Day 73
QUIZ: Can you name the Football Italia cult heroes? | Part 2
The SportsJOE 12 o'clock quiz | Day 72
QUIZ: The toughest football legends quiz you'll take today
SportsJOE 2000s Football Quiz | Round 3
You may also like
2 weeks ago
"He walks into the dressing room and Pienaar goes, ‘We can’t win’!"
2 weeks ago
Baz & Andrew's House of Rugby - Finn Russell on life in Paris
2 weeks ago
Ben Youngs talks about Leicester Tigers' infamous Tuesday training sessions
3 weeks ago
Ryan Baird on his physical and mental preparations to hit rugby's return running
3 weeks ago
"He's a massive human being with an unbelievable skill level" - Jean De Villiers
3 weeks ago
'They're not sure if we'll have live sports in South Africa for the rest of the year' - Jean De Villiers
Next Page