The Leinster openside must have left the 'OFF' switch at home.

Josh van der Flier once again showed his worth to this impressive Leinster side by leading the charge against Premiership leaders Northampton Saints.

Chris Boyd's side may be top of the tree in England, but Leinster look the form team in Europe again. Their attacking play was a joy to watch yet they defended manfully and with impressive cohesion for long stretches.

Van der Flier was an inspiration at Franklin's Gardens. His appetite for work, his aggression in the tackle and his awareness around the breakdown are all superb. Add to that some extra dog, brought on by the early bite in the Pool 1 fixture and he was tough to contain.

The 26-year-old proved a nightmare for Saints as their bright first half turned into an ugly affair after the break. Van der Flier stuck 20 tackles in defence and missed none. In attack, his five carries gained 16 metres and he beat two defenders with ball-in-hand.

Around the breakdown, and defending inside his 22, the flanker was animalistic. He made two superb poaches into Saints rucks and there was an exacting grip and rip tackle that won his team back under the shadow of his sticks. 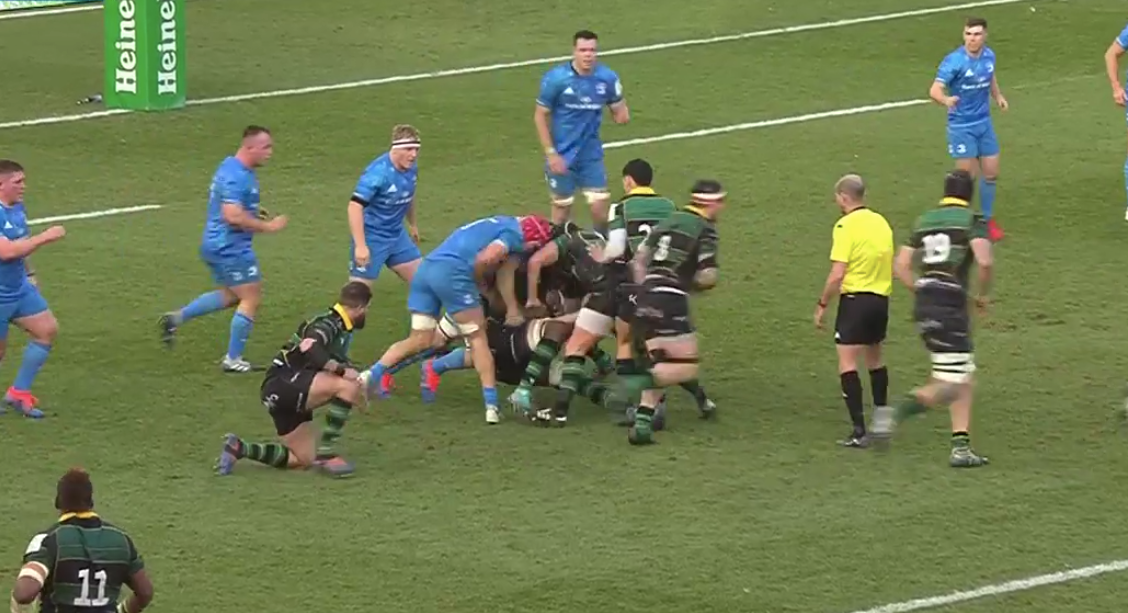 At that stage, when van der Flier made his third turnover, Leinster led 31-16. Seemingly deflated by trying and failing to breach the Leinster line in the second half, Northampton dropped their heads.

Most sides would leave it at that and take the bonus point victory. Not Leinster. They marched down the pitch and subs Ed Byrne and Luke McGrath added two insults to the raft of injuries their side had inflicted on Saints.

Following the match, it was back to the calm, reserved and respectful van der Flier we all know so well. His other side.

"It was a really, really tough game," he told Channel 4. "We managed to get a few breakaway tries there but the scoreline doesn't show how tough the game was.

"Northampton are a top quality side and we know that, especially from a few years ago, we came over here and won and lost badly the next week. We know how these things go, so we'll be well up for next week. We know it's not over yet."

"We're obviously pleased with that performance," he added, "but we know Northampton will be annoyed, having expected and hoped to do better. We know it'll be tough this next week coming and that we have to be better again. Looking forward to it."

43 points to 16 and seven tries to one, but van der Flier wants Leinster to up it again next Saturday. Northampton could be in for a tough evening in Dublin.


popular
Names beginning to emerge from Lions stand-by list for South Africa
The SportsJOE 12 o'clock quiz | Day 351
"I'd play it in the back garden if I could. We've been training for this since last September"
Ronan O'Gara will never forget his first encounter with Jonah Lomu 'in his pomp'
"Some people just have different passions" - Geezer sees where Clarke is coming from
Finally, Gaelic football is returning to our TV screens - what's on and where?
"I’d love to do my Colin Corkery impression and play Junior B football. It depends on the body"
You may also like
1 week ago
Leinster run out of steam as Ronan O'Gara's La Rochelle reach Champions Cup final
2 weeks ago
One more outstanding game and Jack Conan could be a Lion
3 weeks ago
Madigan, McFadden and Henry on one game they'd change if they could go back
4 weeks ago
Rating the chances of Leinster's 16 Lions hopefuls
1 month ago
Leinster coach Robin McBryde on Lions honour and facing Springboks 'Bomb Squad'
1 month ago
Leinster announce signing of Michael Alaalatoa from Crusaders
Next Page