Wales may have lost 22-21 to an ecstatic Italy at the Principality Stadium, today, but Josh Adams can hold his head up high. For more reasons than one.

The Wales winger saved an all-but-certain Italy try as he tackled Monty Ioane out of play, only to score a stunner of his own, late in the game.

END_OF_DOCUMENT_TOKEN_TO_BE_REPLACED

It looked as though the Adams score would finally settle it with an Italian side that had led for long stretches, in Cardiff.

In the final minutes, though, 22-year-old Grenoble winger Ange Capuozzo blazed through the Welsh defence and set up teammate Edoardo Padovani for the stunning match-clincher.

It was Italy's first Six Nations win after a 36-game winless streak that stretched back over seven years. There were scenes of pure jubilation and ecstasy at the final whistle as the Italian players realised they had done it. 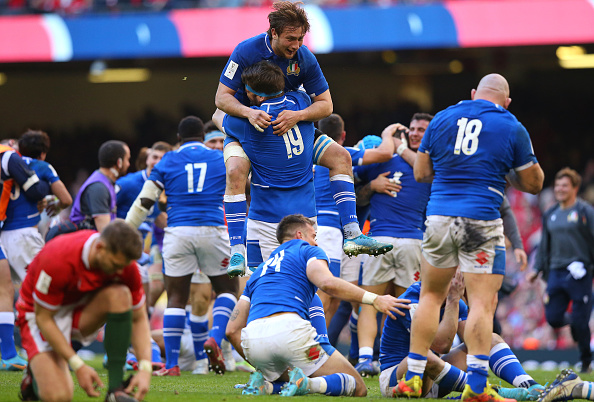 The players of Italy celebrate after the Six Nations Rugby match between Wales and Italy at Principality Stadium. (Photo by Alex Livesey/Federugby/Getty Images)

As the Italian players celebrated on the pitch, Josh Adams, who had been awarded a medal for getting the Man of the Match shout, sought out Capuozzo.

In a class and touching gesture, he handed over his medal to the shocked Capuozzo.

Sportsmanship at it's finest 👏

Josh Adams gives his POTM medal to Ange Capuozzo after his sensational display helped Italy to their first ever win in Wales 🙌#GuinnessSixNations #WALvITA pic.twitter.com/CTj9q8JJvg


popular
Cristiano Ronaldo 'agrees £173m-a-year deal' with Saudi club
Castleknock's Warnock the hero as Maynooth win first ever Ryan Cup final
Damien Duff makes 'brutally honest' England World Cup prediction after Wales win
"Nowadays, even if I don't hit a ball, I don't care as long as we win" - Gleeson learning from the past
World Cup 2022 Day 11: All the major action and talking points
Argentina reach World Cup last-16 with convincing win over Poland
Thibaut Courtois warns teammates after leaks emerge from Belgium camp
You may also like
1 week ago
"Two Irish players are best in the world" - Rugby reacts to big Josh van der Flier and Terry Kennedy awards
1 week ago
Two baffling omissions as four Ireland stars make World Rugby 'Dream Team' of the Year
1 week ago
Josh van der Flier claims World Rugby Player of the Year at Monaco ceremony
1 week ago
"Highlight of my Ireland career" - Behind the scenes as Jack Crowley and Ross Byrne covered for a legend
1 week ago
Bundee Aki reminded us all of his best qualities, on a night Ireland couldn't do without him
1 week ago
Peter O'Mahony delivered some fitting Jack Crowley comments after surprise Test start
Next Page