A damn good team, but one glaring omission.

The end of the year has seen a stack of awards being handed out and 'best player' and 'best team' accolades being decided upon. Johnny Sexton has featured heavily in a lot of prize-givng and 'Best Team' categories.

The World Rugby awards were close to a green sweep, a fortnight ago, as Ireland took home the Best Team, Coach (Joe Schmidt) and Player (Johnny Sexton) prizes.

Not to be left out, our UK counterparts ran a massive Team of the Year vote over the course of a week. More than 175,000 votes came in and the resulting team sees the All Blacks win six inclusions, four for Ireland, two Wallabies and one apiece for England, Wales and South Africa. 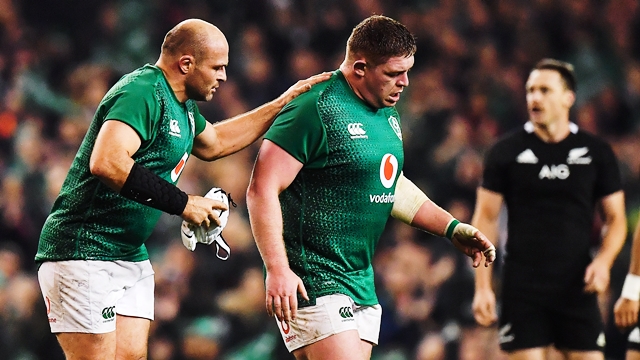 There will be few complaints with Tadhg Furlong and Cian Healy making the front row, along with Springboks' dynamic hooker Malcolm Marx. The second row has All Blacks Bridie Retallick and Sam Whitelock but, controversially, no place for Leinster and Ireland star James Ryan.

There are two Aussies - David Pocock and Michael Hooper - in the back row with Peter O'Mahony. Conor Murray beat out Faf de Klerk and Aaron Smith for scrum-half while - and this was the closest call - Beauden Barrett edged out Johnny Sexton.

Jonathan Davies of Wales and Owen Farrell are the midfield pairing while the back three is all Kiwi - Rieko Ioane (12 tries in 12 Test matches this year), Ben Smith and Damien McKenzie.

Not a bad looking team at all, but the likes of Sexton, Ryan, Bundee Aki, CJ Stander, Dan Leavy, Rob Kearney, Garry Ringrose and Keith Earls all would have been with a decent shout of making the final XV.

popular
The SportsJOE 12 o'clock quiz | Day 145
Leinster star Hugo Keenan has beaten Beauden Barrett's 'Bronco' time
300/1 winner makes history at Leopardstown
"No doubt he'll say he played shit like he normally does, but I thought it was a good game."
The SportsJOE 12 o'clock quiz | Day 144
QUIZ: Beat the clock to name the Premier League assist kings
Joe Rogan reveals he could be parting ways with the UFC
You may also like
2 days ago
"It was a serious boost for Andy Farrell to give me a bit of a shout-out" - Ian Madigan
3 days ago
QUIZ: Can you name every Irish goalscorer from the 2019/20 Premier League?
1 week ago
James Ryan's misfortune opens Leinster and Ireland doors for Ryan Baird
3 weeks ago
Ireland set for Six Nations decider in Paris on October 31
3 weeks ago
We challenge any rugby player to top Jack McGrath's lockdown hobby
4 weeks ago
James McClean opens up on sickening, Covid-related hate mail
Next Page