"I thought tonight was there for the taking, we'll look back on that with a lot of regrets."

Johnny Sexton called many of the decisions made by himself and the Irish leadership corps "brave", but you would have to wonder if England's failure to throttle Italy scrambled their thinking.

Whenever France play like they did against Ireland - creating tries out of nothing and capitalising on mistakes to maximum effect - it makes fans long for their team to play likewise. Ahead of the final day of the Six Nations, former Ireland captain Paul O'Connell spoke about how the men in green had turned the table from 2009 on.

"When there wasn’t that much technical coaching in rugby, they used to beat us. In recent years, certainly since 2009, the games have become technical and tactical and their emotion, flair and passion hasn’t played as big a role.

"And I certainly think Ireland’s biggest strength is our smarts as rugby players. And French players haven’t had that in the last few years, they’re getting better at it and investing in coaches but they still  give you good opportunities that we don’t give them.

END_OF_DOCUMENT_TOKEN_TO_BE_REPLACED

If you discount the two World Cup warm-up games in 2011, Ireland beat France seven times in 13 Test matches and drew two more. From March 2014 up until the game on Saturday, Ireland had won six out of the last seven meetings.

And yet, in the lead-up to the game, France boss Fabien Galthie was confident about his side's chances. He back his half-backs Antoine Dupont and Romain Ntamack to roll with it and make up the right plays on the fly. Ireland, said Galthie, were wedded to their structures and game-plans.

It was an opinion that served Ireland well during Joe Schmidt's era and O'Connell did not see that changing much as Andy Farrell prepared for his first game as head coach against Les Bleus.

"They'll have a plan to beat France and it will be a question of sticking to that," said O'Connell. "That plan won't change whether they need four tries or not." 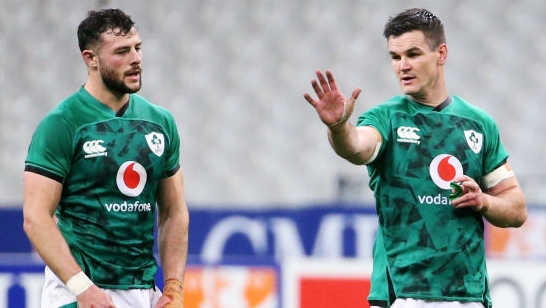 And then came Italy's dogged performance in Rome. They fell behind to an early Ben Youngs try but they got back in the game through Jake Polledri and only trailed 10-5 at the break. England ended up winning 34-5 but, all of a sudden, Ireland did not need to go gung-ho for the bonus point win.

END_OF_DOCUMENT_TOKEN_TO_BE_REPLACED

There path to the title still had France in the way, but a win by six points or more (as long as they scored one try on the night) would be enough. The Irish players had an hour to register that, but I'm not sure if they did.

It sure looked like they did, early on, when Conor Murray put his hand up for a 57-metre penalty attempt. By taking the points on offer, Ireland could build a lead against France and put them out of the championship picture. Murray missed and Gael Fickou scorched poor Andrew Porter down the left wing and Ireland told themselves they could only answer tries with tries.

Following Ireland's 35-27 loss to France, Sexton spoke about making those brave decisions - to turn down kicks at goals for attacking lineouts, and going for tries. Asked if he had any regrets about spurning kicks at goal, Sexton responded:

"Just before half-time, we could have taken three and tried to go in in the lead (Note: they would have gone in 17-16 behind) but we knew we had to win the game by more than six or get more tries so we were trying your best to put the pressure on because we knew the French team, with the players they have, could score tries from nothing.

"It's a bit like when you are playing the All Blacks, you have to have the mentality to go out and score tries. Sometimes it comes off and sometimes it doesn't. The decision I thought was brave."

Sexton and his team still had it in their head that they could only beat France by scoring tries. France, and their myriad of attacking threats, were in their head.

One can understand why they went to drive over for tries when Anthony Bouthier was in the sin-bin, but the decision to turn down a penalty just to the right of the posts, on half-time, was a poor one. Not being in the sparsely populated Stade de France, on Saturday, it is hard to get a feel for what was going through the heads of Sexton and his teammates. Watching on TV, though, it was clear as day that they should go for the three points.

Ireland went from hanging on, at 17-13 down and with Caelan Doris in the sin-bin, to getting a chance to soften French coughs with a simple penalty. They kicking for the attacking lineout, didn't cause France much trouble at all and were penalised at the breakdown by Wayne Barnes. France must have floated back to their dressing room.

After the break, Ireland lost their composure while France took advantage of the broken play that opened up around them. Dupont and Ntamack were a joy to watch:

Asked, post-match, about Dupont and Ntamack, Sexton commented, "They can create something out of nothing, can't they?

"They've shown that again. We knew that was going to be the case... I thought we coped well enough with them at times and that there were other teams where we didn't put enough pressure on them. That's the reason why. We knew they could score tries from nothing and that's what they've done throughout the championship and another reason why we were quite aggressive in our decision-making."

That aggression and Irish mentality that they needed to score tries to have any chance had been ingrained in all of their preparations. When England looked like they had fallen short, in Rome, Ireland's players stuck with the game-plan when a steady accumulation of points could have sapped France's will.

Just look at how Warren Gatland's Wales beat Ireland in March 2019 to win the Grand Slam. They scored through Hadleigh Parkes off a set-play then took penalty on penalty as they ground Ireland's outside title hopes to dust. It wasn't pretty but it was effective.

Ireland were doing superbly in the scrum and were the better side, in that opening 40 minutes, in tight and won some crucial turnovers and penalties. But the leadership corps were conditioned to chase tries. Their greatest strength for years - sticking to a game-plans and being structured - became their biggest weakness in Paris.

We went out swinging haymakers and left ourselves open to the knock-out blows.


popular
Talksport presenter puts Martin O'Neill to the pin of his collar over Declan Rice and Jack Grealish
Rory McIlroy explains 'falling out' with Shane Lowry that lasted a few years
The FootballJOE Qatar World Cup 2022 Geography Quiz
Roy Keane scores winning goal past Micah Richards in ITV v BBC pundits match
Ariel Helwani shares Paddy Pimblett WhatsApp messages as spat becomes public
World Cup Power Rankings: The top eight pundits of the tournament so far
World Cup Power Rankings: The top 10 players at the tournament ahead of the quarter-finals
You may also like
6 days ago
Shay Given on how far Ireland could've gone at the 2002 World Cup with Roy Keane in the team
1 week ago
From Ireland to Argentina: Alexis Mac Allister's Irish roots explained
1 week ago
Former England international admits he wishes he had played for Ireland
2 weeks ago
Two baffling omissions as four Ireland stars make World Rugby 'Dream Team' of the Year
2 weeks ago
Josh van der Flier claims World Rugby Player of the Year at Monaco ceremony
2 weeks ago
"Highlight of my Ireland career" - Behind the scenes as Jack Crowley and Ross Byrne covered for a legend
Next Page