It would be tempting for Warren Gatland to look at what Saracens are doing right now and follow the template.

The reigning Premiership and European champions allow teams expend all the energy they want getting up to their 22 before ramping up the gears and intensity. They guard their tryline with a manic pride and wear you down to, and beyond, breaking point.

Munster threw the kitchen and bathroom sinks at Saracens on Saturday and got next to nothing for it. Their frustration was evident when Tyler Bleyendaal took an ill-advised drop goal from 40 metres out after 18 fruitless phases left them out of ideas.

END_OF_DOCUMENT_TOKEN_TO_BE_REPLACED

The All Blacks will come harder and they will not let up. Munster went for 45 minutes, the All Blacks can go for 85 and they can do it at two levels above Champions Cup standard.

The task is a mighty one and Gatland will need to implement a game-plan pretty quickly - one that is simple to follow, focuses on a few key strengths and attempts to nullify the All Blacks' biggest threats. How he uses Johnny Sexton and Owen Farrell will be key in how he plans to take on the world champions. 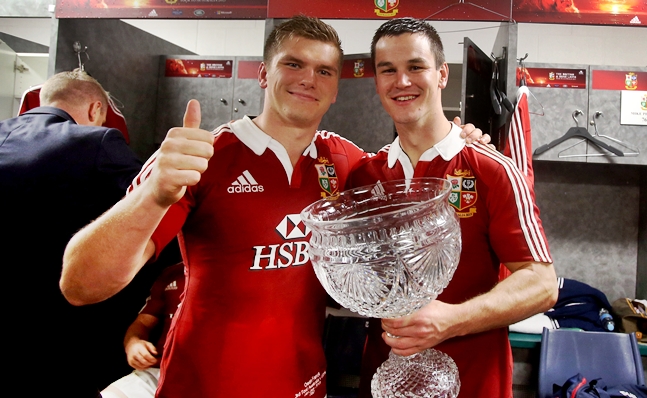 Farrell was superb against Munster and epitomised that bullish Saracens spirit that has served them so well. With Munster eager to implement a kicking game, Farrell got the picture and gave it back in spades. His all-round play was neat, tidy and to the point. It was a classic, composed outhalf performance.

END_OF_DOCUMENT_TOKEN_TO_BE_REPLACED

Sexton came to life in the enthralling second half of Leinster's semi final loss to Clermont. Garry Ringrose got the 60-metre try but Sexton's drive and vision was vital in dragging his team back into the contest.

With Farrell targeting that Lions No.10 jersey, and speaking openly about it, Ronan O'Gara and Stephen Ferris discussed Gatland's big decision on The Hard Yards rugby podcast [from 24:50 below].

Ferris feels the Lions will need more than solid goal-kickers to defeat New Zealand on home turf after O'Gara spoke about Leigh Halfpenny being favourite to start the First Test and fullback and take the kicking duties.

O'Gara would pick Conor Murray and Sexton as his half backs but feels Farrell is so, so close to starting at No.10.

"I view Farrell as a ten. They could pick Rhys Webb and Farrell and they wouldn't be losing anything. That's an area of strength.

He added, "Will they be able to leave Farrell out of a Test team? I'm not sure. It's going to be very difficult. I'm not in favour of the idea of starting a Test game with two tens and playing one of them at twelve. I know he does it for England but I think he's far better at outhalf when he does it for Saracens...

"You see the best of Farrell when he is at 10 and he has the ability to dominate a game. Between him and Johnny it will be a right tussle. Will they move him to twelve? I'm not sure but there is no stand-out centre."

END_OF_DOCUMENT_TOKEN_TO_BE_REPLACED

O'Gara would go for a midfield of Robbie Henshaw and Jonathan Davies but Gatland may well be tempted to go with Sexton at 10 with Farrell in the 12 jersey. Interestingly, Farrell is said to be a fan of Henshaw's game so they could yet form the 12-13 axis.

Leaving Farrell on the bench would certainly be a controversial call but he would be some calibre of star to bring into the fray.


popular
"I went up to the Italians and gave them a big auld shoulder" - Paul O'Donovan does it again
Wexford, Waterford and Kilkenny down some good men as Australia calls
Wexford Under-20 lights it up as Ferns win their first ever county title
Man United have 'decided to sell' promising midfielder James Garner
Graeme Souness under fire for calling football a ‘man’s game' while sat with Karen Carney
Luke Chadwick recalls furious Alex Ferguson reaction when he rejected loan move
Erik ten Hag's training ground punishment for Man United shows there may be hope yet
You may also like
3 years ago
James Haskell's first Lions Tour encounter with Tadhg Furlong was certainly unforgettable
4 years ago
Garry Ringrose only needed two games to expose regrettable Warren Gatland decision
4 years ago
Warren Gatland reveals concerns about Fields of Athenry before Lions Tour
4 years ago
Ben Te'o was rightly livid after some sneaky jersey swapping on the Lions Tour
4 years ago
Two Ireland stars included in French outlet's Team of the Year
4 years ago
2017 ended the debate about Johnny Sexton being Ireland's greatest outhalf
Next Page