Johnny Sexton on his post-match message to "great" Marcus Smith

"Something stood to me from my time in France!"

Johnny Sexton was taking his seat at the post-match press conference, at Twickenham, when Cristiano Ronaldo bagged his third goal against Tottenham in what ended up being a 3-2 win.

A Manchester United fan (as if he does not have enough sporting drama in his life), Sexton grinned broadly as he got confirmation that it was the hat-trick goal from Ronaldo. A year younger than the Portuguese goal savage, Sexton had even more reason to enjoy this 32-15 victory over England.

END_OF_DOCUMENT_TOKEN_TO_BE_REPLACED

After confirming he will retire at the 2023 World Cup, we have already reached the stage of 'final games' for Sexton. Today was his last Six Nations game at Twickenham, and it could be the final time he ever plays in England's rugby HQ [depending on Leinster games or possible World Cup warm-ups].

He was on the receiving end of some boos and jeers as he lined up kicks, especially early on, but joked that his time with Racing 92 got him well used to hostile away crowds.

Ireland made hard-going of their win over England, who were reduced to 14 men after only 82 seconds. In the end, though, they secured a bonus point win, can wrap up a Triple Crown next weekend and are still on the coat-tails of Grand Slam chasing France.

There was even enough of a cushion to take Sexton off, for Joey Carbery, with a couple of minutes to play. He jogged off to the clamour of the several thousand Irish fans at Twickenham, and the silent but grudging respect of many home supporters. Sexton later said he was walking off slowly to chew some more time off the clock. Ever the cagey pro.

Following the game, Sexton also got to speak with opposite No.10 Marcus Smith. The Ireland captain later shared what he said to the young Harlequins star. 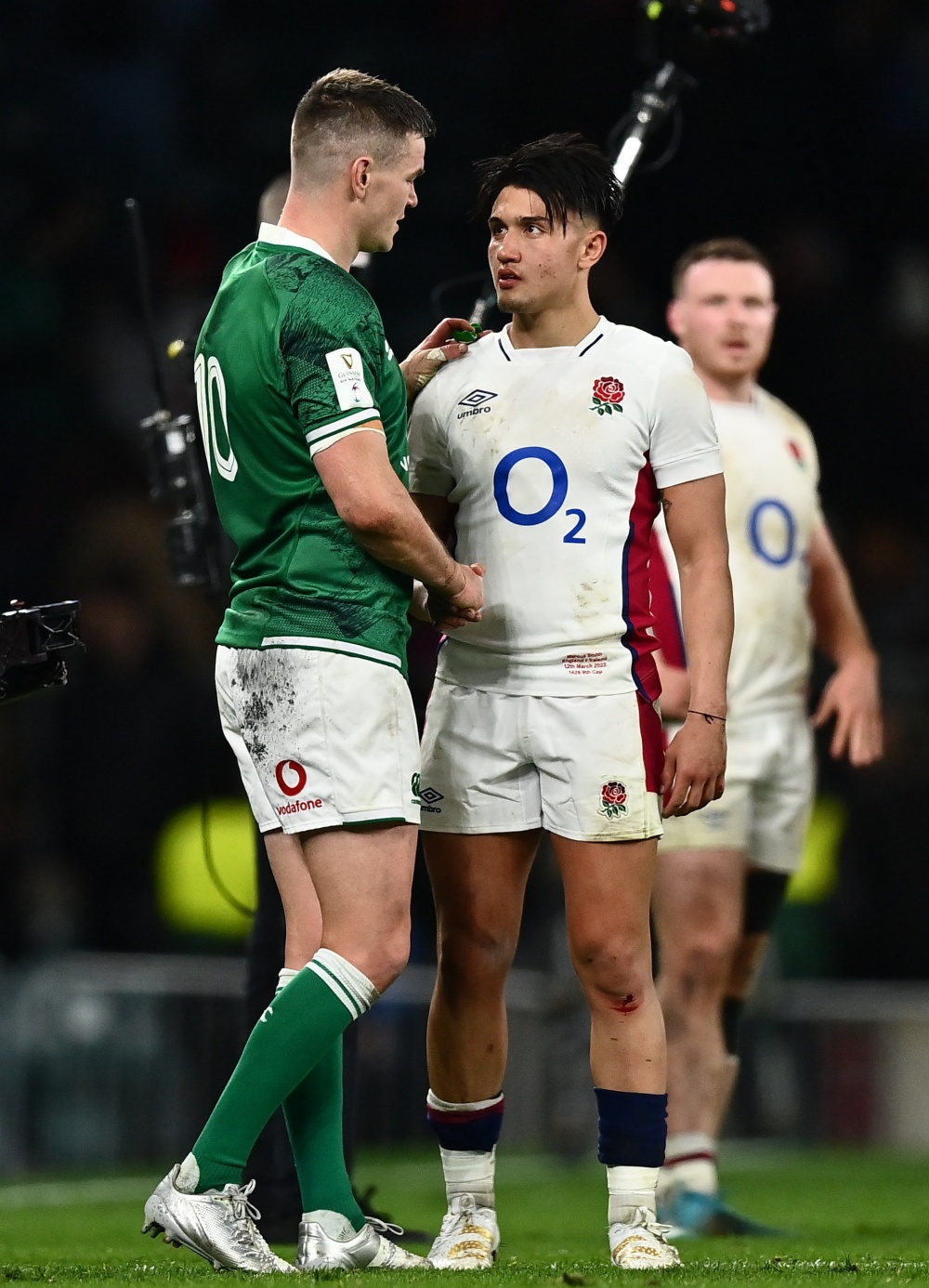 Johnny Sexton on what he said to Marcus Smith

END_OF_DOCUMENT_TOKEN_TO_BE_REPLACED

As if the initial omission of Johnny Sexton from the British & Irish Lions squad to tour South Africa was not perplexing enough, Warren Gatland decided, in June, that Marcus Smith would be a late call-up when Finn Russell picked up a knock.

It is no knock on either Smith or Russell to say Sexton should have been the first outhalf on Gatland's list for that tour.

As it was, Sexton took the summer off to rest up (and stew), while Smith acquitted himself well on that Lions Tour. Following the game, Sexton sought out the 23-year-old for a few words. Asked what he said to Smith, the Ireland captain revealed:

"It was more congratulating Marcus on what he has done so far. It's probably the first time I have ever met him, or played against him.

"I just congratulated him on controlling the game very well with 14 men, and said best of luck next week [against France] and I hope that he wins! But, like I said during the week, he's a great player and he has a huge career ahead of him."

From the post-match images that have circulated, Smith seemed to appreciate Sexton seeking him out for a few words.

The England outhalf another another fine Test outing and will be hoping to end the championship on a personal and a team high by denying France the Grand Slam with a win in Paris.