"Yeah, we couldn’t have done it without Jordan Larmour, Garry, Joey, these young guys have been exceptional."

That is just a selection of the experienced Ireland internationals either missing through injury or not required by Joe Schmidt and his coaching staff during the 2018 Six Nations.

Instead, Schmidt backed many of the young men whom he had give debuts to over a highly instrumental 18 month period in Irish rugby. Never before have so many raw, young talents been pitched in at Test level and told to enjoy themselves, but to get the job bloody well done.

Andy Farrell may have been the one doling out the expletives but the direction from Schmidt was clear - we're backing you, now don't let us down.

On Saturday, having been forced to watch much of the action from the sidelines, Carbery got ample chance. He did not shirk and delivered when it mattered.

He entered the fray just after England had scored through Elliot Daly, with Johnny Sexton off as a blood sub and Peter O'Mahony in the sin-bin. The 22-year-old got straight into it, called plenty of ball on himself, made a couple of nice breaks, hearty tackles and kicked a touchline conversion after Stockdale's try.

On The Hard Yards, former Munster and Ireland centre James Downey was [from 9:00 below] was glowing in his praise of the Leinster player. Downey also spotted a class moment between Carbery and Sexton at half-time. 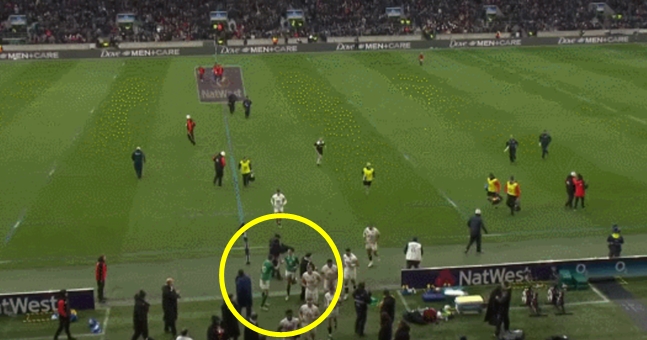 "Joey nailed a touchline conversation and, I don't know if you caught, but Johnny was stood on the sideline as he came off. All the players ran off at half-time but Johnny waited until Joey came over.

"He high-fived him, patted him on the back of the head and the two of them ran in together. It was just that unity and togetherness; it's great."

It was a lovely gesture from one man who is playing at the top of his game to keep the other away from his No.10 jersey.

"The influence Johnny is having on Joey is immense," said McLaughlin.

"He's shadowing Johnny in training, do the plays, watching how about he goes about his kicking practice. It is immense for him."

Teammates and rivals but the respect both men have for each other is clear.


popular
QUIZ: Name every player that's scored three or more Premier League hat-tricks
The SportsJOE 12 o'clock quiz | Day 110
The SportsJOE 12 o'clock quiz | Day 109
'ROG was the kingpin... he just wanted to win, win, win' - Barry Murphy
"Some of the guys have put a lot into it" - Felipe Contepomi confident Leinster can start fast
SportsJOE 2000s Football Quiz | Round 9
What Leinster's strongest XV looks like when everyone is available
You may also like
3 months ago
Baz & Andrew's House of Rugby - Red card frenzy
4 months ago
Ireland v France postponed, Wales v Scotland still going ahead
4 months ago
The Ireland XV that should start against France
4 months ago
Scotland deliver knock-out blow to French Grand Slam
4 months ago
Manu Tuilagi sees red as England clinch Triple Crown
4 months ago
Saracens and England at odds over Mako Vunipola Coronavirus "precaution"
Next Page