"It's very Irish to think, 'Oh, we have to take it easy now until the World Cup'"

The scar tissue is considerable, at this stage.

Being around this Ireland squad, and their back-room team, must be an uplifting experience.

Tadhg Beirne outlined, on Saturday night in Wellington, how the players had sat together after they had conceded six tries in losing 42-19 to the All Blacks and confidently told each other, we've got this.

END_OF_DOCUMENT_TOKEN_TO_BE_REPLACED

When you consider that Leinster, the province with the biggest squad representation and the ones that had the most to take from last season, had lost out in a European final and a home semi-final, it had been a brutal four weeks.

Before the squad flew out to New Zealand, they all looked at each other in the eyes and agreed that making history in New Zealand was possible. Then they got tonked in their first two games.

To turn it around from there and win the final three tour games - clinching the Test Series 2-1, in the process - at the end of a gruelling season, in a country that eats, sleeps and breathes rugby is some going.

The All Blacks look to be a team trying to rediscover what makes them so good, but they still had a line-up that included Codie Taylor, Sam Whitelock, Brodie Retallick, Ardie Savea, Sam Cane, Aaron Smith, Beauden Barrett, Rieko Ioane and Jordie Barettt. Ireland beat them, and beat them well.

Following the game, Ireland captain Johnny Sexton spoke of his pride in leading his players, and tackled that most Irish of fears - GETTING AHEAD OF OURSELVES. 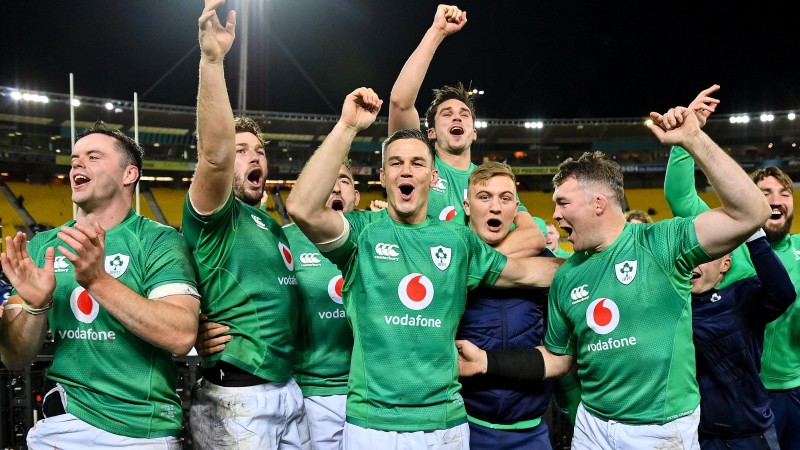 END_OF_DOCUMENT_TOKEN_TO_BE_REPLACED

In the press briefing room of Sky Stadium, in Wellington, still in his match kit and with head coach Andy Farrell by his side, Johnny Sexton explained that the sheer wildness of Irish celebrations were no disrespect to New Zealand.

It simply showed, he explained, how much a Test Series win over a side that have long been the standard bearers of elite rugby meant to all involved.

He was then asked that inevitable question about the World Cup and if Ireland could ride this wave for another 15 months. Until Ireland reach a World Cup semi-final, final or win the whole lot, fear of failure on the biggest stage will haunt many on this island.

Ireland reached No.1 in the world ahead of the 2019 World Cup, topped their pool and then got flayed by New Zealand in a thoroughly one-sided quarter final. Number one again, Sexton addressed that most Irish of fears with some wise words.

"We've got a full season to play and it shouldn't be, 'Beat New Zealand and let's wait for the World Cup'," he said.

"There’s plenty more to play. There are big home games in November, there’s a Six Nations to play where we still haven’t achieved things we want to achieve in that.

"We got a Triple Crown this year but a championship or better would be something we’re aiming for, so there’s no reason why we shouldn’t be trying to progress and do that.

"It’s very Irish to think, 'Oh, we have to take it easy now until the World Cup'. No, let’s keep making the most of it, let’s keep getting better."

A big Roy Keane fan, those words would surely have the former Manchester United and Ireland captain nodding in approval.

What will help Ireland massively, over the next season, is if more younger players step forward and start pressing to break into this history-making squad.


popular
"I've never seen anything like it" - Pitiful Manchester United reach new low at Brentford
Barcelona allowed to register four new signings, but Jules Kounde misses out
"He can add something to our attacking line up" - Jamie Clarke signs for Northern Irish soccer club
Gary Neville highlights Erik ten Hag decision that 'backfired spectacularly' at Brentford
Ranking the best county GAA songs of all-time (32-1)
Erling Haaland registers strange statistic on home debut as Mark Travers keeps the City score down
"It was unfair on the Galway backs” - Tomás Ó Sé admits that Kerry benefitted from unfair rule
You may also like
2 weeks ago
“My confidence was on the deck" - Aaron Connolly explains why he has made the move to Italy
2 weeks ago
Every Irish transfer in football, this summer, as several big deals get done
3 weeks ago
Six Irish players make damn impressive 'World XV' that would take some beating
3 weeks ago
The frontrunners for Ireland's 33-man squad for the 2023 World Cup
3 weeks ago
All Blacks media manager explains why Ian Foster appearance was cancelled after Ireland defeat
3 weeks ago
Warren Gatland selects nine Irish players in his strongest Lions XV, right now
Next Page