"I am pretty lost for words."

Johnny Sexton now has four European Cup winners medals and two runners-up medals. You get the sense he may, in the years to come, linger more on those two medals he picked up as recently as 2019 and last Saturday in Marseille.

Sexton, like many of his Leinster teammates, was boxed in and pressured intensely from the get-go. La Rochelle were determined not to allow Leinster to spring from the gates, as they had against Connacht, Leicester and Toulouse in the knock-out stages. Even if they had to give away penalties - and that they did - it was better than conceding tries. Just stay in the fight.

END_OF_DOCUMENT_TOKEN_TO_BE_REPLACED

Leinster took an early lead, but a Raymond Rhule try gave the French side hope and brought extra decibels from their passionate supporters. When Sexton commented, post-match, that 'it felt like an away game', what he meant was the Stade Rochelais faithful made their side feel at home.

"I am pretty lost for words. We didn't play our best game and we weren't allowed to play our best," Sexton admitted, after the game.

"We will have to take a look at that before we can point any fingers. There were a few things at the end of the game that I don't understand... It's devastating, although fair play to La Rochelle. They came with a plan and I didn't see them coming back after the lead we had built."

Sexton reflected that Leinster could have gone for kicks to touch and attacking lineouts, or even quick-taps, when they had penalties awarded to them. Instead, the Irish province played cup rugby and took their points. It was working, too, right up until the 79th minute. 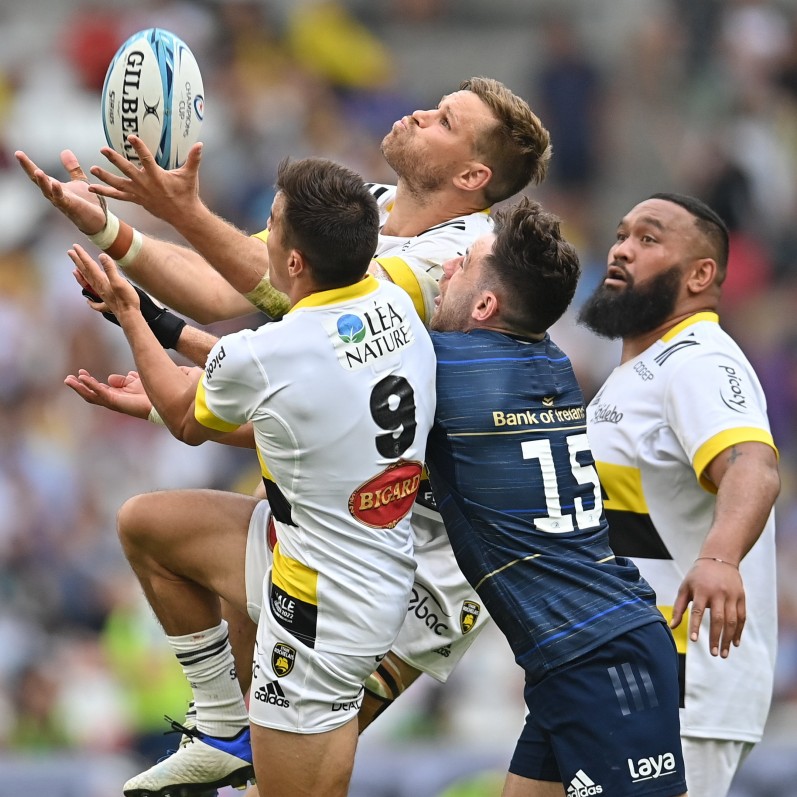 Sexton had implied there were questionable calls made in the final stages, in the press briefing and in TV interviews, but Leinster head coach Leo Cullen would not leave any shadow hanging over Wayne Barnes and his fellow match officials. There were tough calls that went against his side, he mused, but that is what happens in the heat of rugby battle.

END_OF_DOCUMENT_TOKEN_TO_BE_REPLACED

There were a couple of tough calls, for Johnny Sexton and Hugo Keenan, in French outlet Rugbyrama too. The website, linked to the Midi Olympique paper, often runs a 'Tops' and 'Flops' article, after big games.

Leinster backs James Lowe and "tough" Robbie Henshaw joined La Rochelle players Pierre Bourgarit, Arthur Retiere and Raymond Rhule in the five-man 'Tops' selection. Sexton and Keenan, who had a foot in touch when under a late La Rochelle kick, giving them an attacking lineout, did not fare so well.

Writer Marc Duzan argued that Sexton 'did not have the impact that was expected of him', while noting how Keenan, at fullback, was not seen much with ball-in-hand and struggled under high balls.

In every cup final, there are heroes and villains, rejoicing and regret. Sexton and Keenan were not at their peak, but few around them in Leinster [dark] blue were.

And still, it was almost enough. The 2023 final in Dublin, next May, is already circled bright red in Leinster's plans for next season.


popular
Ballyhale's Colin Fennelly felt Ballygunner's victory speech was disrespectful
Eniola Aluko responds to criticism after on-air mistake on ITV
Brazil star responds after Roy Keane slates dancing celebrations
Rory McIlroy explains 'falling out' with Shane Lowry that lasted a few years
Roy Keane reacts to Brazil's jubilant celebrations in first half demolition job
World Cup 2022 Day 16: All the major action and talking points
Roy Keane handled Gary Neville’s goal celebration as most Irish fans would
You may also like
2 weeks ago
Alternative World Rugby Dream Team selected, with two extra Ireland stars
2 weeks ago
"Two Irish players are best in the world" - Rugby reacts to big Josh van der Flier and Terry Kennedy awards
2 weeks ago
Two baffling omissions as four Ireland stars make World Rugby 'Dream Team' of the Year
2 weeks ago
Josh van der Flier claims World Rugby Player of the Year at Monaco ceremony
2 weeks ago
"Highlight of my Ireland career" - Behind the scenes as Jack Crowley and Ross Byrne covered for a legend
2 weeks ago
Bundee Aki reminded us all of his best qualities, on a night Ireland couldn't do without him
Next Page