What a double act that would be.

Munster head coach Johann van Graan has refused to rule out a sensational return for Paul O'Connell and Ronan O'Gara.

Fresh from agreeing a contract extension which will keep him at Thomond Park to 2022, Van Graan was full of praise for the coaching talents of O'Connell and O'Gara.

Van Graan admitted that he has been in touch with the pair of Munster legends but wouldn't offer a definitive answer about the possibility of both or either returning to the province.

"Nothing's ever impossible. Paulie is doing some great work with Stade Francais and he's finishing up," Van Graan told Virgin Media Sport. "ROG has been absolutely fantastic at Crusaders and he's possibly the most sought-after coach in the world, if I'm not mistaken.

#WATCH Munster head coach Johann van Graan hasn’t ruled out a possible return to the province for Paul O'Connell or Ronan O’Gara as he looks to add to his coaching team for next season@SineadKissane @VMSportIE @Munsterrugby @Paul_OConnell @RonanOGara10 pic.twitter.com/uGX9mrY73a

"I've been in constant contact with them, but there's a lot of quality coaches all over the world and we'll do what's the best for Munster.

"Look, they're fantastic people and fantastic coaches. We're all on different journeys in our coaching paths, so I wouldn't say yes or no to that. We'll see what the future holds." 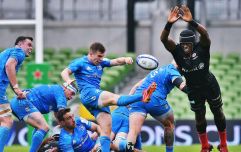 END_OF_DOCUMENT_TOKEN_TO_BE_REPLACED

O'Connell is set to leave Stade Francais at the end of the season and confirmed that he has no plans to continue coaching next term although the opportunity to return to Munster may change the legendary lock's mind on that matter.

O'Gara, meanwhile, has been linked with a role with the France team ahead of the World Cup but the former Ireland and Munster out-half dismissed those reports as premature.

"We’ve first got to sort out the guys that we currently have," van Graan said of his set-up.

"We as a coaching group are working very well together and obviously I came in mid-season last season and we got through last season, did all of our planning, and I’m really enjoying it.

"Everyone else is really enjoying it. We’re always open to adding some additional personnel. We’ll finish the year first and then make our decisions after."


popular
"Embarrassing. Horrendous" - Lewis Dunk slams referee after VAR shambles
MMA fighter with Nazi tattoos knocked out in three minutes
Sexton compares "brilliant" Irish debutant Craig Casey to Jonny Wilkinson
Owen Farrell rages at referee Pascal Gauzere as Wales catch England sleeping
Will Connors locks down No.7 jersey with two rapid succession plays
Three Irish forwards stand tall in player ratings after Italy thrashing
You may also like
2 months ago
Danny Care accuses Munster players of 'rolling around and diving'
4 months ago
"In the big games, and big moments, he's the type of guy you need around"
5 months ago
Heartbreak for Leinster is knowing they blew perfect five star opportunity
5 months ago
"It's hard to put into words what those two individuals mean to Leinster"
5 months ago
Leinster scrummed to death as Saracens remind everyone who's boss
5 months ago
The Alby Mathewson speech that lit a fire under Ulster
Next Page