"That typified it today."

Joey Carbery kicked 18 points for Ireland and ran their backline excellently, in the 53-7 win over Argentina, but there was a moment at the end of the game that really stood out for head coach Andy Farrell.

The Munster outhalf deputised well for Johnny Sexton as Ireland defeated Japan and New Zealand, this month, before getting his starting chance against Argentina.

END_OF_DOCUMENT_TOKEN_TO_BE_REPLACED

This was Carbery at his best. He passed crisply, kicked well, kept defenders guessing and tossed in a couple of swerving runs with ball-in-hand. He even switched to fullback for the final 30 minutes.

Carbery also teamed up with Josh van der Flier to force an Argentina knock-on and stood up well when the likes of Tomas Lavanini and Pablo Matera were running down his channel.

Farrell's face lit up, though, when one important Carbery tackle was brought up in the post-match press briefing. 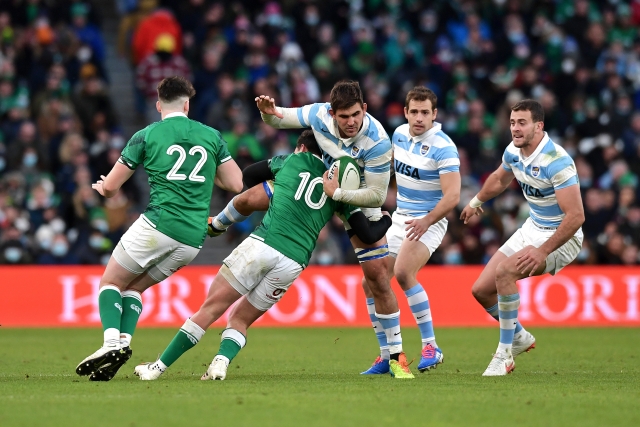 Pablo Matera of Argentina is tackled by Joey Carbery at the Aviva Stadium. (Photo by Charles McQuillan/Getty Images)

END_OF_DOCUMENT_TOKEN_TO_BE_REPLACED

As the clock wound down, and with Ireland already leading by 46 points, Argentina were pressing for a consolation try. They have been flogged over the past stretch and were seeking a score that could salve the wounds ever so slightly.

Los Pumas piled into the Ireland defence, camp around their tryline, then the ball was sprung wide. There was a three-on-one, but Carbery gambled by stepping up to block the passing lane. He then had to step back inside, to his right, and sink a tackle that prevented an offload.

In the grand scheme of things, all it did was preserve Ireland's hefty lead. To Farrell, though, that Joey Carbery moment was something the team would take great pleasure from. The Ireland coach commented:

"You guys have been asking questions about the most pleasing part of our game over the last few games. 100%, for us, it would be our defence. That typified it today.

"They were asking questions in the first half. They were physical. And the time that we had on our own line towards the end just epitomised that determination.

"You look at someone like Joey. In months or seasons gone by, you'd say he has to work on that. He's been working unbelievably hard. I think he's been exceptional, defensively, over the last few weeks."

Sure enough, Ireland held up the Argentineans over their tryline, and that was that. An eighth win on the trot, and by a sizeable margin too. 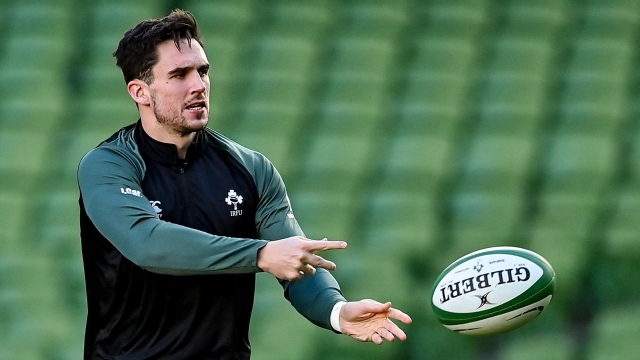 Joey Carbery will be pressing his case for more Ireland starts in 2022. (Photo by Brendan Moran/Sportsfile)

With Ireland captain James Ryan excused from press duties after leaving the game with a concussion, Peter O'Mahony was left to give his take on another impressive win.

He is delighted to see Joey Carbery shining at international level again, and playing a big part in another statement victory.

"He's an incredible professional, and he stuck at it and kept his head down. He's gathering momentum now that he hasn't had in a long time. He's putting together games back-to-back. He's been around the environment at Munster but it's different when you're back in squads and team environments.

"It's tough when you're rehabbing. I've been there, and it's a hard old place to be. He's had that tough period, but he's added to the environment and is enjoying it... he's driving it on."

The challenge for Carbery will be the one that Harry Byrne is facing once he links back up with Leinster - playing a stretch of games together and showing that he can take that positive Test experience and turn it into a consistent run of provincial form.


popular
The four stone-cold certainties for All-Stars even as early as this
"He's actually smiling putting the ball over the bar. He should nearly be fainting." - Ryall on Limerick's legacy
Eamon McGee just couldn't help himself with Armagh-melee tweet
Bizarre MLS rule means Inter Miami will get compensation for Gareth Bale transfer
"The economy was one of the big reasons" - Cadogan's move from an electrician to personal training
Full Ireland player ratings after Maori All Blacks teach us an early lesson
Kylian Mbappe reportedly wants PSG to sell Neymar
You may also like
11 hours ago
Bundee Aki understandably emotional, as Ireland pay moving tribute to late Sean Wainui
12 hours ago
Full Ireland player ratings after Maori All Blacks teach us an early lesson
1 day ago
"We could lose all five games" - Darren Cave with a rare take on Ireland's chances
1 day ago
Mike Lowry and Peter O'Mahony in First Test contention as Ireland shuffle deck
1 day ago
"Significant" knee injury ends Iain Henderson's tour of New Zealand
1 day ago
Ireland include plenty of new faces in team to face Maori All Blacks
Next Page