Joey Carbery kicked 18 points for Ireland, in their win over Argentina, looked excellent at outhalf for 50 minutes and did a fine job at fullback for the final 30 minutes. Greg O'Shea was not the only one singing his praises.

Following the 53-7 victory, Peter O'Mahony paid tribute to Carbery for battling back from persistent ankle and wrist injuries, Donal Lenihan awarded him Man of the Match [for RTÉ] while Andy Farrell was pleased as punch. The Ireland coach said:

END_OF_DOCUMENT_TOKEN_TO_BE_REPLACED

"He was good. His place-kicking was exceptional and that keeps the scoreboard ticking over. For him to be in charge for the full week with Johnny not being there was a great experience for Joey and he will learn more from that game."

Carbery made his Ireland debut in the Soldier Field win over New Zealand, in 2016, and has now made 27 Test appearances, nine of which were starts. He has never started a Six Nations game and, as well as he played this month, Farrell was not etching him into any XVs for next Februay or March. Not yet.

"We'll see," Farrell commented. "I’m sure other lads will have their say as well. I thought Harry Byrne came on and did pretty well and Jack Carty is doing very well. Billy Burns was really disappointed not to be here as well and they will go back to their clubs now."

On the latest House of Rugby URC episode [LISTEN from 2:30 below] former Ireland forward Mike McCarthy joined Greg O'Shea and Megan Williams discussed Carbery's positive impact and what it means, heading into the 2022 Six Nations. 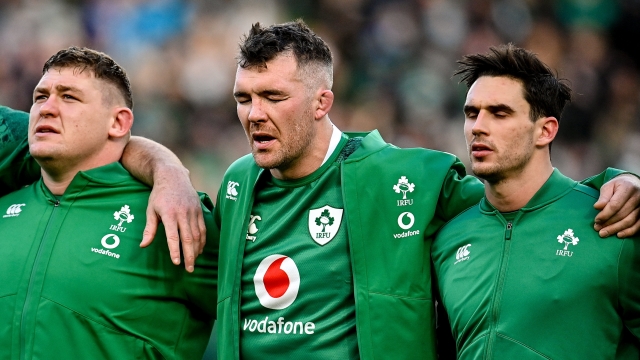 Tadhg Furlong, Peter O’Mahony and Joey Carbery of Ireland during the national anthem before the Argentina match at the Aviva Stadium. (Photo by Seb Daly/Sportsfile)

Heading into the Autumn Nations Series, Carbery's place in the Ireland squad was being openly debated. Ben Healy was putting the heat on, at Munster, while each province had their own candidate pressing to deputise Ireland captain Johnny Sexton.

The 26-year-old had a mere cameo role in the win over Japan, but got a good chunk of time - and kicked three penalties - in the All Blacks triumph before looked assured, and strong in defence, against Argentina. Greg O'Shea commented:

"Fair play to Joey, especially after getting so much stick the last couple of weeks. People were like, 'Oh, he's not up for it, like Harry Byrne, Ross Byrne, Jack Carty should be in.'

"Someone needs to step up like Sexton did with ROG in 2009. So, when he steps up and essentially says, I'm next in line for the jersey. Joey's performance was brilliant. It was great to see him come on against the All Blacks and see the game out. Three great kicks, one from the halfway line, and just steering the team around the park."

"He was just making breaks for fun," Mike McCarthy noted, "so I think he's back to where he is, or used to be before he got hurt. And now the club game in the next couple of months is going to be massive for those guys to keep putting our hands up for the Six Nations then coming."

It's back to work for Munster now, and Carbery will be pushing on now to get the starts in the big European and inter-provincial games.

He is in Johnny Sexton's slipstream now, and surely primed to break that odd Six Nations stat.