Irish rugby fans have seen a bit of needle in the interprovincial Guinness PRO14 fixtures, over the festive period, and most of it has merely added to the occasions. There were moments in Munster's win over Leinster, however, that got out of hand.

At four points of the first half, in Munster's 26-17 victory, referee Frank Murphy and his assistants had to call for calm heads as both sides threatened to kick off. Three cards were flashed in the first half, all at Leinster players, while the likes of Conor Murray, Johnny Sexton and Keith Earls were all fortunate to stay out of the sin-bin.

At one stage of a fractious first half, Murphy was forced to summon captains Sexton and CJ Stander to sternly warn that no more retribution and off-the-ball antagonism would be allowed.

Many supporters would have got equally riled up by the on- and off-field clashes but one wondered what Ireland head coach Joe Schmidt would make of it all. On Baz & Andrew's House of Rugby [from 24:00 below] former Ireland star Andrew Trimble offered an insight into how Schmidt looks upon excessive celebrations and players squaring up. 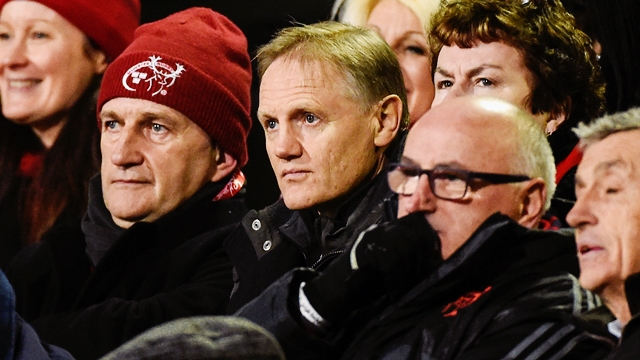 "I've had that contrasting experience with coaches and how they interpret that shirt-grabbing, confrontation and niggle," said Trimble.

"Joe Schmidt's argument would be, 'Be poker-faced. Don't have anything got to do with it because this has no effect on the rugby. The rugby is a separate thing altogether and we're going to beat you at rugby. If you want to carry on like this, go ahead'.

"He'd be like that with confrontational stuff but even more so with when you score tries. Be poker-faced. Let's get back and score another try."

That take is in stark contrast to that of Jono Gibbes, Schmidt's former assistant at Leinster and the ex-Ulster head coach. Gibbes' take would be 'if one of your buddies is getting a hard time, then let's all show up, be together and be strong'. 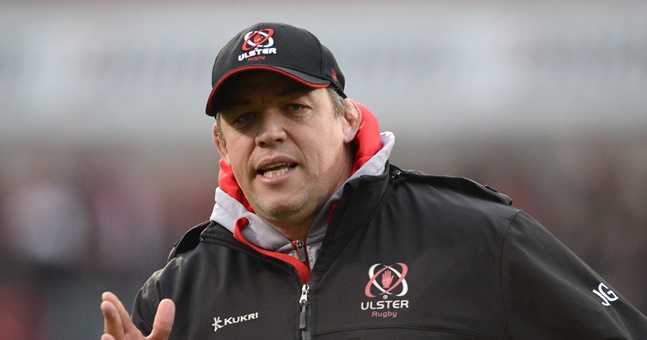 "He said, 'Lads, did we work hard for that try?' Yeah, of course. We trained hard and we executed the play.

"Then Jono says, 'So why do we not look happy? Why don't we get in, celebrate, enjoy that buzz, feed off each other and get that energy?'"

Schmidt, again, advises his players to be poker-faced after scoring tries because, according to Trimble, 'of course we score tries and this is what we do'. The former Ulster and Ireland winger can see value in both approaches but it goes to show how coaches differ on details most of us would overlook.

The Schmidt mentality is mirrored by Dublin under their boss Jim Gavin. The All-Ireland champions regularly react to goals or big points being scored by getting straight back into position or haranguing a team-mate to mark up. As former Westmeath boss Tom Cribben once told The GAA Hour:

"It's well known that, when Dublin get a goal, they work tremendously hard in their sessions at trying to get the next score at all costs to really put a question to the opposition."

This is what we do.

Barry Murphy, Trimble's co-host, notes how the current Munster team look to 'create their own buzz' with big on-field celebrations and shows of unity, especially when they are away from home.


popular
Shane Walsh provides one of the all-time great captain speeches as Tullaroan take a thriller
UFC star Donald Cerrone is missing half his intestines due to an accident
UFC 246 main card loses big fight after weigh-in fiasco
This was the incredible weight difference between Conor McGregor and Nate Diaz at UFC 196
"I probably should, but I don't think I will" - Cerrone vows to stand and scrap
Conor McGregor prepared to risk it all on next fight
Maximum prison sentence now facing Conor McGregor is 11 years
You may also like
3 days ago
Farrell names 5 new caps and Sexton captain in Six Nations squad
3 days ago
Baz & Andrew's House of Rugby - Munster on the ropes
3 days ago
Six Leinster players that could benefit from a provincial switch
4 days ago
Six uncapped players expected in Ireland's Six Nations squad
6 days ago
Max Deegan makes Six Nations statement as Leinster crush Lyon
1 week ago
"If McCloskey's gonna be in the mix, he's gotta be in the mix now"
Next Page