Joe Schmidt is not messing around, with this potent team to play England

Just the one change, with some manoeuvring on the Irish bench.

Joe Schmidt has named Jordi Murphy at No.8 and has kept faith in Jack McGrath, at loose-head, for the crucial Six Nations clash with England, on Sunday.

The Ireland head coach has freshened up his bench by drafting in Tommy O'Donnell and replacing one Leinster scrum-half, Isaac Boss, with another, Eoin Reddan.

END_OF_DOCUMENT_TOKEN_TO_BE_REPLACED

The backline is unchanged from the one that started against France, meaning the midfield partnership of Robbie Henshaw and Jared Payne get another chance to shine. Johnny Sexton starts after his 60-minute outing for Racing Métro last Saturday.

Paul O'Connell captains Ireland and packs down with McGrath, Rory Best, Mike Ross and Devin Toner. Murphy is in the back row with Peter O'Mahony and Sean O'Brien. 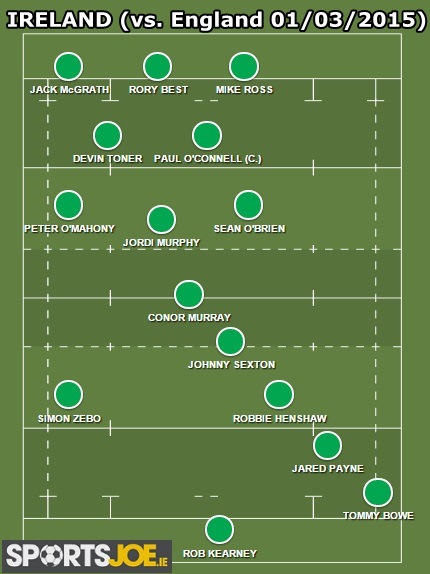 Ireland v England kicks off at 3pm, at the Aviva Stadium, on Sunday. Here is the England team for the match.