The gauntlet was thrown down.

Joe Schmidt is getting rightly lauded for his influential role in Ireland becoming Grand Slam champions for only the third time in their history.

The New Zealand native has worked his magic with Clermont Auvergne, Leinster and Ireland but he was crafting a decent coaching career back home before Vern Cotter convinced him to make for France.

Before he had ambitions of being a top coach, however, Schmidt dreamt about making his mark as a player. Following Ireland's Grand Slam triumph, at the weekend, Schmidt commented:

"Yeah, it’s hard to equate anything with this. When I was a kid I used to watch Five Nations on TV and think these places were on a whole different planet with those massive crowds. It’s pretty hard [to imagine] when you’re born in Kawakawa, 1,400 people and you’re shifted to the metropolis of Woodville - 1,600 people. It's huge."

Schmidt played 29 games for Manawatu, between 1988 and 1991, but went no further than that and began to focus on his teaching career - including an early 90s stint to Westmeath - and got into coaching. 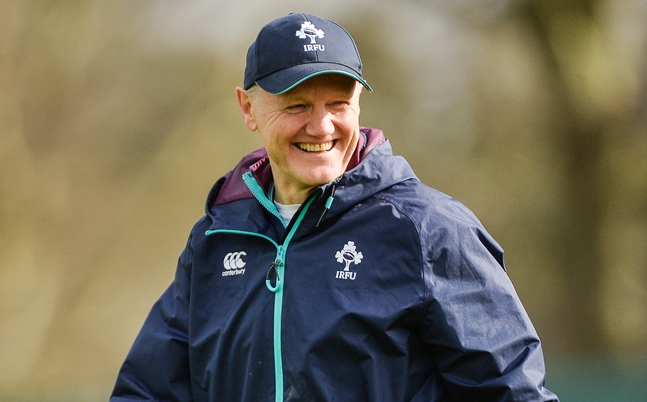 In an excellent Stuff feature on the Ireland coach, Shaun Eade caught up with former All Blacks star Mark Donaldson, who coached Schmidt at Manawatu. Donaldson spoke about initially dropping Schmidt, who was a winger, as he felt he was too small to make the grade. He comments:

"Joe was little. I remember I sort of laughed at him and said, 'Look mate, you are really doing well to do what you do in club footy but you just won't make my cut.'

"He showed his attitude and I really came to admire him. He went away to the gym – and no one was going to the gym in those days – and he put on about 11 or 12kg [almost two-stone]. He came back the next season in a totally different bloke. He gave me a slap in the face with what he achieved in the gym without losing his guile or speed and changing who he was.

"He was still bloody small but he caught my attention because he said, 'Right, you have put up a barrier, I have gone through it and this is what I have done'.

"That probably is the sort of insight as to why he is so resilient and resourceful as a coach."

END_OF_DOCUMENT_TOKEN_TO_BE_REPLACED

That commitment and physical improvement from Schmidt was enough to get him an extra season with Manawatu but he soon began to realise that coaching would have to be his way to make it in the game.

He had an assistant coach role [with Multyfarnham] during his stay in Westmeath and took over Palmerston North Boys' High School on his return to New Zealand. There were further appointments as assistant with the New Zealand Secondary Schools team, Bay of Plenty and Auckland Blues.

It was at Blues that he came across Isa Nacewa and it was Nacewa that recommended Schmidt for the top job at Leinster back in 2010, when Michael Cheika was heading back to Australia.

Ever since he arrived on these shores, he has shown the sort of resilience, dedication and cleverness that marked him out as a player to respect back in the early 1990s.

popular
The SportsJOE 12 o'clock quiz | Day 140
Frustration boils over for Shane Lowry at PGA Championship
Getting 20/20 in our Champions League quiz would be a miracle
"There's times I do think I probably have let people down but in fairness, I have got good support from back home"
Only a Champions League fanatic would get full marks in this quiz
Goal disallowed in Dublin SFC because player wasn't wearing his gumshield
Jonny Hayes and Aberdeen teammates apologise after Covid cluster shutdown
You may also like
2 weeks ago
Ireland set for Six Nations decider in Paris on October 31
3 weeks ago
We challenge any rugby player to top Jack McGrath's lockdown hobby
3 weeks ago
James McClean opens up on sickening, Covid-related hate mail
4 weeks ago
When the President interrupted a Euro 88 pint between Charlton and Dunphy
4 weeks ago
How an uncultured Englishman conquered Ireland's sporting heart
4 weeks ago
The SportsJOE 12 o'clock quiz | Jack Charlton special (Day 112)
Next Page