Joe Schmidt backed Ryan and Stockdale, now it's time to back Jordan Larmour

When you look back at Ireland's Grand Slam campaign there were so many positives.

Firstly, they won all their Six Nations games for the first time since 2009. Secondly, they showed real bottle against the likes of Wales at home and France away to pull out wins in games they could have easily had lost.

And thirdly, and maybe most impressively, Joe Schmidt brought through young guys like James Ryan, Jacob Stockdale and Dan Leavy into the starting side and they flourished.

Age and experience certainly helps in international rugby but the aforementioned trio of Ryan, Stockdale and Leavy had just eight caps between them before last year's November internationals and they went on to be three huge figures during the Six Nations run.

Granted, Ryan and Leavy would have had the likes of Rory Best, Devin Toner and Peter O'Mahony to lean on in the forward pack, while Stockdale was apart of a back three with veterans like Keith Earls and Rob Kearney, but all three thrived with a relative lack of experience. 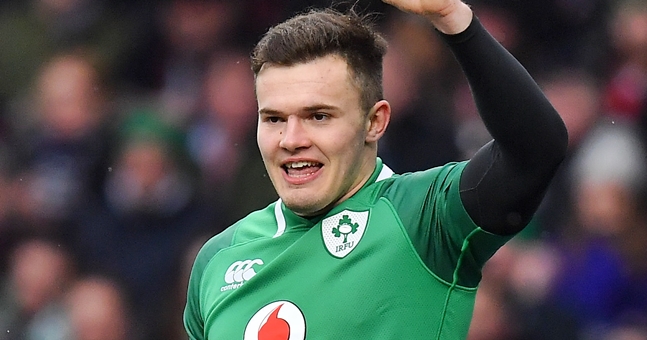 Increasingly in rugby we're seeing young players come through and shine from a very early stage of their careers.

Jordie Barrett played one game for the All Blacks before he was thrust into start a Test match against the British & Irish Lions last summer. Centre Ngani Laumape made his Test debut against the Lions and was a wrecking ball in the All Blacks midfield. Rieko Ioane was 20-years-old and had played just two matches before the Lions series last summer and was one of the players of the series for the world champions.

He's since kicked on and now has 22 tries in 21 Test matches.

Ireland will attempt to dethrone New Zealand next weekend and potentially claim their number one world ranking too but if the last year has thought us anything it's that talent is increasingly outweighing experience.

END_OF_DOCUMENT_TOKEN_TO_BE_REPLACED

Jordan Larmour was recently nominated for World Rugby's breakthrough player of the year award and he certainly has shown that he's as talented as the aforementioned but there's still some skepticism over whether he's done enough to dislodge Rob Kearney - who has scored one try from his last 79 games for club and country - from the starting full-back spot.

Schmidt has defended Kearney's place in the team repeatedly throughout his tenure and with three Six Nations titles in five years and a maiden Grand Slam to his name it's very hard to question his selections given the success he's had with his possession orientated gameplan. 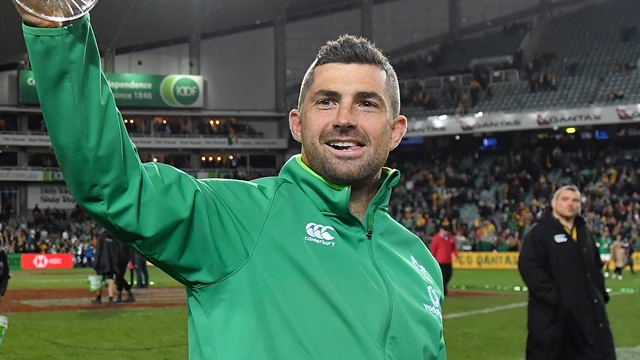 But with Kearney in doubt for this weekend's game with Argentina, surely Larmour is given another crack at full-back following his hat-trick performance against Italy?

Schmidt once dropped Ulster winger Craig Gilroy from the Ireland squad after he scored a hat-trick off the bench against the Italians, so as breathtaking as some of Larmour's tries were last weekend, and they were spectacular, scoring tries does not exactly guarantee you your place with the New Zealander, but instead of looking at his deficiencies and shortcomings as a player, we should look at what he offers.

Former Ireland head coach Eddie O'Sullivan said on Off The Ball on Monday night that Larmour could maybe improve defensively and the same was said for Stockdale last season before he went on to set a Six Nations try scoring record, including the match sealing intercept try against Wales.

If Schmidt wants to stick with Kearney at the back then it's very hard to argue with him as long as he keeps winning games and championships. The Kiwi coach employs a very specific gameplan and Kearney fulfills a very specific role, but if Kearney can't play there's no need to overcomplicate this, play the guy that leaves defenders for dead and scores tries. 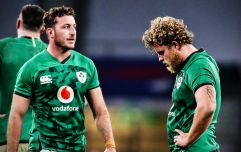 END_OF_DOCUMENT_TOKEN_TO_BE_REPLACED

Larmour was very much tested against Toulouse in the Champions Cup last month and it's those types of games that will accelerate his growth even if he's not dancing his way towards the try line.

If this guy is to be Ireland's full-back of the future, and there's no reason to believe he won't be, why not see what he can do starting against meaningful opposition?

Ryan and Stockdale were guys that had only played against the USA and Japan until last year's November internationals and they finished the season as two of Ireland's best players.

Their may be concerns over Larmour's ability to step up against the upper echelon of the Tier 1 nations but there would have been similar concerns for Jordie Barrett, Rieko Ioane, Ngani Laumape, Ryan and Stockdale too.

Their talent and performances quickly alleviated such worries, and if we think that Larmour belongs in the same breath as the aforementioned, and there's every reason we should based on his breakthrough nomination and the spectacular evidence we've seen from him with both Leinster and Ireland over the last season, then he should be given the opportunity to show that he can step up to the next level.

Similarly to Stockdale, you can stomach the odd defensive lapse if a player has the ability to score multiple tries and create tries for others.

But, then again, in the famous words of Alan Hansen, you can't win anything with kids..... unless they prove they're so much more.


popular
The SportsJOE 12 o'clock quiz | Day 249
The Ultimate Diego Maradona Quiz
"They don't care about mistakes once they're honest mistakes" - Buzz back for Bennett
Jose Mourinho leads tributes to 'Don Diego' as the world says thanks to Maradona
Sky Sports pundit calls out Katie Taylor during live broadcast
Much-changed Ireland team we'd like to see start against Georgia
The SportsJOE 12 o'clock quiz | Day 248
You may also like
2 days ago
Only one fresh face as Ireland make squad announcement
2 days ago
Much-changed Ireland team we'd like to see start against Georgia
3 days ago
Chris Farrell honesty what supporters deserve after latest Ireland loss
3 days ago
"Boys to men", insists Andy Farrell as Ireland hit string of bum notes
3 days ago
"We dominated physically" - Eddie Jones puts Ireland in their box again
4 days ago
Ireland may quit Peter O'Mahony, but Peter O'Mahony will never quit Ireland
Next Page