"It's about us growing as a group, and dealing with the pressure that's going to come our way."

For Joe McCarthy and Ireland's four other uncapped players, this summer's tour to New Zealand is a step into the unknown. However, given the Covid lockdowns and restrictions of late, the newbies are not alone.

During his press briefing, for the tour squad announcement, Andy Farrell made the point that Rónan Kelleher is now 18 caps deep and still has not gone on tour. By the time the 2023 World Cup rolls around, the Leinster hooker could be up to 25 caps and the same statement could hold true.

END_OF_DOCUMENT_TOKEN_TO_BE_REPLACED

Farrell is bringing 40 players with him to New Zealand, with another 29 members of a coaching and backroom staff that, when you add in the head coach, comes to 70. This is a big undertaking, and Farrell is itching for it.

He was practically giddy as he discussed the prospect of his young players walking down the streets of Dunedin, Hamilton and Auckland and meeting rugby fans with different perspectives, and opinions on them. In 2020, former Wallabies star Scott Fardy joked about some of his cloistered, younger teammates at Leinster.

"They all went to school with each other... some of them have known each other since they were 13. James Ryan put up a photo, recently, of him playing with Max Deegan at St Michael's when they were 12 or 13. And now they're playing together... most of my mates are working in the mines, plumbers or roofers, back in Australia!"

"They're so out of touch and so weird," a smiling Fardy added. "They never worked, or anything like that... none of them have been north of the Liffey!"

Farrell has definitely put his own stamp on this Ireland team. It is said, by those close to the camps, to be a more relaxed, player-driven environment than was in place under Joe Schmidt. A tour away for a few weeks has long been part of that culture-building process, and the Ireland coach cannot wait to get out of this country for a few weeks, even if they have to face the All Blacks three times in 14 days, and a crack Maori side on Wednesdays. 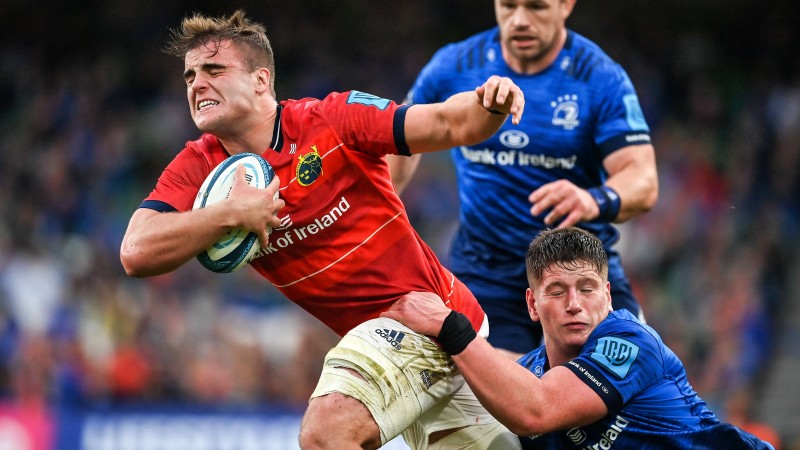 Alex Kendellen of Munster is tackled by Joe McCarthy of Leinster. (Photo by Brendan Moran/Sportsfile)

Having been born in New York, Joe McCarthy is not your typical south of the Liffey young prospect at Leinster that Scott Fardy would have joked about.

END_OF_DOCUMENT_TOKEN_TO_BE_REPLACED

McCarthy played his schools rugby with Willow Park and then Blackrock, before going on to represent Trinity College, like teammate Ryan Baird. He first got some national attention with the Ireland U20s in a 2020 Six Nations campaign that was cut short at three games due to the Covid pandemic.

He had to wait until this season to make his full Leinster debut, and has ended up starting eight of his 11 senior games. He was called into the Ireland training squad, earlier this year, and Andy Farrell has plans for him - all 6-foot-6 and 120kgs - as a tighthead lock that can add some heft to his pack.

Asked about the 21-year-old - one half of Trinity College's 'Bruise Brothers', with Ulster prospect Harry Sheridan - Andy Farrell was fulsome in his praise.

"I've been super impressed with Joe, he came into camp for two days and was himself straight away. He picked up things very quickly, and added to the quality of the training session and it just goes to show, because of all that, he's played in some big games at the end of the season.

"Although there were one or two errors in his [Bulls] game at the weekend, I thought he was excellent. He offered himself constantly, he was a threat to the line, he's got good footwork, great work-rate, good field awareness, he's not trying to play tidy all the time - he gets off the line, he's a menace at the breakdown.

"So, there's tremendous potential there. Hopefully we'll come away with a gem at the end of this tour, with Joe."

Having alluded to it in the IRFU release that came with his 40-man squad, we asked Farrell about this potentially being the last substantial tour to New Zealand.

"I'm yet to experience what's to come down the line, so I can only judge it on that, but I've grown up all my life on a three-Test tour, and I absolutely love it. I think three games... you go 1-0 down and you see the pressure building for the second game.

"It's not just the performances in a big game Test Series, there's also the ability to go around a country, see different places and get a feel for what life is like abroad. I suppose, when you're bouncing around from one country to the next, you'd just be in your bubble and all that tends to go out the window."

Future summer tours may include two Tests against 'Tier One' nations and sweeps to the likes of Japan, Tonga and Samoa. It will be different but, fot young rugby players, it will be no less memorable.