The England prop turned the other cheek, after bring turned upside down.

Harlequins and Exeter were always going to tear into each other from the off, but the double clear-out on prop Joe Marler was over-stepping the mark, and then some.

Quins and Exeter went into their Premiership clash knowing that it was not quite winner takes all, but winner gets to stay in Leicester Tigers slip-stream. Steve Borthwick's side have won 11 straight league games and the pressure on the chasing pack is huge.

END_OF_DOCUMENT_TOKEN_TO_BE_REPLACED

Having played a couple of classics against each other in recent years, fans were highly anticipating the afternoon clash. The hosts took an early lead through Luke Northmore, but when Joe Simmonds converted Henry Slade's 34th minute try, it was all square at 7-7.

The big talking point of the half arrived in the final stages as Marler dipped in to make a poach attempt after Jonny Hill had been tackled. Sam Simmonds went in from the side to lift Marler out of it and Alec Hepburn, with not enough consideration for the comprised prop, helped out.

Marler was already beyond the horizontal and, with his legs in the air, Hepburn dumped him to one side. There was not have been serious intent to harm Marler, but it was extremely reckless.

It doesn't look pretty in real time, nor in slow-motion.

Exeter Chiefs prop Alec Hepburn is sent off for this reckless clear out on Joe Marler.#GallagherPrem pic.twitter.com/W3oG3nfNnm

It was obvious from the moment the first replay was shown that a red card would be shown. The only question was, which Exeter Chiefs forward was getting it.

END_OF_DOCUMENT_TOKEN_TO_BE_REPLACED

In the end, Sam Simmonds was just looking to lift and clear Joe Marler out. It was Hepburn that arrived in and showed little care for his opponent. "A clear lift and a throw. No regard for No.1's safety, who just lands on his head," said the referee as replays rolled.

With the red card shown, Hepburn started jogging off, only to get summoned by Marler: 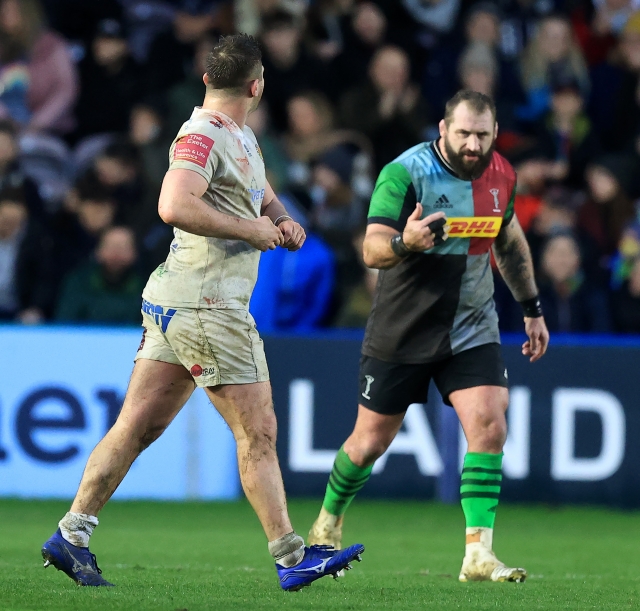 Joe Marler, (R) signals to Alec Hepburn of Exeter Chiefs after Hepburn was sent off, at Twickenham Stoop. (Photo by David Rogers/Getty Images)

Hepburn may have been expecting to cop an earful, but Marler approached him and shook hands. No hard feelings.

Quins, who started the day off in third place, struggled to make the man advantage count, though. Exeter dug in and showed great spirit, as they went 12-7 ahead with 15 minutes to play, after a Jack Innard try.

Right at the death, though, Andre Esterhuizen got over for Quins and Marcus Smith got the match-winning conversion over, via a thunk off the posts.


popular
Mario Balotelli, Luis Suarez, Fernando Torres and why Rio Ferdinand "hated them"
"I remember just hugging this Irish guy" - How one Kiwi rugby star reacted to Ireland's historic series win
"I don’t trust you" - Joey Barton delivers brutal dismissal of Irish defender
Down county football is in tatters, but Conor Laverty is the man to piece it back together
"I'll ask for everyone that comes to the game to wear purple and roots for us" - Pat Fitzgerald
Javier Hernandez offers to play for Manchester United for free
Former Manchester United director Michael Knighton reveals plan to buy the club from the Glazers
You may also like
2 days ago
"Everything’s done for you" - Eddie Jones on how private schools influence English rugby
4 days ago
Faf de Klerk knocked out after horror collision with knee of All Blacks winger Caleb Clarke
4 days ago
"We'll support him in any way we can" - Wallabies captain Michael Hooper backed for brave mental health decision
1 week ago
At a time when rugby needs genuine characters, Naitoa Ah Kuoi could not have timed it better
1 week ago
Eight Ireland players make final cut in 'World Class' 33-man squad selection
2 weeks ago
"There's no magic wand. A lot of it starts and finishes with hard work" - Ronan O'Gara
Next Page