Six months after it was announced he was signing for NEC Green Rockets, in Japan, and after umpteen pre-season games, Alex Goode finally made his Top League bow.

"It turns out it's the league for me," the Saracens and England star remarked, "as there is absolutely no defence! A 47-38 classic, but we lost. The ball being chucked around everywhere, playing in sunshine and crowds at the game. Nice weekend."

END_OF_DOCUMENT_TOKEN_TO_BE_REPLACED

Goode will return to Saracens next season, when they should be back in the Premiership, but he is embracing the culture shock. The only areas he is still looking to sort out are getting balls onto the pitch for the warm-ups, and pre-match meals.

"My experience of the first weekend," Goode told JOE UK's House of Rugby, "was quite different.

"I say Sunday League, as in it's quite professional at the game, but maybe I've been a bit pampered and spoiled at Saracens. When you arrive to the game, the (Saracens) kit-man has your kit, a spare gum-shield, all the balls lined up and there's everything ready for you. So all you have to take, in England, is your boots and your gum-shield, pretty much. Turn up in your tracksuit and off you go.

"Here, you've got to take your match socks, shorts, gum-shield, boots, your own strappings, your own Skins. You go on the Shinkansen - the bullet train - and you have to go in your full suit and tie - NEC pride - which is quite strange. You travel the day before, get to the hotel and change. On match-day, you can wear any t-shirt or top, as long as it has NEC on it." 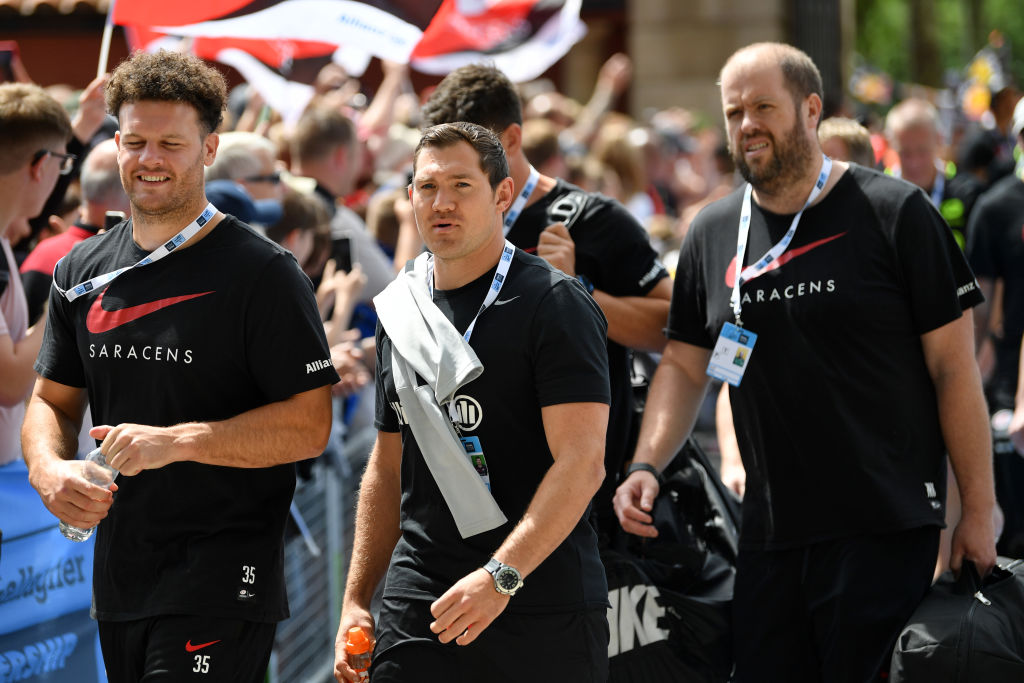 Alex Goode and his Saracens teammates arrive for the 2019 Premiership Final at Twickenham. (Photo by Dan Mullan/Getty Images)

"We stayed in this wonderful hotel, had a great dinner, good feed the night before," Goode continued.

"A great breakfast, and then it says 'Pre-Match' on the schedule, and it's down an hour after breakfast, and five hours before the match. I was thinking, 'That's a bit odd'.

"I go downstairs to see what the pre-match is about, and it was a bit of a shock. It was what I would describe as a very English pack-lunch - a white bread sandwich, a carton of orange juice and a banana.

"I went to my mate, 'Is this actually the pre-match?' I had to nip along and get some rice balls from the family mart, beforehand."

The packed lunch is a long way removed from what rugby professionals in Europe would be used to.

A few years back, the Irish rugby team's nutritionist, Nora Ní Fhlannagain, spoke about what the senior players would usually take on-board before a Test match:

"Two favourite options of the Irish team are spaghetti bolognese and chicken with sweet potatoes. Some players find it difficult to take on a big meal so they prefer to have a selection of small snacks, like porridge and pancakes. A pre-match meal should focus on healthy carbohydrates and you should eat it about three hours before kick-off."

Clearly, they do it differently in Japan.

Saying that, former Ireland lock Donncha O'Callaghan once told us about the unusual meal their kit-man Patrick 'Rala' O'Reilly arranged before one training session:

"Rala arrived in an ice cream van and it was just 99 ice-creams for everyone. It’s a small little thing but you get camp fever sometimes you know and just something to break it up and make you feel like a normal person."

Goode also spoke about how the NEC Green Rockets staff couldn't find any rugby balls before their season-opener.

"I went out to do some kicking, in my warm-up, and saw all these bands and medicine balls, but no rugby balls. 'What's going on here?' I asked the coach, and he got on his phone.

"Five minutes later and I had done a warm-up so was ready to kick balls. Three more coaches come out and I'm like, 'Guys, where are the rugby balls?' There's still none. They look at each other and are probably like, 'Who is this annoying Englishman?!'"

Just as Goode was thinking it was a case of Mike Bassett: England Manager, and he'd have to do some air-kicking, the balls arrived.

"Bring your own ball next time," Sean O'Brien joked.

These pampered European players don't know they've got it made.


popular
CCCC order replay of All-Ireland club football final
Shane Lowry confirms amicable split from caddie after four and a half year partnership
January transfer window 2023: Follow the latest updates live in our hub
Owen Farrell praises Johnny Sexton in revealing interview ahead of Six Nations
British publication urges Gareth Southgate to claim Evan Ferguson for England
"It's crazy to think Bundee Aki might come straight in and start against Wales"
Two Ireland stars included in Premier League's 'young English XI'
You may also like
4 days ago
Study shows rugby positions you are most/least likely to be injured playing
4 days ago
The two toughest calls in Ireland team to face Wales are in the backline
5 days ago
"He didn't give me that jersey back!" - Johnny Sexton on new rival Jack Crowley
1 week ago
Robbie Henshaw on his life-long friendship with Bundee Aki and Netflix documentaries
1 week ago
Munster get brutal Champions Cup draw as Leinster face Ulster in Last 16
1 week ago
“He's gonna be pi**ed when he hears this!” – Anthony Watson's Vegas trip with Tadhg Furlong
Next Page