That 'Rala' is some man.

'Rala' of course, was the baggage master to the Irish rugby team for over 20 years and he also had this role on two Lions tours.

However, his role wasn't simply just that of lugging gear around the place, numerous anecdotes from current and former Ireland internationals reveal that the man was an integral part of the Irish rugby climate. 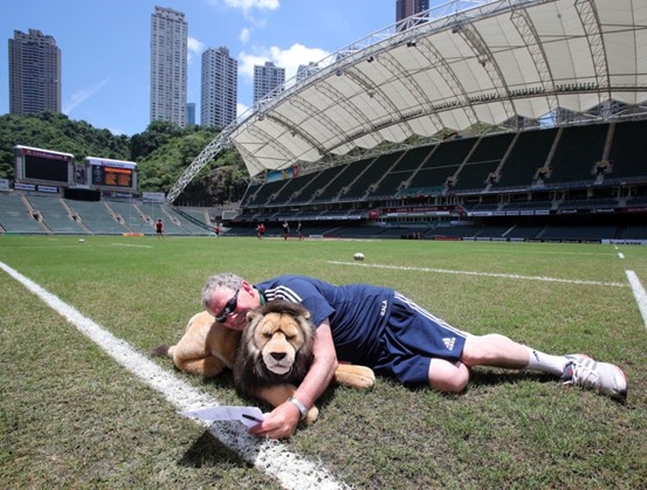 Often on the receiving end of pranks from the players, his personality and humour was a crucial respite from the pressure and monotony the Irish team would often experience in camp.

There are numerous, hilarious stories involving O'Reilly but none so more than one which Donncha O'Callaghan told us on The Hard Yards.

The panel were discussing the type of food which players eat in camp where Mike Ross made the point that the management do make an effort to mix things up a bit.

"You’d be surprised, sometimes they do pull the rabbit out of the hat there. They had a guy come along before the world cup who took meat and aged it for about two month’s I’d say."

Ross reveals that this particular butcher was from Northern Ireland and a good friend of Ireland captain Rory Best, also known as 'King of the North'.

"Yeah he’s a butcher up north, I can’t remember his name now but of course he’s one of Besty’s best friends. Because that fella knows everybody up there, King of the North!"

END_OF_DOCUMENT_TOKEN_TO_BE_REPLACED

O'Callaghan agrees with Ross with regards to how it is necessary for the management to introduce something different into camp every once in a while in order to keep the players from suffering cabin fever.

With this in mind, the Cork man reveals a hilarious story involving 'Rala', Ireland camp and an ice cream van.

"It’s a valid point isn’t  it Mike? When you’re in camp…just something that breaks it up, that seems like a bit of a treat…or you know, something that just seems a bit different like.

"Remember the time Rala arrived in an ice cream van and it was just 99’s for everyone and it’s a small little thing but you get camp fever sometimes you know and just something to break it up and make you feel like a normal person."

'Rala' finished his tenure of baggage master after the 2015 World Cup and we would imagine his presence is definitely missed around the place.

You can listen to more of this conversation in Episode 3 of The Hard Yards below and you can also subscribe to the podcast on iTunes here.


popular
Roy Keane story shows the power he had at Manchester United
McGregor admits shout from Dustin Poirier's corner got inside his head
McGregor's first words to Poirier after defeat show where the damage was done
Dustin Poirier annihilates Conor McGregor to earn stunning UFC 257 victory
Khabib Nurmagomedov reacts to Conor McGregor's shock UFC 257 loss
Jolie Poirier certainly let her voice be heard after her husband's win over McGregor
He'll be remembered as a footballer but Keith Higgins has always been a hurler
You may also like
22 hours ago
Two uncapped Munster players backed for Ireland's 2021 Guinness Six Nations squad
5 days ago
"That was the one game that I cried after" - Mike McCarthy
5 days ago
QUIZ: You'll need to be a massive Ireland fan to get all these one-cap wonders
1 week ago
Ireland's best uncapped prospects for the Guinness Six Nations
1 week ago
Darren Cave tells House of Rugby about one part of rugby he definitely doesn't miss
1 week ago
"He's ruptured his hamstring off the bone and he’s trying to get up into the defensive line"
Next Page