"They're a championship side, that's for sure."

James Lowe got a taster, once again, of the hard-core support from Leinster's travelling fans, last weekend. He is hopeful that the home crowd can replicate that sort of fervour to give Toulouse yet another warm welcome to Dublin.

The reigning European champions are jumping from the red-hot cauldron to the sea of blue, after turning over Munster in gripping fashion, last Saturday. Commentating on BT Sport, former Wales captain Sam Warburton proclaimed the heaving Aviva Stadium produced the best club rugby atmosphere he had ever been part of.

END_OF_DOCUMENT_TOKEN_TO_BE_REPLACED

Lowe was up for press duties, this week, and his focus was on Leinster upping their game from their nine-point victory over Leicester Tigers, and appealing to home fans to make it raucous at Lansdowne Road, this Saturday afternoon.

"They're the current champions, the double champions [Top 14 and European Cup], and they're a team that play a beautiful brand of rugby," he says. "But, on top of that, if we can get our own stuff right and limit their opportunities, we can go a long way."

Lowe notes how Toulouse 'knocked over Ulster' in Belfast and 'just pipped Munster' last Saturday, via that nerve-wracking place-kicking competition. He declares:

"Hopefully we can stop them in their tracks from beating up all the Irish boys." 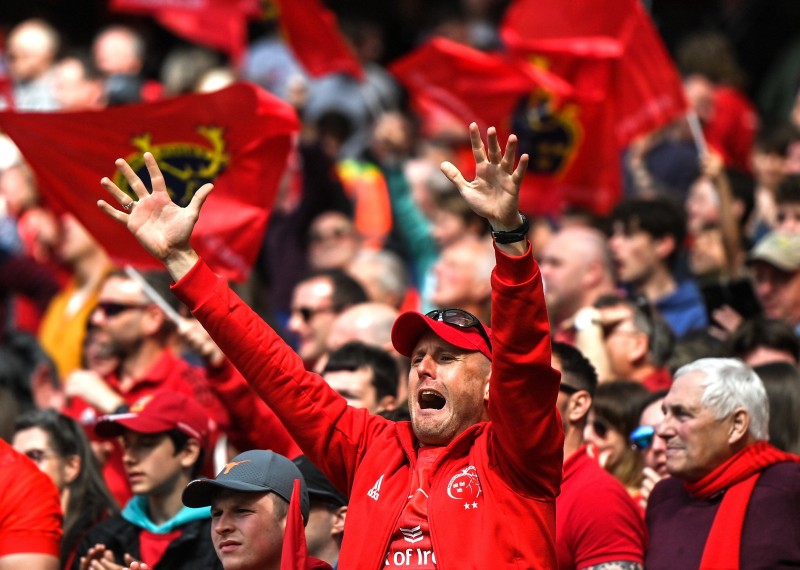 Munster supporters celebrate a try by Keith Earls during the Heineken Champions Cup Quarter-Final match between Munster and Toulouse at Aviva Stadium. (Photo by Ramsey Cardy/Sportsfile)

"Obviously," Lowe adds, "Toulouse have a lot of outstanding individuals that we have to keep on red alert for. But that's the name of the game. You're into knockout footy. It's amazing to be at home... hopefully we get a sold-out crowd, there's 25,000 already sold."

The winger was blown away by the travelling support, outside and inside Welford Road, last Saturday, and declares, "If we can get even half that sort of passion at the Aviva, on Saturday, it will go a long way."

"It's goosebumps, sort of thing. It's what makes the hairs on the back of your neck stand up. You see it at the Aviva, every now and then - hundreds of people standing as the bus shows up.

"Jeepers, we were in blimmin' Welford Road and it was the same about of people, and the same people as well! The ones that show up in the rain, snow or sunshine. It is amazing to have that support and to be able to repay them with a home semi-final."

END_OF_DOCUMENT_TOKEN_TO_BE_REPLACED

The Munster faithful well and truly delivered for their team, last weekend, and Sam Warburton was not the only one raving about the noise levels at the IRFU headquarters, and second home to Leinster. Following the game, Munster winger Simon Zebo effectively threw down the gauntlet to Leinster fans, after paying tribute to his own.

Never heard that stadium rock like that ONLY @Munsterrugby support capable of that
Best in the world
And not even close 🔴🔴 https://t.co/shzxWVWSTw

The ball is in the court of Leinster supporters now. The latest tally of tickets sold is north of 30,000 for the semi-final and we still have four days before Leinster and Toulouse face off.

"I think this is as big as it gets," says James Lowe. "They've got five stars on their chest and that's something we've been striving towards, for years. To win this title, we've got to beat the best. Fortunately, we've got the best at home.

"The ball is in our court. Our home fans will turn up in droves, I'm sure. Dublin will definitely turn it on. We know if we can turn in a clinical performance, we'll put our best foot forward."


popular
Roy Keane shows great comic timing after Jack Grealish party invite
Cutting through the contradictions from one of the worst television segments of the year
France the sore losers as Ireland Men reach first ever Sevens World Series final
Noel Gallagher left 'covered in blood' after headbutt from Ruben Dias’ dad
Kilkenny corner back does what every defender is supposed to do to win All-Ireland under-20
"I don't want to stick the knife in" - Are Leinster in Munster's heads?
Ralf Rangnick nicknamed 'specs' and subject to 'bully behaviour' at Man Utd
You may also like
2 days ago
United Rugby Championship quarter finals confirmed as Leinster beat Munster
2 days ago
Alex Kendellen takes exception to Harry Byrne reaction to lusty tackle
2 days ago
Two years after Leinster heartbreak, Cian Prendergast is Ireland's best young player
4 days ago
Josh van der Flier and Sam Monaghan win big at Irish rugby awards
6 days ago
James Lowe makes 'European Player' shortlist, at expense of Leinster teammate
6 days ago
Sean O'Brien could get to play England, at Twickenham, in his final game
Next Page