Jacob Stockdale on the four big dogs in Ireland's squad

No surprise, then, that all four were over in Monaco for the World Rugby awards.

Joe Schmidt opted to send over his emissaries, late last month, when World rugby was handing out awards for Team, Coach and Player of the Year. It was handy that he sent his top lieutenants over as there was plenty of silverware to accept and lug back to Ireland.

The following day, Schmidt announced he would be leaving Ireland after the 2019 World Cup and taking a break from coaching. Whether or not it will be a permanent break or not remains to be seen, but he will surely be sounded out by New Zealand late next year.

"Johnny wins World Player of the Year and he must have been thinking, 'This week, everyone is going to be talking about me'," joked Andrew Trimble, "and Joe went, 'See those headlines? Those are mine, mate!"

During the latest episode of Baz & Andrew's House of Rugby [from 20:00 below], Ulster and Ireland winger Jacob Stockdale spoke with Trimble about that Schmidt decision and the four 'tier one' players in the squad that probably heard the news before everyone else. 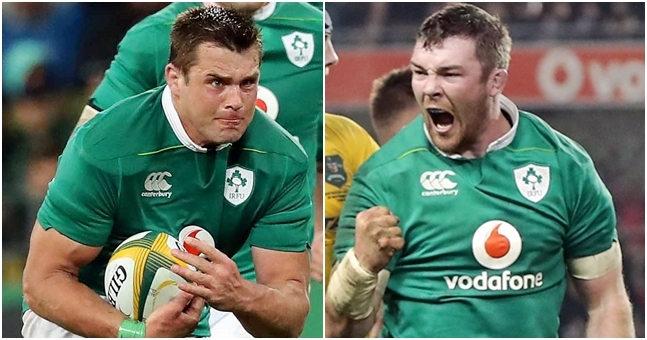 "We didn't really have an inkling, either way, on whether Joe was leaving or staying," said Stockdale.

"Joe kept that to... no, I'm sure Besty [Rory Best] and some of those had an idea... but us lower level lads, us peasants, we had no idea! But it is a decision he has made and it is a good place to leave it."

END_OF_DOCUMENT_TOKEN_TO_BE_REPLACED

Stockdale has faith in Ireland assistant coach Andy Farrell, who is taking over from Schmidt, and the existing culture of hard work within the squad in preventing Ireland 'crumbling to pieces' from 2020 and beyond.

Key in ensuring a smooth transition will be some of those senior players remaining on for a while after Schmidt goes. Rory Best is set to retire at the end of the 2019/20 season but the other senior trio will hope to play on, and feature prominently. On the four top dogs in the squad, Stockdale and Trimble had an interesting exchange:

ANDREW: “You talked about the tier one – the Rory Bests and the Sextons with Ireland. Am I right in saying it’s just those two or is there anyone else that would be…?

JACOB: “And CJ [Stander]. CJ would be up there too. Those few boys.”

ANDREW: “Yeah. They rule the roost, don’t they, them boys? They call the shots”

Three captains of their provinces and CJ Stander, who has captained both Munster and Ireland in the past.

No Rob Kearney, Keith Earls, Cian Healy or Devin Toner, but they are surely happy out doing their part and winning a rake of trophies.