Jacob Stockdale reveals how close he came to quitting rugby

At the beginning of this season, we had the pleasure of talking to Jacob Stockdale up at Ulster's Kingspan Stadium.

The 21-year-old had just come from a successful summer tour, with Ireland, to America and Japan. Joe Schmidt would have his Lions back but Stockdale, modest as he is, was up front about wanting to hold onto a back three spot.

One of the interesting points from our chat with Stockdale covered how his young body was coping with the physical demands of the senior game. In his first season out of Wallace High School, he admitted he over-compensated:

This was not the first time Stockdale struggled with getting his body right. It is a fine art, as most senior pros will admit, and everyone must find their own path. In a wide-ranging interview with Gavin Mairs, in the match programme for Ireland's game against England, Stockdale revealed how close he came to quitting the game amid fears he would be too small.

"Growing up through school, guys started overtaking me and by fourth year I was one of the smallest in my year," says Stockdale. "I was around 5-foot-5 and there was not much to me." 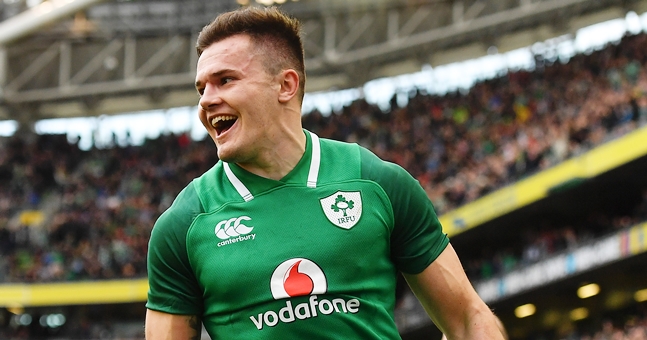 "At around the age of 14 or 15, I dropped out. I stopped going to training just because I was not enjoying it. I was subbing or in the 'B' team and didn't have any interest in it. By the fourth year I was one of the smallest guys in my year."

Stockdale says he can recall lining out in an U15 match against Portadown and thinking 'this is just not for me'. That feeling persisted as Stockdale moved into fifth form [U16s] and was only getting game-time with the third or fourth XVs.

END_OF_DOCUMENT_TOKEN_TO_BE_REPLACED

A growth spurt may have been long-awaited, for Stockdale, but when it arrived it made up for lost time. Heading into the lower sixth form, Stockdale was 5-foot-11. By the time he left school, he was 6-foot-3. "I played every game for the first XV that season and then was called up into the Ulster and Irish Schools side."

Really good interview with Jacob Stockdale, by @GavinMairs in the #ENGvIRE match programme
Talks about Ballynahinch, playing Irish Schools with Jordan Larmour and getting sage advice from ROG pic.twitter.com/ChbUxKY50m

There was no looking back from there on out. Stockdale played Irish Schools rugby with Jordan Larmour - 'a freak even back then' - and had two seasons of Ireland U20 rugby while also making strides with Ulster's senior side. Wherever he went, tries followed.

He made his Ireland debut against the United States in June 2017 and scored in the first half. There have been seven more caps and nine more tries.

The Ulster winger was far from finished as a teenager, he just needed the support of his teammates and his Wallace High School coach, Derek Suffern.