When Jacob Stockdale rounded Jayden Hayward in the 69th minute of Saturday's 56-19 mauling of Italy at the Aviva Stadium, it was the exclamation point of a dominant Irish win.

Ireland entered the second round of the Six Nations last weekend having scored 18 tries in their previous two contests against Italy, and although the Azzurri made Joe Schmidt's side work for 80 minutes at the 2015 Rugby World Cup, the Italians were coming to Dublin off the back of a 31-point, seven try hiding from England.

In other words, an Italian team that bleeds tries, at home, was a winger's dream.

END_OF_DOCUMENT_TOKEN_TO_BE_REPLACED

The relative strength of Italy will play a very minor role in the future of Stockdale's international rugby career over what should be the next decade, but on Saturday, the Ulster winger demonstrated against Conor O'Shea's side that he at least has the potential to be Ireland's greatest ever finisher. 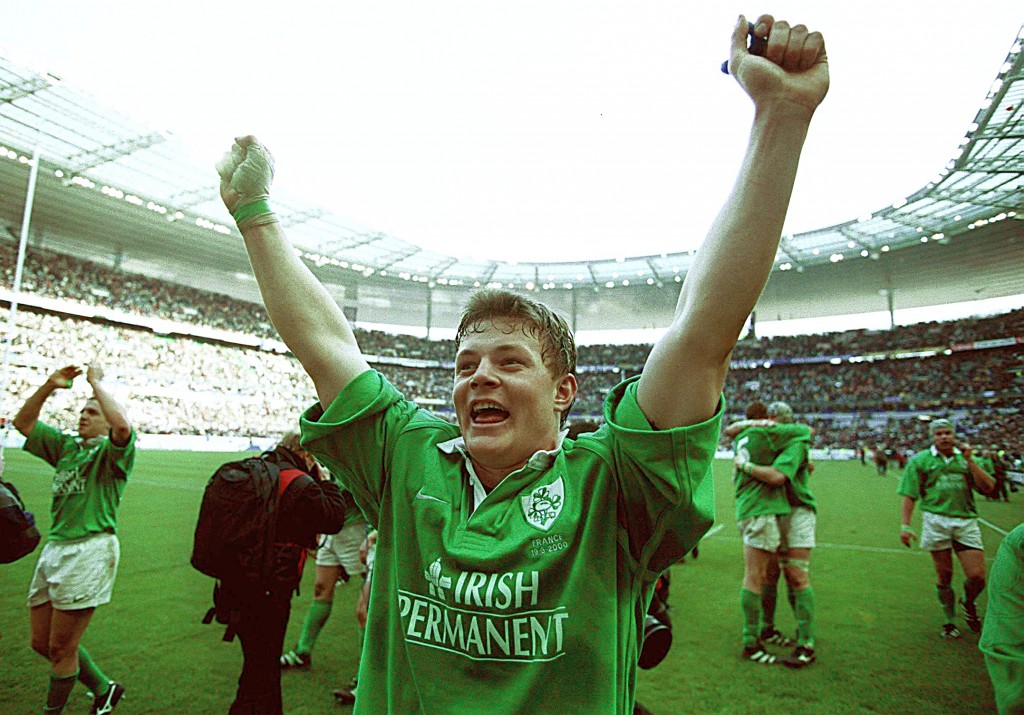 The all-time clubhouse leader in tries scored for Ireland is none other than Brian O'Driscoll, arguably the greatest player in the history of Irish rugby.

O'Driscoll's 46 tries in 133 games rank the highest among any player who has played international rugby for Ireland, however, Tommy Bowe (30 tries in 69 caps) and Denis Hickie (29 tries in 62 caps) both have better strike rates than the former Ireland captain.

What's interesting about all three players, the players that rank first, second and third respectively on the list of Ireland's all-time top try scorers, is that those players scored five tries through their first 18 combined games in international rugby.

Hickie scored two tries against Wales and Scotland in his first six games, Bowe touched down against Japan and the USA in his first half-dozen games in a green jersey, while O'Driscoll scored just one try in his first eight games.

The reason why Stockdale's try against Hayward is important is two-fold; firstly, it marked his sixth try from his first six tests; and secondly; it was the type of try that he scored; a one-handed intercept where he spun away from the defence, fended off the challenge of  Tommaso Benvenuti before sprinting down the sideline and throwing Hayward with a stutter step to score. 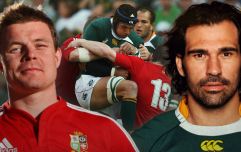 END_OF_DOCUMENT_TOKEN_TO_BE_REPLACED

It marked the Ulster flier's second try of the game, and while his first score was a tidy finish from a perfectly executed starter play, his second score was a fantastic individual effort where he showed the confidence of a player who backed himself to get to the line when he could have easily passed to a supporting Keith Earls.

Maybe that's selfish, maybe passing to Earls in that situation is the higher percentage option, but with five tries in his first five games, could you blame him for pinning the ears and backing himself?

The obvious question here is time, but it depends on which lens you view that question from.

The glass-half-empty approach is that half of his six tries have come against Italy and the USA, and if he never addresses his defensive issues he may not play enough games to come close to troubling Bowe, O'Driscoll or Hickie. 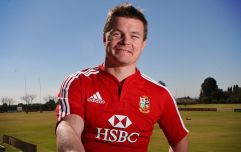 END_OF_DOCUMENT_TOKEN_TO_BE_REPLACED

Injuries could also yet play a massive part, as we saw with George North who scored nine tries in his first 12 games in international rugby before falling out of favour with the national team.

North has been lucky to stay in the game given the wrap sheet of injuries he's suffered over the first seven years of his career, while on an Irish front, a couple of injuries could have you appearing on a podcast or doing holiday shows with Vogue Williams. That's the brutal reality. Longevity is not kind to most wingers, compared to a position like second-row per se, where Paul O'Connell and Donnacha Ryan, were, and in Ryan's case, still is, playing at a ridiculously high level at 34.

Stockdale may also start to show signs of slowing down with Wales, Scotland and England all to play left in the Six Nations before a three-test tour to Australia this summer.

The glass-half-full approach is that he's made a more prolific start to his career than the current podium finishers, he's 21, he could still yet be nowhere near his prime and Ireland may finally have a player that could rank among the best finishers in the history of rugby.

While O'Driscoll's 47 international tries (including Lions series) rank eighth on the all-time list of international try scorers, Ireland have never had a player that has cracked the top 40 in terms of tries per cap. You would think that Ireland are due one given their current standing among World Rugby's elite nations.

Japan's Daisuke Ohata is the all-time leader in both tries scored and tries per cap, but with regards to players from Tier 1 nations in the top 40 in terms of tries per cap; New Zealand have nine players, England and Australia both have five players, and South Africa and Wales have three players each while France have two players. 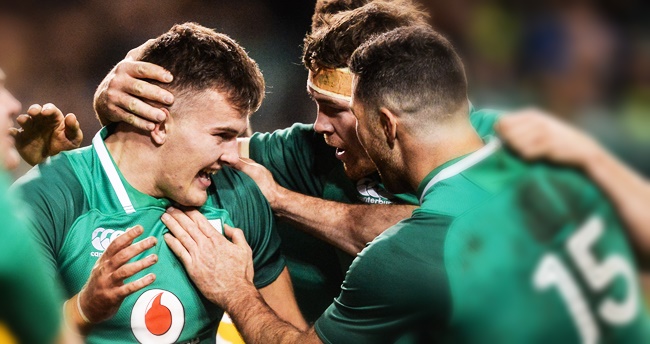 Given that Ireland currently sit third in the world and are producing a raft of very high quality young players, it's very conceivable to think that Stockdale could become the first player to buck this trend.

Although it's quite unlikely that he maintains his one try per game average, it could be likely that he breaks into the the top 40 of tries per cap.

However, for that to happen, he will need to address his defensive issues, if not for the least, have a  mostly clean run with injury.

Since the start of 2018, Stockdale has been caught out badly defensively against Leinster (three times in the one game) and France during Teddy Thomas' try from the opening weekend.

While he scored twice against Italy on Saturday, he was caught out on Tommaso Allan's try.

Admittedly, it was a three on one with Rob Kearney hovering in the backfield in support, but still, Stockdale hesitated and was beaten on his inside rather than moving to shutdown the ball carrier and force the pass.

Defending three-on-one situations is a low percentage gain on the vast majority of occasions, but given the distance from the line and the fact that Kearney was in support, you have got to force the pass and the attack towards the sideline than be beaten on your inside.

There are a number of examples that you can highlight where Stockdale should have performed better defensively, but at 21, there's a good chance he figures it out over the coming years.

Standing at 6'3 and 16 st, there should certainly should be no question about his physicality but lateral quickness may never be his strong point.

Scoring tries is, and he certainly looks every part of the most promising try scorer Ireland has ever had, if not least, the best they have had since Tommy Bowe.

Stockdale may have 180 metres left to run of a 200 metre race but he's made a great start out of the blocks, and for a nation that has been historically devoid of all-time outstanding finishers, six tries in six games should be enough to at least start to wonder.


popular
Red cards, slips, heroes, villains and last second equalisers - Derrygonnelly's extra time win over Dromore had it all
Divock Origi to the rescue after Diogo Jota's absolutely incredible miss
GAA club transfers that shocked the county: Jason Sherlock
Here's all the GAA games on the tube this weekend as the provincial championship heats up
Ruesha Littlejohn gate-crashes Katie McCabe's interview after another player-of-the-match display
Fermanagh footballer opens up about losing her mum to suicide and urges people to seek counselling
Jordan Larmour enjoys satisfying bit of revenge on Mack Hansen
You may also like
10 months ago
Jonathan Davies on Brian O'Driscoll's team bus gesture on Lions Tour
10 months ago
"Do we want more for our sons than we do our daughters? Nonsense" - Brian O'Driscoll
11 months ago
Brian O'Driscoll turns tables on South Africa after Ireland's World Cup draw
1 year ago
Brian O'Driscoll tells the story behind his most famous tackle
1 year ago
Josh van der Flier recalls first Leinster training session with Brian O'Driscoll
1 year ago
Nigel Owens on how the O'Driscoll and O'Connell captaincy dynamic worked
Next Page