At the end of this month, Andy Farrell will name his extended squad for what will be his third Six Nations as Ireland head coach. Jack Carty is set to be involved, but some feel he should start at least two of Ireland's championship fixtures.

The Connacht outhalf has put together another decent season and although he missed out on initial November internationals selection, he was called in for New Zealand preparation and got a full call-up for the Argentina game.

END_OF_DOCUMENT_TOKEN_TO_BE_REPLACED

His club form continued after the Test window and, with Joey Carbery breaking his elbow and Harry Byrne currently logged at 98 minutes for Leinster, this season, the case for Carty featuring prominently in the Six Nations grows stronger.

On the latest House of Rugby URC [LISTEN from 67:20 below], Darren Cave, Greg O'Shea and Jason Hennessy looked at Ireland's outhalf stocks and detailed why Farrell needs to settle the matter before we are left relying on Johnny Sexton again. 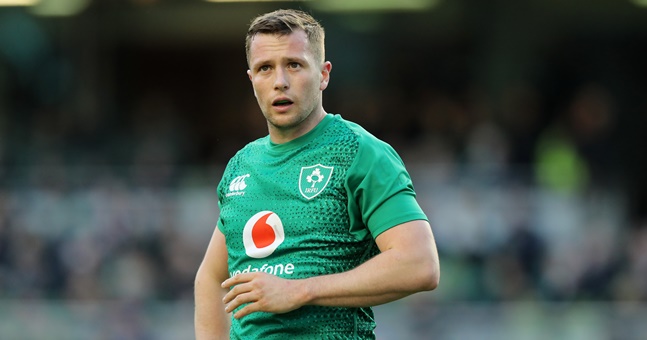 Jack Carty pictured in action for Ireland during the 2019 Six Nations. (Photo by David Rogers/Getty Images)

The case for Jack Carty and Ireland

Johnny Sexton is only signed up with Leinster and the IRFU until the end of the season but chances strongly are the 36-year-old will renew until the completion of the 2023 World Cup with his next deal.

END_OF_DOCUMENT_TOKEN_TO_BE_REPLACED

That would put him at 38 heading into what should be a World Cup quarter final against New Zealand or South Africa. Ireland's 2019 Plan A was Sexton but Plan B was a clearly struggling Carbery, who missed a large chunk of the next two seasons after heading to Japan with wrist and ankle injuries.

Carty was Ireland third outhalf in Japan but, unfairly, shouldered a lot of the blame for the pool stage defeat to Japan and fell out of favour with Joe Schmidt.

"I think the interesting thing for 2022 is, who puts their hand up and who gets backed at 10?" Darren Cave began.

"Johnny Sexton is going to be Ireland's best fly-half at the [2023] World Cup, in my opinion. I would like to see him not play a lot of games for Ireland in 2022. For me, that is the glaring chink in the armour.

"For whatever reason, you can see that Andy Farrell prefers Harry Byrne, while Leo Cullen prefers Ross Byrne. Billy Burns seems to have slipped away from that conversation."

When it was suggested by Hennessy that Carty could be the perfect man to deputise for Sexton, and start some more Tests in 2022, Cave was all for it.

The former Ulster and Ireland centre could not see Munster's Ben Healy jumping the queue. "The World Cup is coming," he added. "We're on the countdown now.

"And if we get to the quarter final and Johnny Sexton is not playing, we're in trouble. We don't know the answer to that question.

"I would always be pro-Carbery, but he has got to the stage where he hasn't played his best rugby in two and a half years... I think the door is ajar for Jack Carty, and that's the one to watch."

END_OF_DOCUMENT_TOKEN_TO_BE_REPLACED

"For consistency and level-headedness," said O'Shea, "I think Carty should be in there backing up Sexton for the World Cup. Stop messing around with the other guys. Jack Carty is going to do the job for you."

During the show, Hennessy said Ireland's back row must be built around Caelan Doris and Jack Conan, for the Six Nations and beyond. "One at six, the other at eight, and go from there," he said.

"I'd start that way too," Cave agreed. "Six, eight and then figure out who should be seven."


popular
Six GAA games shown on TV this weekend that you do not want to miss
Andy Moran reveals which former Mayo teammate was the ultimate team player
Paul Galvin is not one bit impressed with the new Kerry jersey
"It’s hard not to respect Johnny, even if you don’t like him!" - Dan Biggar
QUIZ: Which is the correct GAA crest?
"I was in the Blackrock end goal looking up to the heavens saying, "Get us through it" - Kerins following his late father's footsteps
Craig Dias on club All-Ireland run, winning Leinster, and making his second debut for Dublin a decade after his first
You may also like
3 days ago
"I have to come into this camp and do what I can to get the No.2 jersey" - Rob Herring
3 days ago
"It's not a stepping stone any more" - Connacht pride in Test-ready stars
4 days ago
"I had a point to prove" - Conor Oliver on choosing Connacht over Leicester Tigers
1 week ago
"I saw a skinny boy from Ireland, standing in a big goal" - Jurgen Klopp praises Caoimhín Kelleher's development as a goalkeeper
1 week ago
Predicting Ireland's starting XV for Wales after Andy Farrell squad announcement
1 week ago
Jamie Heaslip delivers Jack Carty reality check, hours before Ireland call-up
Next Page