The Right Zebo has a nice ring to it

Veteran broadcaster George Hook set his retirement stall out early last year when he announced he would be calling it quits from TV punditry after the Rugby World Cup and his radio show in September 2016.

Simon Zebo was in typically fun-stoking mood at University of Limerick today as he took over the radio and online interviews with Munster teammate Dave O'Callaghan.

Perhaps Zebo is getting some work experience in before he makes a play for the hot-seat. The winger, after all, is fond of spinning records down in his native Cork city whenever he gets the chance. 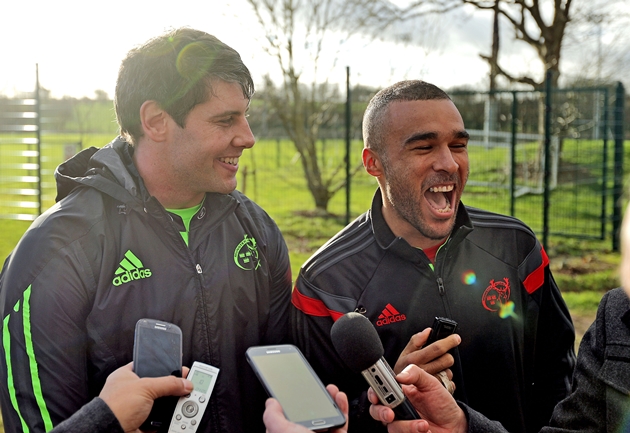 END_OF_DOCUMENT_TOKEN_TO_BE_REPLACED

There was good news on the injury front for Munster, meanwhile, as winger Keith Earls took a full part in training today. He is expected to miss this weekend's league match away to Zebre but Anthony Foley expects to have him in contention for a place in his Champions Cup squad to take on Saracens.

Up at Kingspan Ravenhill today, Ulster centre Darren Cave admitted his side need a strong away performance to beat Benetton Treviso this weekend. 'You need to look at some of the negatives to improve them. One thing we have looked at is, when we are in control of a game we have to take advantage of that,' Cave told UTV Radio.


popular
Get him a tuxedo, give him the All-Star and for crying out loud, someone bring that man out to America
Fans react to Tottenham Hotspur's 'brilliant tease' for Richarlison signing
Tiernan Kelly and three other players hit with ban following tunnel brawl
Southampton pay tribute as Shane Long leaves the club after eight years
Quiz: Name the players these famous footballers played alongside the most times
QUIZ: How well do you know Manchester United players of the 2000s?
The race to be the championship's top scorer this season is unbelievably close
You may also like
5 days ago
Shane McGuigan does a 'Sueey' Cristiano Ronaldo would be proud of after winning MOTM
1 week ago
“Mayo will be waiting in the long grass" - Oisin McConville believes Kerry are 'under-prepared'
2 weeks ago
Limerick's Gearóid Hegarty jokes that the lads were 'disgusted' about their physiques being shared over social media
1 month ago
James O'Donoghue goes full Roy Keane with Cork 'gloves' dig
1 month ago
Roy Keane watches on as Cork run out of steam against superior Kerry side
1 month ago
Both Cork and Kerry receive boost as injured players return to the starting line-up
Next Page