A remarkable act of courage and giving.

Steve Prescott lived a full life during his 39 years on earth.

The St Helen's native had a successful rugby league career, appeared in a World Cup with Ireland, bravely battled cancer for seven years and set up a charitable foundation that raised over £500,000 for cancer research and support by the time of his death, in 2013. 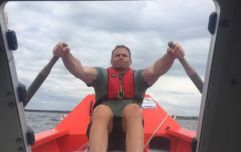 END_OF_DOCUMENT_TOKEN_TO_BE_REPLACED

Having played for St Helens, Hull FC and Wakefield, as well as both England and Ireland [at the 2000 World Cup], Prescott's career was ended by injury in 2004. Two years later he was diagnosed with cancer [pseudomyxoma peritonei].

He battled it until his passing, in November 2013, but also found time to dedicate himself to fundraising and raising awareness of the disease.

After his passing, the RFL's 'Man of Steel' accolade for the league's hardiest player was renamed the 'Steve Prescott Man of Steel' award.

In a touching interview with the BBC, Steve's widow, Linzi, reveals that her husband underwent 32 hours of surgery, which included five separate transplants, just three weeks before he died.

She commented: 'After diagnosis Steve changed as a person and it moulded the person he became. He turned his sights to helping other people