There has been no official confirmation just yet but, as he departed on a stretcher, the Ireland centre raised his thumb to the crowd to signify he was at least awake and aware of where he was after a crunching hit from Sam Cane inside the first 10 minutes at the Aviva.

Garry Ringrose is on for the unfortunate Robbie Henshaw, who raises his thumb to show he is okay pic.twitter.com/yw4KqHF7sc 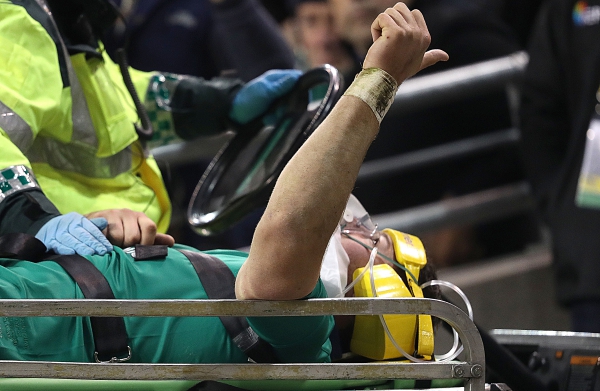 It was one of those tackles that was hard to call, even with the benefit of several replays.

Cane's shoulder clearly collided with Henshaw's jaw, but the initial contact may well have been below the Leinster man's shoulder, though even that was in dispute and replay after replay failed to definitively clear that up.

@WorldRugby arms came up after hit. Pyper should have asked for better angles and made call himself... pic.twitter.com/mxDWqe1mDB

At the same time referee Jaco Peyper, after consultation with his TMO, awarded a penalty to Ireland so a boundary must have been crossed. Why else was Cane penalised?

But this boundary was not crossed far enough, it would seem, to show the All Black a red card or even send him to the sin bin.

It was a decision that infuriated many Ireland fans on Twitter.

World Rugby inconsistencies once again. A yellow card at the very least for Sam Cane and Jaco Peper questions if it's even a penalty?

Eh? Given the cards we've seen regularly this season for high shots, Sam Cane gets nothing for that

Sam Cane needs to get some for that #IrlVNZ

I don't get how that's not at least a sin bin for Sam Cane. His shoulders gone into Henshaw's temple!! Ref has bottled it there!! #IREvNZL


popular
Sean Dyche set to be named Everton manager after Marcelo Bielsa talks break down
Roy Keane flatly rejects longstanding perception of ex-Man United midfielder Paul Ince
Allianz National Football League Round 1: All the action and talking points
Roy Keane leaves ITV pundits in stitches after Pep Guardiola's pre-match interview
Conor McGregor hit by car ‘at full speed’ while cycling
The two toughest calls in Ireland team to face Wales are in the backline
Quiz: Identify these 15 football clubs that are not named after a place
You may also like
5 days ago
Liverpool reportedly selling Caoimhin Kelleher for Jude Bellingham funds
5 days ago
Robbie Henshaw on his life-long friendship with Bundee Aki and Netflix documentaries
1 week ago
Evan Ferguson sends Soccer Saturday panel bananas with late equaliser
1 week ago
Eamon Dunphy blames Roy Keane's behaviour for Declan Rice choosing England
1 week ago
Can you name the Republic of Ireland Premier League player from their wikipedia?
1 week ago
Kieran Treadwell the most unfortunate Ireland player to miss Six Nations call
Next Page