For long stretches of the first half, the Irish fans were lacking voice and belief. For the second week running, it took CJ Stander and a couple of other Munster men to change that story.

Last Saturday, we watched on in a state of incredulity as TV replays showed Stuart Hogg dropping a dolly and having his try chalked off. This afternoon, it was the turn of Hadleigh Parkes to curse his luck as the ball deserted his grasp at the last moment.

END_OF_DOCUMENT_TOKEN_TO_BE_REPLACED

Last March, in Cardiff, Ireland meekly surrendered to Wales to all but wrap a bow on their Grand Slam. By full-time in Dublin, 11 months on, the Slam is only on the Irish agenda.

Stander was immense for the second week running and now has five turnovers in two games. The Munster back-row spoke, before the game, about some horrible abuse himself and his family had received in the past year. His actions on the field today spoke just as loud as his proud comments about representing his adopted country.

With Metallica's 'Enter Sandman' again setting the scene, it was Ireland that charged from the traps. Having failed to get Jacob Stockdale into the game enough against the Scots, last weekend, Ireland got the ball into his mitts early doors and chaos ensued for the Welsh.

His chip ahead was chased down with intent and Josh van der Flier won his side an attacking scrum when he thundered Dan Biggar back over his line. It felt like a statement but Wales responded with one of their own to win a scrum penalty.

That set the early tone as Ireland pressed forward but were undone by conceding penalties. In return, referee Romain Poite was giving little back. At one stage, wedged into a ruck, CJ Stander politely asked Poite to check a Justin Tipuric knock-on, but to little avail.

Henderson and Murray conceded turnovers before Bundee Aki got the home crowd warmed up with a steal inside his 22. Ireland advanced up-field and Stander won a turnover inside the Wales 22 and Sexton opted to kick for an attacking lineout. That was cleanly claimed but Poite awarded a penalty to the visitors just as the Irish rolling maul looked set to score. 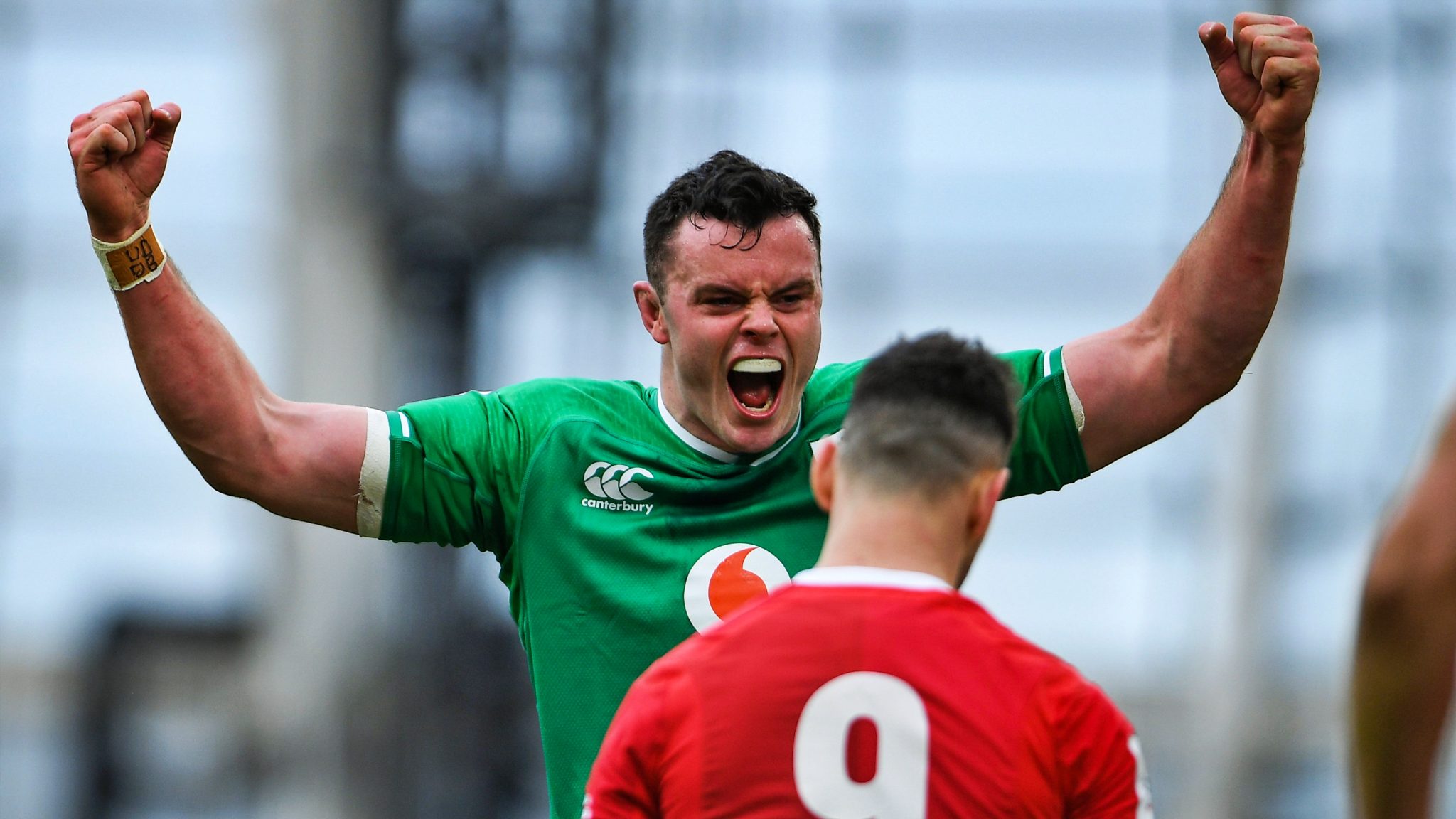 END_OF_DOCUMENT_TOKEN_TO_BE_REPLACED

Ireland won possession back, soon after, and James Ryan showed great awareness at the breakdown to drag the ball back into the ruck. Ireland went through four more phases before they went wide right. Jordan Larmour had no right to score - faced with four Welsh defenders - but score he did.

Sexton missed the conversion badly and copped an earful from winger Josh Adams. Karma (and a calf injury) then ended Adams' game but not before Stander had won his second turnover at the breakdown.

All was looking good but there was a fear - expressed in passages of awkward silence from the stands - that Ireland were not as far ahead as their possession, territory and chances suggested they should be. That fear was realised when Alun Wyn Jones then Biggar got away smart passes to put Tomos Williams away for a try.

Sexton was livid with the decision and, when he wasn't pushing and shoving Biggar, was imploring Poite to get TMO checks on both passes. Poite got the all clear from the TMO, Biggar converted and Wales went 7-5 ahead after 26 minutes, and their first real attack of the game.

Ireland responded well to that set-back and were aided by Williams shelling the ball just in front of his tryline. Ireland had a penalty coming after their scrum forced the issue. The Irish forwards backed themselves and Tadhg Furlong boshed over the line with Pete O'Mahony and Stander latching on to devastating effect.

The half ended with a gem of an Andrew Conway kick up the line, Conor Murray exasperated with scrum re-sets and O'Mahony getting into it with Jones as both sides headed to the tunnel. HALF-TIME: Ireland 12-7 Wales 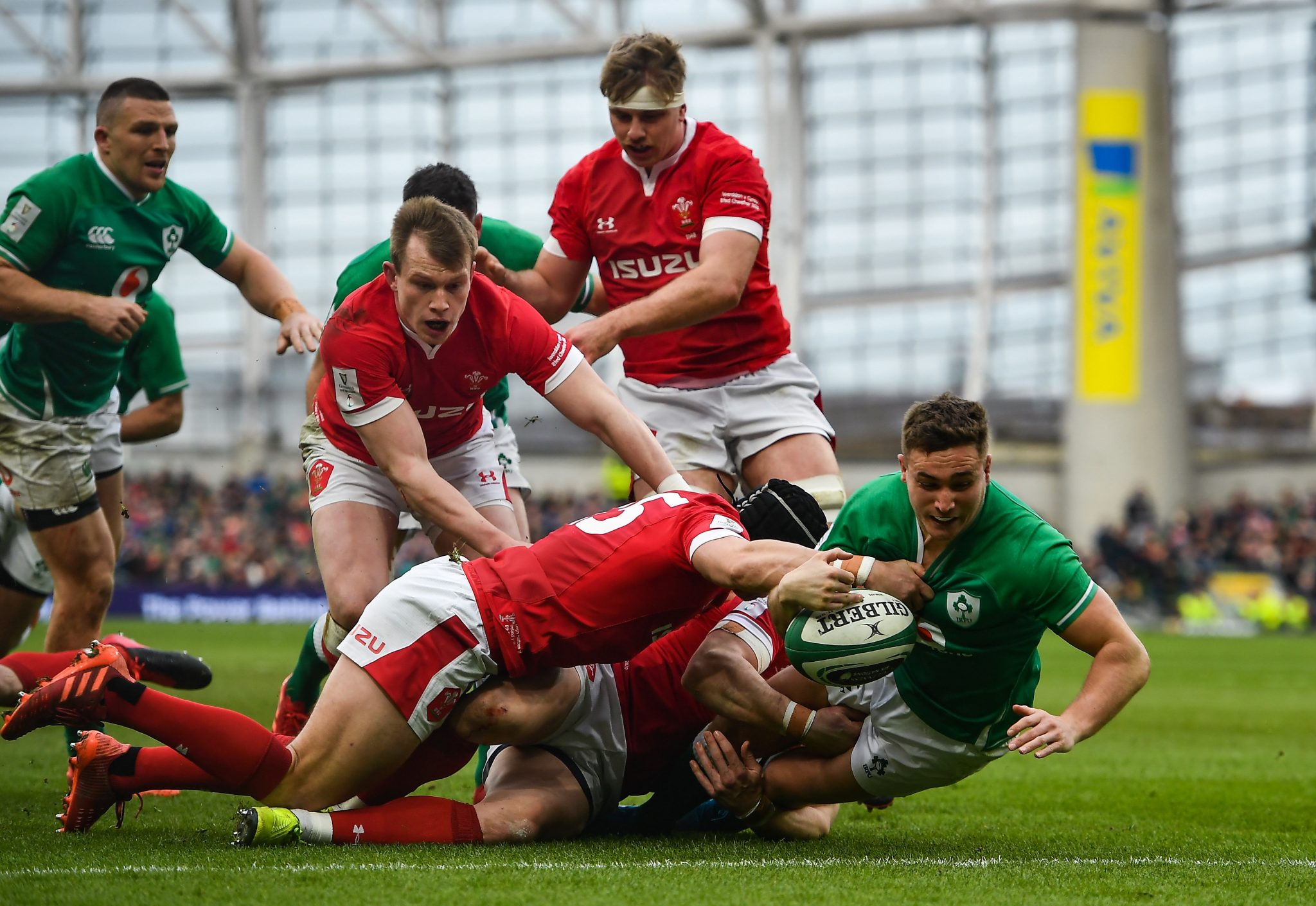 END_OF_DOCUMENT_TOKEN_TO_BE_REPLACED

The second half saw Ireland lose Robbie Henshaw, one of their best players from the opening 40, but stay on top thanks to an O'Mahony lineout steal and a third Stander turnover.

Wales went offside on multiple occasions and Sexton was rewarded for going for the attacking lineout when van der Flier got the finishing touch to a brutally effective rolling maul. Sexton was over his early kicking jitters and landed a beauty from the left-hand touchline.

30 minutes to go and one try away from a bonus point, but the next 15 minutes was all Wales as Jones and his teammates surged forwards to get back into the contest. Hadleigh Parkes looked to have done just that but, for the second week running, Ireland benefitted from a back spilling the ball forward at the last moment. The TMO said 'No try' and the home crowd erupted, but on Wales came.

Stander was unfortunate not to get his fourth and fifth turnovers as he continued to pile into the breakdown to torment the Welsh. Poite penalised him for going off his feet and then he was pinged again for what looked to be a genuine jackal steal near his tryline. The Aviva Stadium went ballistic when, after more re-sets, Ireland won a crucial scrum against the head and in the shadow of their own posts.

A rolling maul that took the Welsh for a stroll up beyond halfway and a blistering attack up the left flank plonked Wales in trouble down inside their 22. They never escaped - harangued by the Irish - until the excellent Conway scored the bonus point try in the corner.

Wales got a late consolation through Justin Tipuric but the day belonged to Ireland and the Grand Slam is very much on.

OUR MAN OF THE MATCH: CJ Stander (Ireland)


popular
WATCH: Paul O'Connell proves for the umpteenth time that he's not like us mere mortals
Kieran Donaghy set to break 30-year-old club record this weekend
"He's one of the best athletes, if not THE best athlete I've seen in the last while"
Shane Walsh: 'That's not how I was coached to play football. No one was coached to play football that way'
Sean O'Brien shares some of the worst player forfeits from his Leinster days
Study shows GAA players more prone to binge drinking than their peers
Danny Mills forgets he's on air as he calls Man Utd 's***' on Sky Sports
You may also like
1 week ago
"Where Johnny Sexton is so important to us now is being able to pass the baton"
1 week ago
"I'd love to finish on home soil but I can't see it. I won't be playing in the next Six Nations"
1 week ago
Ireland star Will Connors on his rude awakening playing GAA in KIldare
1 week ago
Andy Farrell's Ireland squad for November internationals to feature some exciting talents
1 week ago
Picking Ireland's best back row as multiple candidates hit early form
1 week ago
Caoimhín Kelleher could carve out a career at Liverpool
Next Page