Seeking a bonus point win, Ireland took on Samoa for a place in the quarters.

Both teams were playing their last pool-stage game with Ireland needing a win and try-scoring bonus point to secure a place in the quarter finals. Samoa meanwhile, had come off a loss to hosts Japan and all they could hope for was to bow out with a proud performance against the Irish.

Samoa laid down the challenge with their ceremonial Siva Tau before the game kicked off.

END_OF_DOCUMENT_TOKEN_TO_BE_REPLACED

Ireland knew what was required of them and they started in due manner as just three minutes in, captain Rory Best touched down following a rolling maul to add five points to the board. Johnny Sexton added the conversion.

Jordan Larmour set a tournament record by beating 12 defenders on his 17 carries, which gained his side 65 metres and led to two tries.

Six minutes in and Seilala Lam was sin-binned for a dangerous tackle on Jacob Stockdale, leaving Samoa with 14 men for the next 10 minutes.

Nine minutes in and Ireland got the second of the four tries they needed after Tadhg Furlong muscled through the Samoan defence to get the ball over. Sexton added the conversion for a score of 14-0. 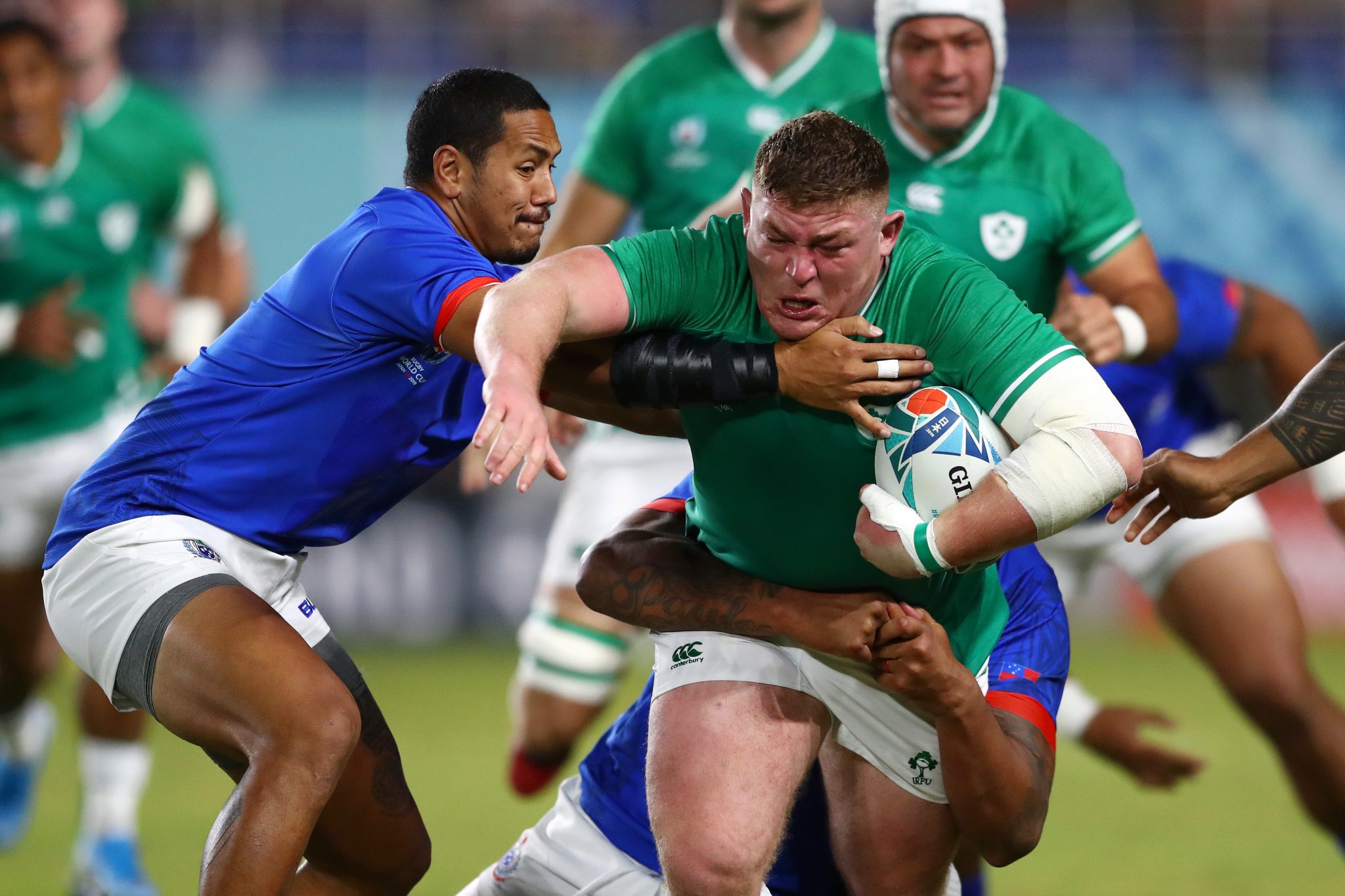 END_OF_DOCUMENT_TOKEN_TO_BE_REPLACED

Ireland looked to be in cruise control with Samoa offering little to suggest otherwise and in the 21st minute, things got better for the Irish. Sexton and Jordan Larmour worked a brilliant one-two to evade the defence before Sexton touched down for try number three. The conversion was added for a score of 21-0.

25 minutes in though and Ireland entered turbulent waters – the Pacific Islanders moved through the phases before Jack Lam wrestled past the line to score. The resulting conversion was missed.

Three minutes later, however, Ireland were dealt another heavy blow after Bundee Aki was sent off for an unlawful tackle on Ulupano Seuteni's head. The ref deemed that there wasn't any mitigation and was left with no choice but to show red.

Despite the man disadvantage, Ireland landed their bonus point with their fourth try just seconds before halftime – Sexton was the man responsible as he crossed over from five metres out to score. The conversion was missed as the halftime scoreline read 26-5.

Ireland had begun the first half well and at one point looked like they could run away with the game before Samoa's try and Aki's red card frustrated their efforts.

The second half kicked off and Ireland had to work to secure the win.

Eight minutes into the second half and Conor Murray zipped a peach of a pass to Larmour out right before the full-back crossed over to score. Sexton converted for a score of 33-5.

As the minutes ticked by, Ireland kept growing in attack and hammering the door but the Samoan defence remained resolute despite their poor discipline on occasion.

59 minutes in and both sides were left with 14 men on the field after Samoa's TJ Ioane was sin-binned.

68 minutes in and Ireland established a firm lead with another try courtesy of CJ Stander – the Irish were rewarded for their consistent pressure this half as Stander carried over the ball from the ruck. Joey Carbery grabbed the conversion for a score of 40-5.

No fewer than 12 defenders beaten ☄️

Larmour is pure electric when he's at his best 🔥 pic.twitter.com/Sjy85tp9nA

If anything, Ireland seemed to be playing with a man advantage as their dominance in the second half gave no hint of their prior red card. Then, 70 minutes in, try number seven arrived – Carbery swept a slick grubber for Conway to chase who grounded it over the line. With the added conversion, the score read 47-5 to Ireland.

And so it finished at Fukuoka with Ireland putting up a professional and commanding performance and earning a place in the quarterfinals in the process. Their position in the group and their quarter final opponents all hang upon the decision regarding Scotland v Japan on Sunday. If Ireland finish top of the group, they face Rassie Erasmus's South Africa whereas New Zealand await them if they were to be placed second.

"After the Japan game, we knew 10 points would get us through and we have got that. The boys rolled up their sleeves and we knew how good Samoa are, but we stood up. It maybe wasn't that pretty but we were very effective."


popular
The four stone-cold certainties for All-Stars even as early as this
Andy Farrell goes for Munster veterans as Ireland team to face New Zealand named
Eamon McGee just couldn't help himself with Armagh-melee tweet
"He's actually smiling putting the ball over the bar. He should nearly be fainting." - Ryall on Limerick's legacy
"The economy was one of the big reasons" - Cadogan's move from an electrician to personal training
Kylian Mbappe reportedly wants PSG to sell Neymar
Gavin Coombes one of four Irish players to push themselves into Test picture

You may also like
19 hours ago
Gavin Coombes one of four Irish players to push themselves into Test picture
21 hours ago
Bundee Aki understandably emotional, as Ireland pay moving tribute to late Sean Wainui
22 hours ago
Full Ireland player ratings after Maori All Blacks teach us an early lesson
1 day ago
"We could lose all five games" - Darren Cave with a rare take on Ireland's chances
1 day ago
Mike Lowry and Peter O'Mahony in First Test contention as Ireland shuffle deck
2 days ago
"Significant" knee injury ends Iain Henderson's tour of New Zealand
Next Page