The big game was here. The one we were all waiting for.

Ireland faced off against the mighty All-Blacks in Tokyo for a shot at the semifinals. Only one could go through and Ireland in six prior attempts, had never managed to get into the final four. New Zealand meanwhile, had only failed to get past the quarters once in eight attempts. Unfortunately for the Irish, today would be no different.

38% - Following the conclusion of the pool stages our @OptaPro modelling suggests the @AllBlacks have a 38% chance of winning #RWC2019, dropping from 43% now that they have to face @IrishRugby in the quarter-finals. Pathway. pic.twitter.com/vBnle8YWgX

END_OF_DOCUMENT_TOKEN_TO_BE_REPLACED

Coming into the tournament, Ireland were the best ranked side in the world but lost their crown to their opponents today. Additionally, the Men in Green have triumphed in two of the last three meetings against New Zealand. Notwithstanding their last two losses, New Zealand have won 28 out of 31 Test matches against Ireland. Additionally, they've won their last 17 RWC games in a row– a record.

The winner of this tie would face off against England who qualified earlier on Saturday in the semis.

Just before kickoff, New Zealand performed their ceremonial haka which was drowned out by a deafening rendition of the Fields of the Athenry by the thousands of spectating Irish fans, doing everything possible to will their team into the last four.

END_OF_DOCUMENT_TOKEN_TO_BE_REPLACED

The game kicked off.

Just five minutes into the match, Garry Ringrose took a blow to his head and had to come off for treatment as Jordan Larmour came on in his stead.

A minute later and New Zealand landed their first points of the match after being awarded a penalty. Richie Mo'unga whacked the ball through the middle for three early points.

10 minutes in and Ringrose rejoined the game after being stitched up.

21 - Beauden Barrett made 21 carries in #NZLvIRE, the most ever by an @AllBlacks player in a @rugbyworldcup match, surpassing the previous best tally set by John Kirwan and Buck Shelford who both made 20 against Italy in 1987. Key.#RWC2019 pic.twitter.com/S2frj6ZYKM

13 minutes into the game and the first try arrived...for the All Blacks. New Zealand's relentless pressure finally burst the Irish dam as Aaron Smith slunk through a gap to touch down. Mo'unga  grabbed the extras for a score of 10-0.

20 minutes in and NZ grabbed their second try of the game after Smith capitalised again in a ruthless Kiwi display. Mo'unga added the two points from the conversion.

Ireland weren't playing badly, this was just an indication of the gulf in class between the two sides with New Zealand dominating every facet of the game so far. The All Blacks were swelling into a massive tidal wave on the pitch with the Irish drowning in it – their ferocity in tackling and rucks and their speed in recycling the ball was magnificent to behold.

29 minutes into the game and Ireland could barely get out of their own half with the All Blacks having 62% of the possession.

31 minutes into the game and NZ grabbed their third try courtesy of Beauden Barrett – Mo'unga jabbed a grubber forward which Barrett pounced on across the line for a score of 22-0. 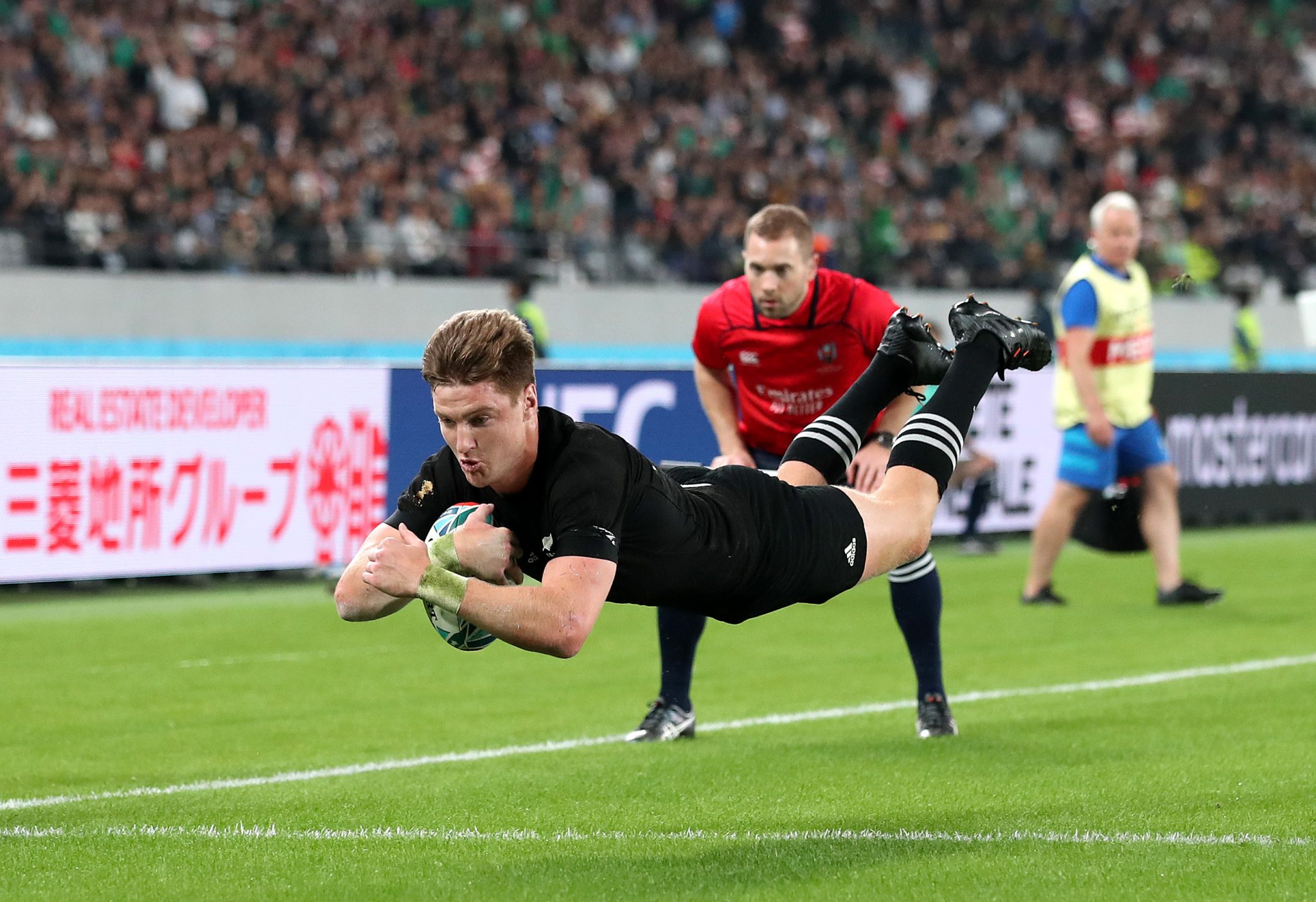 36 minutes in and things didn't get any better for the Irish and their error strewn play certainly didn't help matters. New Zealand had no trouble mopping up Irish attacks.

Halftime arrived, bringing an end to the carnage.

22 - The @AllBlacks' 22-point lead is the biggest by any side at halftime in a @rugbyworldcup knockout match since 2003, when France led 27-0 at the break against Ireland in their quarter-final clash. Clinical.#RWC2019 #NZLvIRE pic.twitter.com/NU7ontDCcl

The second half kicked off.

Five minutes in and Ireland had missed 12 tackles compared to New Zealand's one. As good as New Zealand had been so far, there was a sense that the Irish just hadn't turned up for this encounter.

47 minutes into the game, Kieran Read flicked a deft offload for Codie Taylor who touched down for the fourth try of the game. Mo'unga converted for a score of 29-0.

60 minutes in and NZ compiled further misery on their opponents as the fifth try arrived. Mo'unga smacked a brilliant cross field kick to find Sevu Reece who found Matt Todd to score. Too easy, far too easy for the team in black. And there was still 20 minutes left to play.

62 minutes in and Captain Rory Best came off to a standing ovation, having represented his country for the last time.

Gutted for Rory, such a tough way to end but what a career he has had! A true great Irish player and captain!

It was now a question of grabbing a consolation and fighting for their pride as the NZ looked certain to head for the semis.

69 minutes in and Ireland responded brilliantly – Robbie Henshaw slipped past his marker to score Ireland's first try. Joey Carbery converted for a score of 34-7.

72 minutes into the encounter and the All Blacks kept up the pressure as George Bridge touched down following a lovely offload from Dane Coles, dampening the new found Irish delight.

Four minutes later, Ireland finished on the high as they built through the phases before CJ Stander was found to have been illegally blocked by Todd. The Irish were awarded a penalty try and Todd was sin-binned for his efforts.

Then with minutes left in the game, the final try arrived courtesy of the reigning champs – Jordie Barrett was teed up by his brother Beauden in acres of space, before touching down for an easy try.

And so it finished with a final scoreline of 46-14 in Tokyo. 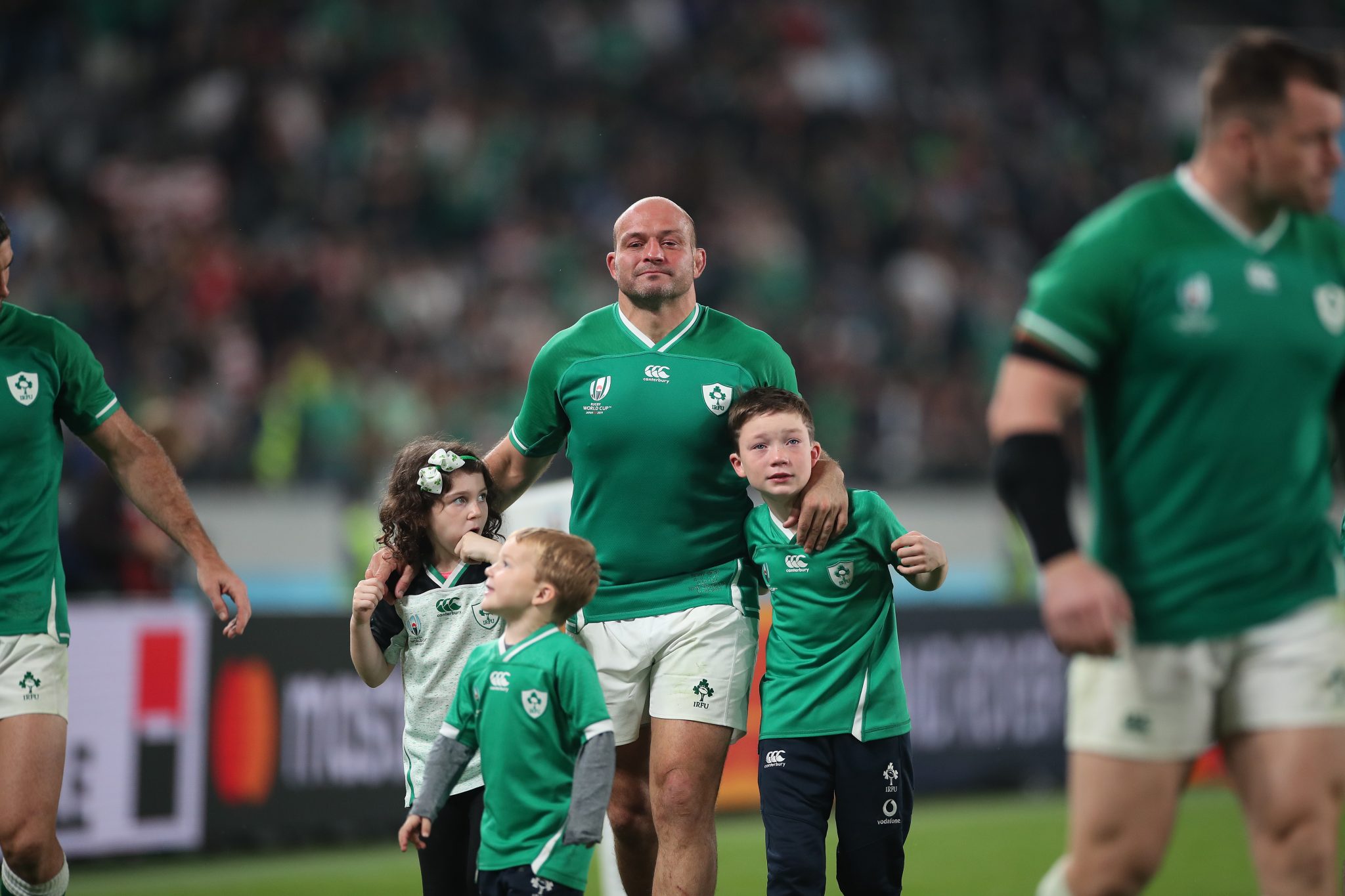 It was an absolute masterclass from the Kiwis, denying the Irish a semifinal berth in their seventh attempt.

"The All Blacks were fantastic. We felt we had prepared well and had a game plan - they just came out of the blocks hard and never let us get off that again."

"They were just really clinical, didn't let us get on the front foot. This is a momentum game, especially in knockout rugby. The boys will look back at this but you have to give enormous credit to the All Blacks."

"I have loved every minute of it. The crowd have been fantastic, the support from home when we're home or away, my team-mates and coaching staff and particularly Joe - he brought Irish rugby and my game to a different level."

It is an absolute shame that Schmidt's and Best's last game for Ireland turned out to be an absolute mauling at the hands of the reigning champions but there's little any team can do when NZ look to be in this sort of mood.

"We have been flat this year. When you reach a height there's always a risk you'll slip off a little bit. It wasn't complacency. We made a target of ourselves, we've been able to sneak up on New Zealand a couple of times but I know they were very much up for the game tonight."

"Irish rugby is in a really good place. This year hasn't been great but I felt if we had another couple of days to prepare we might have been a little bit better.

In time, he will be remembered as the coach that achieved so much. pic.twitter.com/Kc3Vktlqtu

As for the All Blacks, they put up a proper champions performance against the Irish and it will take a fearsome performance from England to keep them from getting to the final.