Fittingly, the U20 World Championship's two best sides meet in the final.

Nigel Carolan has named an unchanged XV and bench for Saturday's evening's U20 World Championship final against hosts England, in Manchester.

Ireland will go into the final with a host of players in top form. Jacob Stockdale is scoring tries for fun, the front row of Andrew Porter, Adam McBurney and Ben Betts has been immense, James Ryan continues to inspire those around him, Johnny McPhillips has emerged as playmaker extraordinaire and Max Deegan's performances have earned him a nomination as World Rugby Player of the Tournament.

Coach Carolan has praised his squad ahead of the biggest game of their fledgling careers. He said:

"When this group of players came together for the Six Nations earlier this year, they showed a willingness and a desire to learn and grow together as a group. They have put in the hard work on and off the field this season and their reward for that is tomorrow evening's final against England.

"All the players came through the game against Argentina on Monday and we have had a good few days of preparation so I think everyone is now just looking forward to getting the game underway tomorrow."

Earlier today, England coach Martin Haag named an unchanged team from the one that demolished South Africa in the semi-final. 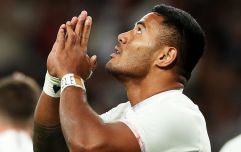 END_OF_DOCUMENT_TOKEN_TO_BE_REPLACED

England have racked up 18 tries in four games heading into the final and outhalf Harry Mallinder is another World Rugby nominee for the tournament's best player.

The final kicks off at 7pm with live coverage on TG4, Sky Sports and Newstalk.


popular
The FootballJOE Pub Quiz: Week 11
O'Hora and Keegan hammer into each other, both of them only revelling in it
Man United's tactical issues summed up in six shocking screenshots
Liverpool's half-time words in Old Trafford dressing room will please fans greatly
Jesse Lingard seeks to clear up what United fan shouted when he was warming up
Manchester United players 'lose faith' in Solskjaer after Liverpool pasting
Paul Scholes rips into Pogba after disgraceful performance vs Liverpool