Ireland may opt for a more dynamic, unpredictable presence for the Scotland game.

On Monday morning, Fergus McFadden was back on the training pitch for Leinster.

Leinster are away to Scarlets this weekend [weather allowing] and McFadden is in need of a decent run out. He has done well for Leinster this season but even if he does register a decent performance in Wales, his position in Ireland's matchday squad for round four of the 2018 Six Nations must be in doubt. 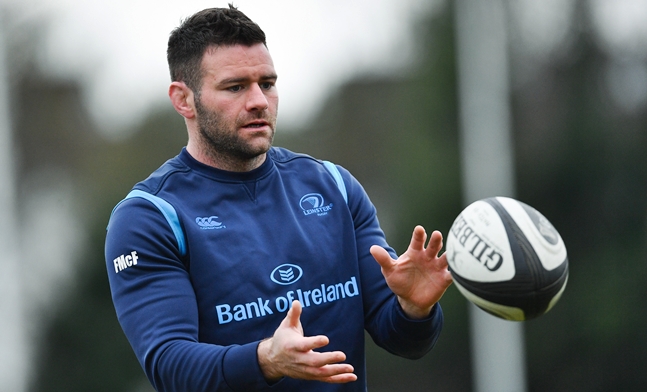 McFadden is often seen as a safe pair of hands and he is someone whom Joe Schmidt places a lot of faith in.

That is merited, on past outings, but his last two sub appearances for Ireland have not inspired confidence. Against the French, in Paris, McFadden and Rob Kearney were the least involved in that 41-phase drive to set up Johnny Sexton's drop goal.

Whereas Keith Earls threw himself into rucks and backed himself to make a big play [the crossfield kick], McFadden only had one carry and a couple of ruck involvements. In fairness to him, he stayed out wide to stretch the French defence.

McFadden got a longer run of it against Wales - 18 minutes - but he struggled to make a positive impact on the game. McFadden is registered as having only one carry, for a metre gain, and missed his only one-on-one tackle.

On 70 minutes, after a decent Kearney counter, he took contrived to knock-on a pass popped back to him when he was under minimal pressure. It gave the Welsh a scrum in a dangerous position but Ireland weathered the storm.

END_OF_DOCUMENT_TOKEN_TO_BE_REPLACED

Then, less than a minute after Conor Murray's penalty made it 30-20, McFadden was guilty of biting in on the charging Scott Williams and leaving Ireland vulnerable out wide.

As we can see below, McFadden was drawn in on Williams [13] but he should have left him to Bundee Aki. As it transpired, Williams was able to get the offload away to Josh Navidi, who then drew in Kearney and slipped in Steff Evans for an easy score. 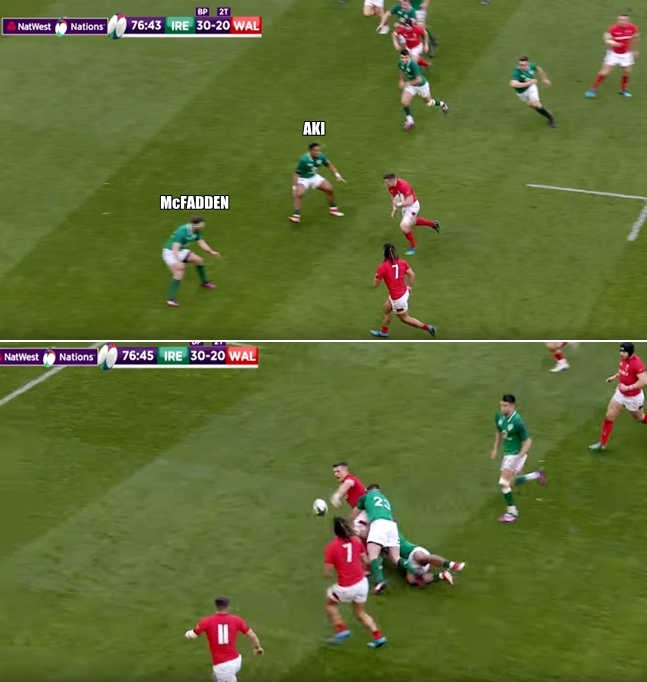 Ireland defence coach Andy Farrell said, in the lead-up to the Wales game, that average was not acceptable. McFadden would have put his hand up after those two unfortunate slip-ups but that may not be enough.

McFadden is a goal-kicking option but, when Sexton was not used, it was Murray that took that 74th minute penalty.

The No.23 position looks, once again, to be tricky for Ireland.

Andrew Conway's knee injury is taking longer than expected to get right so he is unlikely to feature, while Leinster's Adam Byrne is also out injured. Schmidt has had 20-year-old Leinster star Jordan Larmour back in for training with the senior squad so he would appear to be McFadden's biggest threat. Rory Scannell could also feature.

The other options are men who have been there and who have done it for Ireland before - Tommy Bowe, who can also cover centre, and a talented Cork lad who is off to France this summer, Simon Zebo.

Zebo would be the best bet, in our opinion, but Schmidt appears to have bolted that gate and reversed a truck up against it.


popular
Roy Keane story shows the power he had at Manchester United
McGregor admits shout from Dustin Poirier's corner got inside his head
McGregor's first words to Poirier after defeat show where the damage was done
Dustin Poirier annihilates Conor McGregor to earn stunning UFC 257 victory
Khabib Nurmagomedov reacts to Conor McGregor's shock UFC 257 loss
Jolie Poirier certainly let her voice be heard after her husband's win over McGregor
He'll be remembered as a footballer but Keith Higgins has always been a hurler
You may also like
23 hours ago
Two uncapped Munster players backed for Ireland's 2021 Guinness Six Nations squad
5 days ago
"That was the one game that I cried after" - Mike McCarthy
5 days ago
QUIZ: You'll need to be a massive Ireland fan to get all these one-cap wonders
1 week ago
Ireland's best uncapped prospects for the Guinness Six Nations
1 week ago
Darren Cave tells House of Rugby about one part of rugby he definitely doesn't miss
1 week ago
"He's ruptured his hamstring off the bone and he’s trying to get up into the defensive line"
Next Page