Ireland XV that should follow-up All Blacks win against Argentina

"It is time to find out about him."

Irish rugby supporters learned all about hubris back in 2019, so there is a cautious optimism about the place ahead of this Sunday's Test encounter with Argentina.

Andy Farrell's men beat New Zealand 29-20, on Saturday, to pick up their seventh consecutive win. The team are in good shape and stringing together attacking performances that are seeing pace, directness and bold strategies rewarded.

END_OF_DOCUMENT_TOKEN_TO_BE_REPLACED

Up next are an Argentina squad crammed full of quality names, but ones that are just off a seven-game streak of their own. Mario Ledesma's side lost all six of their Rugby Championship games, this year, before starting their Autumn Nations Series with a loss to France. They grabbed a much-needed win, to snap the slide, against Italy at the weekend.

On the latest House of Rugby URC [LISTEN from 31:30 below] Greg O'Shea, Megan Williams and Jason Hennessy were joined by Leinster and Argentina legend Felipe Contepomi to preview the big game, and talk team selections. 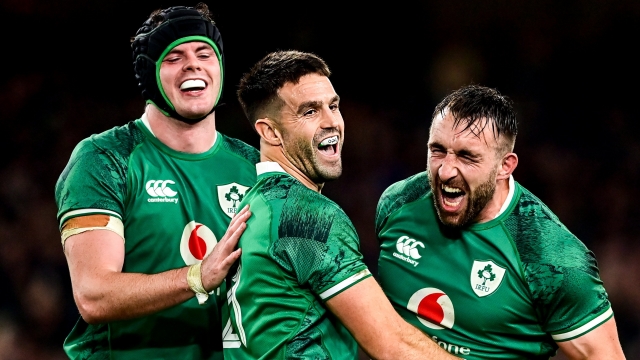 Joey Carbery set to get chance against Argentina

END_OF_DOCUMENT_TOKEN_TO_BE_REPLACED

The one chance we definitely know is coming will be at outhalf. Johnny Sexton has been ruled out for 'four to six weeks' with knee and ankle issues, so the 10 jersey is up for grabs.

Contepomi has worked closely with Harry Byrne, as Leinster backs coach, and is a big supporter of the young outhalf. He is a fan of Joey Carbery, too, and says any Test chance the Munster 10 gets, he needs to convincingly grasp.

The hamstring of Jamison Gibson-Park was heavily strapped, at the weekend, so Andy Farrell may simply opt to pair Carbery with his provincial teammate, Conor Murray. Craig Casey is also is the squad, but may play back-up on Sunday.

END_OF_DOCUMENT_TOKEN_TO_BE_REPLACED

To me, this Saturday's game is the perfect opportunity to give game-time to some other squad members while keeping in a handful of players that ran through Japan and New Zealand. The injury to Sexton means James Ryan will probably start, although Peter O'Mahony could step in as captain if Farrell wanted to rest

Our team includes eight changes from the one that started in the 29-20 win over the All Blacks. Ciarán Frawley at inside centre is the big shout, and Farrell may yet opt to go Bundee Aki there if he wants to give Carbery a familiar face outside. Simon Zebo is on our bench with James Lowe retaining the 11 jersey.

Our Ireland team to face Argentina

Andy Farrell will name his Ireland team to face Argentina on Friday afternoon.


popular
The four stone-cold certainties for All-Stars even as early as this
"He's actually smiling putting the ball over the bar. He should nearly be fainting." - Ryall on Limerick's legacy
Eamon McGee just couldn't help himself with Armagh-melee tweet
Bizarre MLS rule means Inter Miami will get compensation for Gareth Bale transfer
"The economy was one of the big reasons" - Cadogan's move from an electrician to personal training
Full Ireland player ratings after Maori All Blacks teach us an early lesson
Kylian Mbappe reportedly wants PSG to sell Neymar

You may also like
11 hours ago
Bundee Aki understandably emotional, as Ireland pay moving tribute to late Sean Wainui
12 hours ago
Full Ireland player ratings after Maori All Blacks teach us an early lesson
1 day ago
"We could lose all five games" - Darren Cave with a rare take on Ireland's chances
1 day ago
Mike Lowry and Peter O'Mahony in First Test contention as Ireland shuffle deck
1 day ago
"Significant" knee injury ends Iain Henderson's tour of New Zealand
1 day ago
Ireland include plenty of new faces in team to face Maori All Blacks
Next Page