Munster's finest show Europe they are far from dead

There were big contributions from Leinster, Connacht and Ulster players but Ireland would have not beaten a determined Scottish side without their Munster contingent.

Johnny Sexton scored all 19 points for Andy Farrell's side to kick off the 2020 Guinness Six Nations with a victory. The two stand-out players were the back rows CJ Stander and Peter O'Mahony, who was called into the fray after only three minutes.

Munster may have exited the Champions Cup at the pool stages but this was a reminder to Europe that their big players can still deliver a sharp bite.

For two sides that crashed out of the World Cup much earlier than either would have anticipated, there was a warm welcome onto the Aviva Stadium pitch. James Ryan offered up his promo jacket to the two young mascots who were taking in the surrounding wonder.

Metallica's Enter Sandman rang out after the anthems were played and Caelan Doris took his place for the kick reception. Murray swapped some final words with Johnny Sexton and Adam Hastings set us off. Within 40 seconds we had seen the Murray box-kick but the Scots were wise to it and Jacob Stockdale was corralled on the kick-chase.

The first turnover of the game arrived on 99 seconds, courtesy of Doris, and the second was thanks to Peter O'Mahony, who had replaced the concussed Leinster back-row minutes after.

Murray's passing has come under the microscope in the past 16 months - just like every other part of his game - but his deliveries were dialled in during the opening exchanges. He ran a nice support line when Jordan Larmour made his first line-break of the evening.

Ireland had fallen behind to an early Hastings penalty but they went 7-3 ahead after coming out of their first extended stay in the Scottish 22 with a Sexton try. Tadhg Furlong made one hefty carry, Cian Healy got a smart pass away - two phases later - and the Scots were suddenly exposed. Murray put Sexton away for the try and it was like old times.

END_OF_DOCUMENT_TOKEN_TO_BE_REPLACED

On 16 minutes there was another box-kick but, once again, Scotland dealt with it handily. Five minutes later, with the visitors putting Ireland under pressure, Murray faked to box before getting a clearing kick away soon after. It veered out after less than 20 metres and the Irish No.9 admonished himself.

Murray found himself involved, for good and bad, in the awarding of the game's next two penalties. After fielding an up-and-under from Stuart Hogg, he ducked under a tackle from the Scotland captain but was then pinged for holding onto the ball.

He could have shipped a knock in conceding that penalty as his passing fell off from minutes 30 to 40. One pass high above Sexton's head drew gasps from the home crowd but Ireland kept the attack alive and the Munster scrumhalf then drew a penalty from Ali Price, his opposite number. Sexton extended the advantage to 10-6 but there was still time for late, breathless drama in the half.

With two minute to play in the first 40, Bundee Aki and Garry Ringrose teamed up to slash through the Scottish defence and gain over 50 metres. There was a golden opportunity to get a second try but Sam Johnson gambled and darted from the line to intercept Murray's pass from the ruck. Were it not for Larmour's pace, Johnson would have been over.

It was a reprieve for Ireland - won by another turnover from a Munster man (CJ Stander) - but Andy Farrell's men were not out of the woods yet. 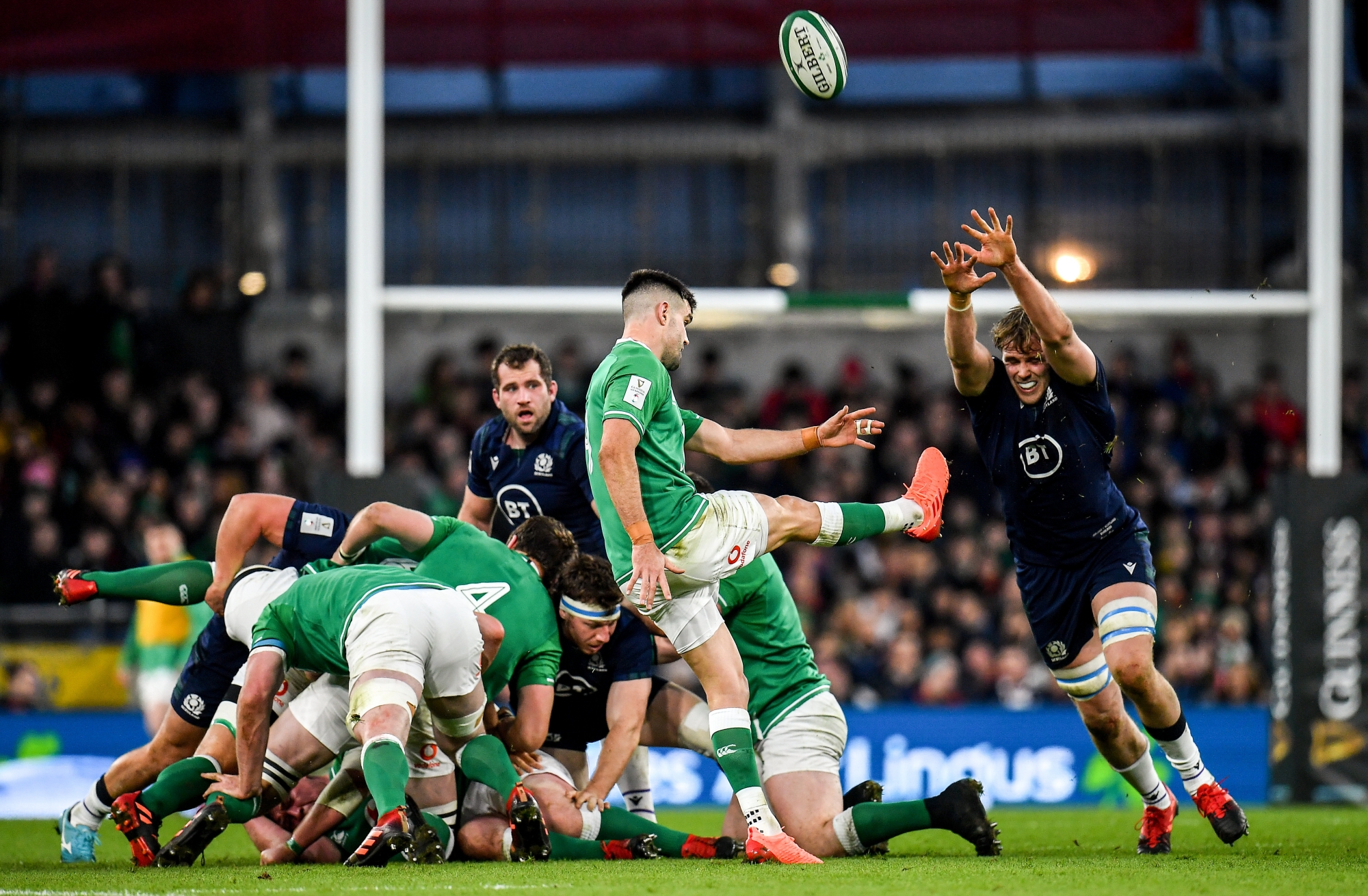 Conor Murray under pressure from Jonny Gray of Scotland as he kicks down-field. (Photo by Seb Daly/Sportsfile)

END_OF_DOCUMENT_TOKEN_TO_BE_REPLACED

With referee Mathieu Raynal sticking his oar in and disrupting the flow of the game, to the frustration of both sides, the second half struggled to replicate the freneticism of the first.

Ireland worked their way into promising attacking positions only to be turned over by the dogged Scots - with Jonny Gray and James Ritchie the pick of that bunch. Their lineout was humming nicely but the Scottish pack was the dominant one and they were putting the hosts under the pump.

Farrell reacted by withdrawing Healy for Dave Kilcoyne but the Munster loosehead lasted only a minute as he shipped a big knock and was left sprawled out and concussed. Play raged on and Hogg let Ireland off a jagged hook by shelling the ball forward, under zero pressure, when a certain try beckoned. The Scots had to settle for three points from the tee.

Hastings and Sexton traded more penalties and Murray's final significant action was a good clearing kick up the left-hand touchline. Soon after, with the clock at 59:51, the Limerick native was replaced by John Cooney.

There were still messy moments but Cooney provided a significant spark, off the bench, and Ireland kept their noses in front. Andrew Conway was obstructed by Johnson and captain Sexton kicked his side 19-12 clear.

The Scots thundered forwards and ploughed through phase after phase on the Irish line. Bundee Aki and James Ryan put their bodies on the line, so did O'Mahony, but it was Stander that essentially won the day with another clutch turnover when it really counted.

Ireland must get better, and will get better. This tournament is won by teams with momentum. Ireland have that now and next in sight is a revenge mission against Wales.

OUR MAN OF THE MATCH: Peter O'Mahony (Ireland)


popular
You'll have to be a diehard fan to get 20/20 in this Liverpool players of the 90s quiz
Wayne Rooney story about Memphis Depay shows why he failed at Manchester United
The SportsJOE 12 o'clock quiz | Day 288
Lady Gaga will perform Satanic ritual during Super Bowl halftime show, according to conspiracy theorist
QUIZ: You have 30 seconds to answer this one tricky football question
SportsJOE 2000s Football Quiz | Round 11
The SportsJOE 12 o'clock quiz | Day 286
You may also like
10 hours ago
QUIZ: You'll need to be a massive Ireland fan to get all these one-cap wonders
1 week ago
"He's ruptured his hamstring off the bone and he’s trying to get up into the defensive line"
2 weeks ago
"I got the scan and it was literally broken in half" - Ciara Griffin on her first Ireland training session
1 month ago
"I don’t know what his problem is with me" - James Lowe on Liam Williams clash
1 month ago
James Lowe joins House of Rugby to talk Test debuts, Liam Williams and Chris Ashton
1 month ago
Brian O'Driscoll turns tables on South Africa after Ireland's World Cup draw
Next Page