'This was another really close call... '

When you are compiling a World XV of the best players operating on the globe, every position will require some serious mulling.

END_OF_DOCUMENT_TOKEN_TO_BE_REPLACED

When all the Test encounters were done, Ireland had trumped New Zealand, England beat Australia, Argentina edged out Scotland, Wales fell to South Africa and an under-strength France beat Japan. We also had Samoa winning the Pacific Nations Cup and Chile beating the USA over two legs to automatically qualify for the 2023 World Cup [the Americans get one last bite at the cherry, later this year].

Given the series victories for Ireland, South Africa and England, it is no seismic surprise that those three nations take up 12 positions in Thomas' 'World XV right now'. The 'right now' part is relevant, as France coach Fabien Galthie gave summers off to leading players like Antoine Dupont, Gregory Alldritt, Cyrill Baille, Romain Ntamack, and more. 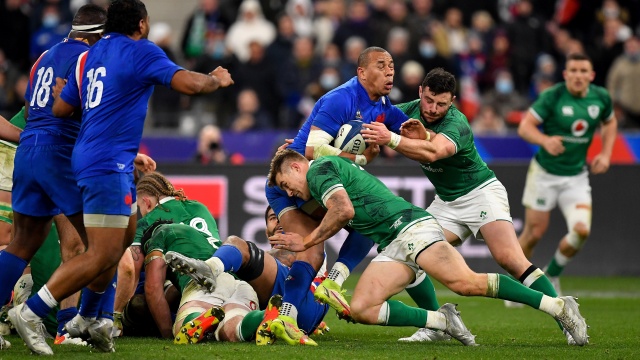 Gael Fickou of France is tackled by Garry Ringrose and Robbie Henshaw of Ireland. (Photo by Brendan Moran/Sportsfile)

END_OF_DOCUMENT_TOKEN_TO_BE_REPLACED

By only playing Japan twice, France did not gain any world ranking points on the final weekend of the summer series Tests. It allowed Ireland to overtake them atop the rankings, but there is little separating the sides.

While the old Six (and Five) Nations rivals were the current standard-bearers in world rugby, 15 months is a long, long time and much can change before the 2023 World Cup has a winner. Ireland - World Rugby Team of the Year and Grand Slam champions in 2018 - can tell you all about that.

Both sides are the teams to figure out, catch, beat and beat up over the next year or so. Fabien Galthie, Andy Farrell and their coaching staffs will be well aware of the need to keep improving and adding tactical wrinkles.

END_OF_DOCUMENT_TOKEN_TO_BE_REPLACED

When it comes to the 'World XV right now' of Simon Thomas, for Wales Online, it only features one France player - winger Damian Penaud. The other winger named is Emiliano Boffelli of Argentina, while Freddie Steward of England is fullback. Jamison Gibson-Park, Johnny Sexton and Robbie Henshaw are named in the backline, along with the delightful and devastating Lukhanyo Am.

There are three Irish players in the pack, two from South Africa, the English duo of Ellis Genge and Courtney Lawes, who bumped out Peter O'Mahony, and the sole All Blacks inclusion is Ardie Savea.

You may also like
2 weeks ago
“My confidence was on the deck" - Aaron Connolly explains why he has made the move to Italy
2 weeks ago
Every Irish transfer in football, this summer, as several big deals get done
3 weeks ago
The frontrunners for Ireland's 33-man squad for the 2023 World Cup
3 weeks ago
All Blacks media manager explains why Ian Foster appearance was cancelled after Ireland defeat
3 weeks ago
Warren Gatland selects nine Irish players in his strongest Lions XV, right now
3 weeks ago
"It’s only 18 months ago that we were being written off altogether" - Johnny Sexton
Next Page