It was the uncomfortable silence that stuck with me.

Back in 2005, when I was living in Auckland, there was an upcoming game between Ireland and New Zealand at the old Lansdowne Road.

Kiwi commentators and pundits spent most of their previews talking about the All Blacks selection dilemmas and building towards the next World Cup. Their national side had just savaged the British & Irish Lions 3-0 in as one-sided a Test Series as I can remember. They were in good nick.

END_OF_DOCUMENT_TOKEN_TO_BE_REPLACED

What of Ireland, though? One pundit considered the question for a few brief moments and predicted they would 'fight like dogs' before getting outclassed.

I remember being irate. My Kiwi housemates nodded in agreement with that match prediction while I futilely chawed about Ronan O'Gara, Gordon D'Arcy and Paul O'Connell.

Up until Ireland beat the All Blacks at Soldier Field, in 2016, this was the way of it. Sure, Ireland would put up a fight (like dogs) but even their bite was nothing to fret over. They were just too good. 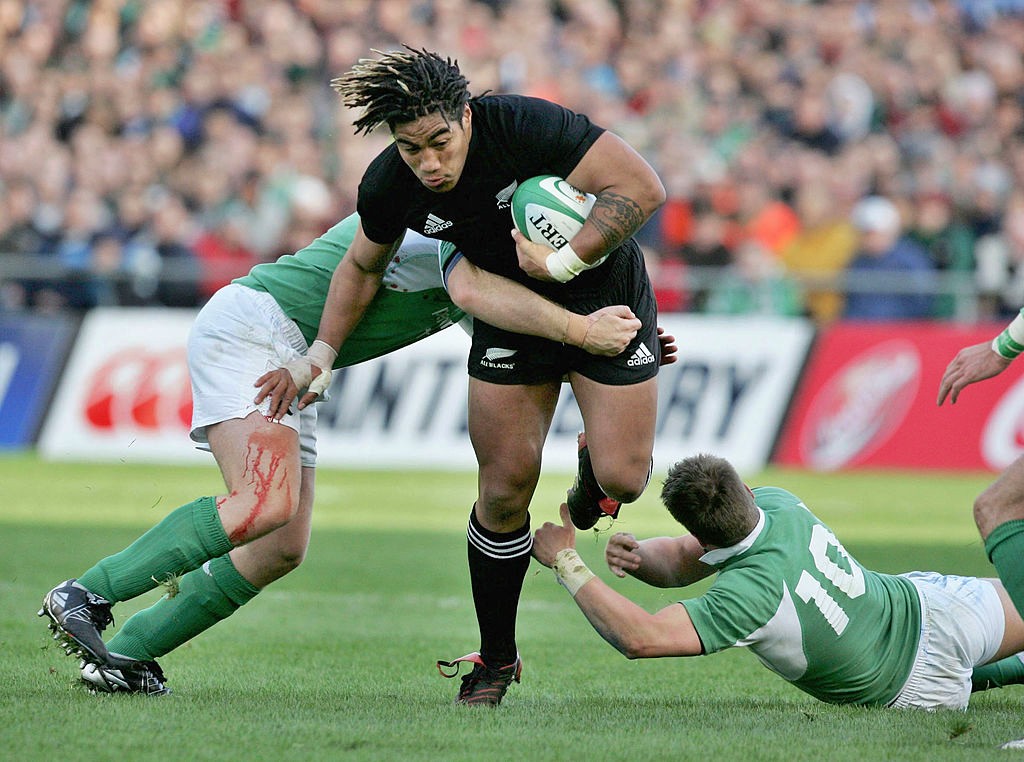 END_OF_DOCUMENT_TOKEN_TO_BE_REPLACED

Fast forward to 2012 and a chance I got to travel back to New Zealand for work, and cover a three-Test tour.

This Ireland team was primarily made up of a Leinster side that had won three Heineken Cups in four seasons, with a healthy dollop of Ulster players that had reached the 2012 European Cup final, and hardened Munster veterans like Ronan O'Gara and Donncha O'Callaghan.

‘A day I can never forget but hate to remember…’

Billy Stickland gunned the rental car over the Bombay Hills and towards Auckland. It was way past midnight. Gerry Thornley pinched the bridge of his nose in the passenger seat while, sitting opposite me in the back, Michael Corcoran tried to talk Brenda Donoghue down from a frenzy.

The former foil to Gerry Ryan was hosting a Saturday morning show on RTÉ Radio One and wanted Declan Kidney’s head on a platter. Donoghue confessed she was far from Ireland’s biggest rugby fan but even she recognised the godawful mortification of a 60-0 loss to New Zealand.

Shabbily sheltered under a tree beside the Speights Ale House, less than an hour beforehand, I had filed my final match report of the tour. Heroism and heartache in Christchurch book-ended by filthy, wretched defeats to the All Blacks. A season that began with four losses in World Cup warm-ups had wound down with Ireland’s worst ever Test caning.

I had a bus ticket booked for 7am the following morning but getting out of town seemed the wisest course of action.

There was a certain logic to most of Kidney’s selection calls on the 2012 tour to New Zealand. Calling Paddy Wallace off a beach holiday in Portugal to face the world’s best team at Waikato Stadium was devoid of such logic. Outstanding for Ulster all season, Darren Cave would watch from the stands as Wallace and his team-mates were shredded by the offloading, flick-pass likes of Sonny Bill Williams and Aaron Cruden.

Brian O’Driscoll had vowed Ireland were capable of besting the All Blacks after the harrowing, last-minute failure in Christchurch. After 29 minutes in Hamilton the hosts were 28-0 up. 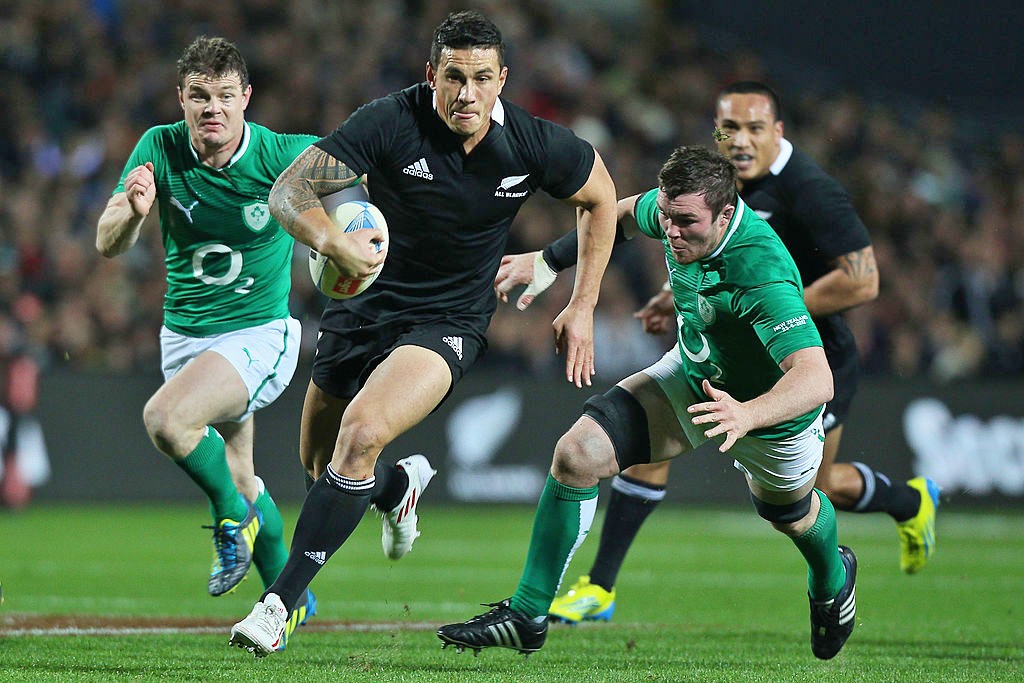 Ireland needed to score first after the break to halt All Black momentum but Rob Kearney was cooling his Cooley jets in the sin-bin. Sam Cane - an openside of so much raw potential that he had shifted Richie McCaw to Number 8 - did a spot of juggling before diving over for his second try of the match. New Zealand’s sixth try was an ‘all she wrote’ affair.

Hosea Gear outpaced Fergus McFadden up the left wing and slowed to a canter before crumpling Keith Earls with a vicious fend-off. Williams, running a supporting line, stopped to check whether Earls was concussed while McFadden, who had caught up with Gear again, dived and grasped mere vapour lines.

Kiwi journalists, usually brash and loquacious when winning, kept schtum. The press box had a funereal feel. They were embarrassed on our behalf. The only sound, and it is one that will stick with me forever more, was the derisive sniffs of the local scoreboard operator as he totted up the tries and conversions. He finally rested at 60-0.

It will be 2022 by the time Ireland return to New Zealand for a Test match.

Hopefully the memory of that match - those Cruden offloads, Liam Messam’s stuck-out tongue and the sniffs of the scoreboard man - will have been leeched by the 10-year gap. 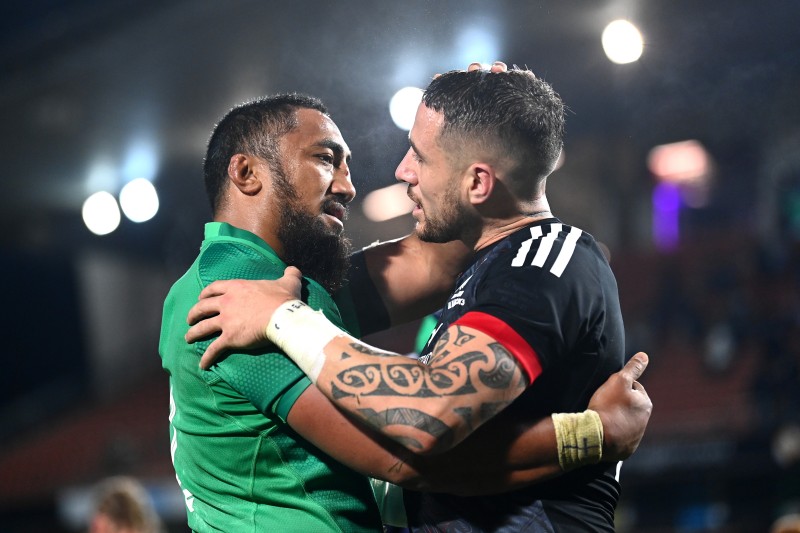 TJ Perenara of the Maori All Blacks hugs Bundee Aki of Ireland, at FMG Stadium. (Photo by Hannah Peters/Getty Images)

One of the greatest challenges in Test rugby

Ahead of the five-game Ireland tour, All Blacks legend John Kirwan stated that Andy Farrell's side would be favourites to beat New Zealand.

Jeff 'Goldy' Wilson, his fellow Sky Sport NZ pundit and former teammate, scoffed at the notion and argued that the All Blacks have an intimidating record at Eden Park, home to the First Test.

While many in New Zealand - fans, pundits, reporters, etc. - would back their side to edge Ireland in a Test Series, there is that concern that Ireland could finally win a big game in The Land of the Long White Cloud.

From an Irish perspective, our coughs have been softened by the provinces not winning any trophies, this season, and that jarring tour opener for the 'A' side against the Maori All Blacks. Those of us that follow rugby casually, closely or [like most] somewhere in between, know New Zealand are still stacked with unbelievable players.

We also know not to get too far ahead of ourselves as, although we have won three of the last five Tests, Ireland lost the one that really mattered at the 2019 World Cup. And lost it badly.

In 12 Test matches between the sides, in New Zealand, Ireland have lost all 12, scoring 152 points and conceding 421.

All that being considered, I can still say Ireland don't fear the All Blacks any more.

Respect them? Yes. Love the players and the style of rugby they like to play? Hell yes. Dread playing them? No.

This is the end of another long season, the ABs still have plenty of trump cards, Joe Schmidt is on the scene now and Ireland are picking up too many injuries, already.

I am looking forward to seeing what our best players can do against their best players, though. The fear factor has gone, for now. The excitement remains.