A few surprises here and Joe Schmidt changes things up.

Ireland have made six changes from the team that beat England to claim a Grand Slam for the opening Test against Australia.

Peter O'Mahony will captain the side in the absence of long-term leader Rory Best, who missed out on touring due to a hamstring injury. The Munster man takes his place in the Irish back row with Jordi Murphy and No.8 CJ Stander.

Joey Carbery, who recently joined Munster, gets a start at outhalf alongside Conor Murray. Johnny Sexton is named on the bench as backline cover, along with Kieran Marmion and Jordan Larmour. 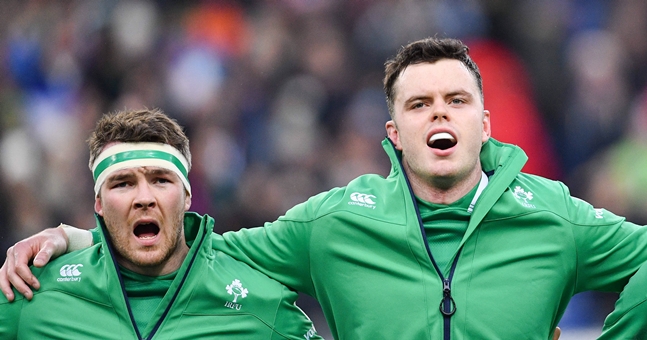 END_OF_DOCUMENT_TOKEN_TO_BE_REPLACED

There are a raft of changes in the Ireland pack, including a completely untried front row unit.

Jack McGrath, Rob Herring and John Ryan all have a lot of Test match experience but this will be their first time packing down together. The second row is unchanged from that England game, with Iain Henderson and James Ryan renewing their partnership.

Schmidt has rested several Leinster players after they went deep into the season on their double-clinching run and he is also going easy on the taxed Scarlets [now Munster] forward Tadhg Beirne. The Ireland bench has three British & Irish Lions on it, with Cian Healy and Tadhg Furlong keeping Sexton company on Saturday.

END_OF_DOCUMENT_TOKEN_TO_BE_REPLACED

Michael Cheika named his Wallabies side a couple of hours in advance of the Irish announcement.

There are two new caps in a starting XV that will be captained by Michael Hooper - hooker Brandon Paenga-Amosa and No.8 Caleb Timu - while the uncapped flanker Pete Samu is on the bench.


popular
"Johnno went, 'We’re not moving! You're trying to mess us about!'" - Ben Kay recalls red carpet controversy
"Some of the generals wanted me executed" - Irish rugby legend on flag caper that went wrong
Tommy Fury spotted having the time of his life at student night out
Garry Ringrose challenges "pretty ridiculous" changing conditions for women's players
No Simon Zebo or John Cooney as Ireland gather 50 players for one-day camp
Niamh Kilkenny scored a point so amazing it's worth watching again...and again
Neil McGee hasn't worked in eight weeks after back injury but still won't rule out championship return

You may also like
1 day ago
Katie McCabe believes that equal pay deal with FAI "doesn’t add pressure"
3 days ago
Clinton Morrison shares advice Roy Keane gave him on morning before Saipan showdown
1 week ago
Ireland's best XI under Stephen Kenny starting to take shape
1 week ago
Serbian media react to 'True Football Tragedy' and hail "amazing" Gavin Bazunu
1 week ago
"I was already taking my jersey off!" - Andrew Omobamidele's post-match interview was so pure
1 month ago
QUIZ: We want YOU to choose the next British & Irish Lions head coach
Next Page