Ireland make the change everyone expected for Italy, with one surprise call

Joe Schmidt has made three changes to his matchday squad to face Italy on Saturday.

Schmidt has brought in Munster lock Donnacha Ryan in one change from the starting XV that lost 27-22 to Scotland in Edinburgh last week. Ryan replaces Ulster's Iain Henderson, who is rested after picking up a strain in training. Ultan Dillane is on the bench.

The Irish front row has one change, with the recalled Cian Healy and Tadhg Furlong packing down alongside captain and hooker Rory Best. While Ryan's selection had been predicted, few outlets called the return of Healy [his first Six Nations start for almost two years].

There is one new face on the bench, with Ulster's Craig Gilroy replacing Tommy Bowe as backline cover 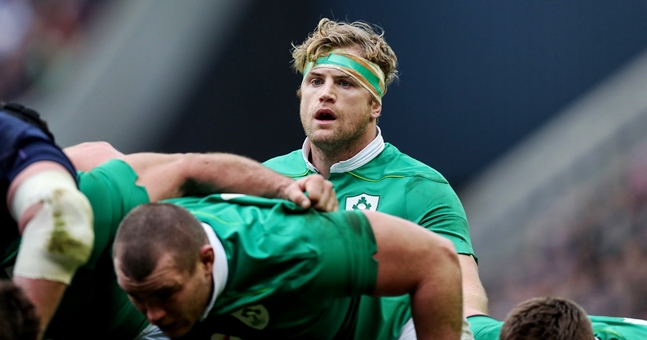 END_OF_DOCUMENT_TOKEN_TO_BE_REPLACED

Schmidt has resisted calls - in the media and online, at least - to re-jig his back row. CJ Stander and Sean O'Brien will pack down beside Jamie Heaslip.

There are no changes in the Irish backline, meaning Paddy Jackson gets another whirl at out-half alongside Conor Murray. Rob Kearney is fullback with Simon Zebo and Keith Earls occupy the left and right wings. Robbie Henshaw and Garry Ringrose get their second start together in midfield.

Ireland take on Italy at Stadio Olimpico from 2:25pm on Saturday.


popular
It's often forgotten that Tommy Walsh began his career with the same stardom and promise as David Clifford
Paul Scholes calls a spade a spade after comeback win
Derry club win county final factfile games with extravagant set of jobs
Jordan Larmour primed for a season to remind everyone how good he is
Shane Walsh: 'That's not how I was coached to play football. No one was coached to play football that way'
Paul Scholes says Paul Pogba is a "daydreamer" and Fred and McTominay are "limited footballers"
Galway fans' frosty reception for Davy Fitz doesn't make any sense

You may also like
2 days ago
Seven exciting Ireland prospects pushing for November squad inclusion
2 days ago
"Where Johnny Sexton is so important to us now is being able to pass the baton"
2 days ago
"I'd love to finish on home soil but I can't see it. I won't be playing in the next Six Nations"
3 days ago
Ireland star Will Connors on his rude awakening playing GAA in KIldare
4 days ago
Andy Farrell's Ireland squad for November internationals to feature some exciting talents
4 days ago
Picking Ireland's best back row as multiple candidates hit early form
Next Page