England did a fantastic job of keeping the Irish crowd quiet, but the passion that was so evident here, back in November, was strangely absent this evening.

It is often said that Irish teams do not like the favourites tag. Their fans seems to like it even less.

Last March, at Twickenham, thousands of Irish fans descended on St Patrick's Day. The feeling - apart from being bloody cold - was one of cautious optimism. Ireland had grown as the Six Nations progressed but beating England at home for the first time since 2010 would be a tall task.

END_OF_DOCUMENT_TOKEN_TO_BE_REPLACED

If the travelling support were apprehensive, Ireland did not show it. They went out onto the pitch that day and executed Joe Schmidt's game-plan to a tee.

England were well beaten that day and Ireland secured only their third Grand Slam in history. They followed that up by beating Australia 2-1 in a riveting Test Series against Michael Cheika's side.

Come November and they accounted for Italy at Soldier Field before beating Argentina in a flat match at the Aviva Stadium. The home crowd went to that game expecting to win and the decibel levels were low throughout.

The following week, New Zealand arrived. The game was febrile and ferociousness. Ireland withstood wave after wave of All Black attack before they started to stick some jabs of their own. Devin Toner sat Brodie Retallick down. Garry Ringrose emptied himself into a couple of big tackles inside his 22. CJ Stander ripped a ball from Sam Whitelock and stalked off with the roar of 48,000 Irish voices filling the air.

There were a few thousand Kiwis there but they drowned out as Irish fans roared themselves hoarse.

END_OF_DOCUMENT_TOKEN_TO_BE_REPLACED

The final 10 minutes that November night were incredible. The final three was an ever-rising Fields of Athenry crescendo. It was a show of defiance. Belief in the man tackling, getting up, tackling and looking for more.

It was a night when you felt Ireland, and their fans, were at home with their potential. Best in the world for one night, definitely, and maybe beyond.

Long after the full-time whistle sounded, fans remained in the ground to salute their heroes; wanting to live in the moment for as long as possible.

Fast forward to today, February 2nd 2019, and 'Swing Low, Sweet Chariot' started to ring out as early as the second minute when Jonny May crossed the white-wash in the left-hand corner. That chorus was drowned out by boos and jeers.

After that, the home crowd had minimal involvement in a crucial match. Not once was a song heard as the Irish support waited for their team to go through the gears and prove they were the +8 favourites the bookies told us they were.

But Ireland were never allowed to cut loose. There was Cian Healy's try and a couple of Johnny Sexton penalties but anything good Ireland managed was bettered by the men in white jerseys.

If an Irish player broke the line, the ball was turned over a phase or two later. When Ireland made one good carry, knocking an English player back, the ball would be slowed down. Conor Murray's box-kicks - normally a source of such joy - went skyward and, more often than not, rested snuggly in English arms.

One twice did the fans detach themselves from their seats, in a collective, and they were when Jacob Stockdale made a first half line-break and Garry Ringrose forced a second-half turnover by walloping into the ribs of Owen Farrell. In 2018, tries would have followed. In 2019, England weathered the storm.

'Sweet Chariot' was louder again, after Henry Slade scored a controversial try to make it 22-13. Farrell pumped his fists when a long-range penalty made it 25-13 with 10 minutes to go but worse was to follow. 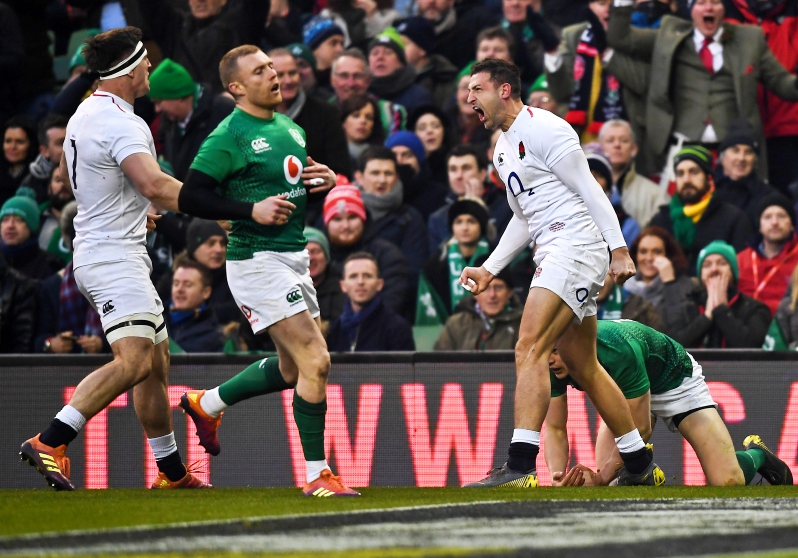 With five minutes to play, and Ireland having to take risks to get out of their 22, Sexton threw an intercept to Slade and it was good night and good luck.

And then came a sight that was just awful to see - Irish fans leaving in their droves.

As Farrell lined up a conversion that he would go on to make - putting England 32-13 ahead - thousands decided to abandon their team and flood for the exits. After the high of Fields of Athenry, only 13 weeks ago, this was a grim spectacle.

Asked if that strange to see fans not sticking with Ireland until the very end, Schmidt replied:

"Yeah, that would be unusual.

"I didn't really notice it. It wasn't the full focus of my attention at the time. It was massively disappointing that we gave up that try to Slade.

"The Elliot Daly try was similarly disappointing because in a game of fine margins, to offer up those tries is frustrating.

"But, I can understand the frustration of the fans and, at that stage, the game was gone. We weren't going to get back and win it.

"The contrast was with the All Blacks game, we were in front and we had every chance of winning it and managed to."

Ireland had no chance of winning when Slade slid in for his second. A hefty, chastening defeat was all they could expect. John Cooney got a consolation try but one-third of the ground had emptied out by then.

One would have hoped, gutted as they were and as poorly as they played, that they would have had the support of a still packed stadium as the final whistle sounded.

Instead, the players looked up to the stands and saw thousands had already left. Off to drown their sorrows or beat the queue home.

For a team that has given so many joyous moments over the past five years, and particularly since beating the All Blacks in Chicago, they deserved much more than that.


popular
Rob Kearney taught a classic GAA lesson when he tried to have the craic in second game back
The scenes in Newbridge as the biggest hit and hope ever knocks Moorefield out
Kieran McGeary on his relationship with Mickey Harte and his role in Tyrone's success this year
Rob Kearney on defying union "bigwig" that told him he'd never play GAA again
How one text message a teammate sent Kieran McGeary proves that Tyrone's success was a team effort
When Liam Brady lit into Brian Clough for his dismissive Mick McCarthy comments
"Mayo have been back and back and back all the time. That's some resilience, to do that." - McGeary bats for Mayo
You may also like
3 days ago
Cork duo demolish Hull in Championship clash
6 days ago
Katie McCabe believes that equal pay deal with FAI "doesn’t add pressure"
1 week ago
Clinton Morrison shares advice Roy Keane gave him on morning before Saipan showdown
1 week ago
Full Ireland player ratings as underdogs Spain put World Cup hopes in danger
2 weeks ago
Ireland's best XI under Stephen Kenny starting to take shape
2 weeks ago
Serbian media react to 'True Football Tragedy' and hail "amazing" Gavin Bazunu
Next Page