What a wild game that was. Andy Farrell's side have got their two-game summer spin off to a winning start. The full Ireland ratings reflect a mixed bag performance.

Ireland somehow went into the dressing rooms 19-17 ahead at the break. Japan were superb in attack but once Ireland got into their 22, they did not have the brute strength to repel their hosts.

END_OF_DOCUMENT_TOKEN_TO_BE_REPLACED

Michael Leitch and Timothy Lafaele, who had a try chalked off for a forward pass, got over for Japan's two first half tries. Ireland responded with scores from Chris Farrell, a Peter O'Mahony-inspired Stuart McCloskey score and a close-range bash from Finlay Bealham. 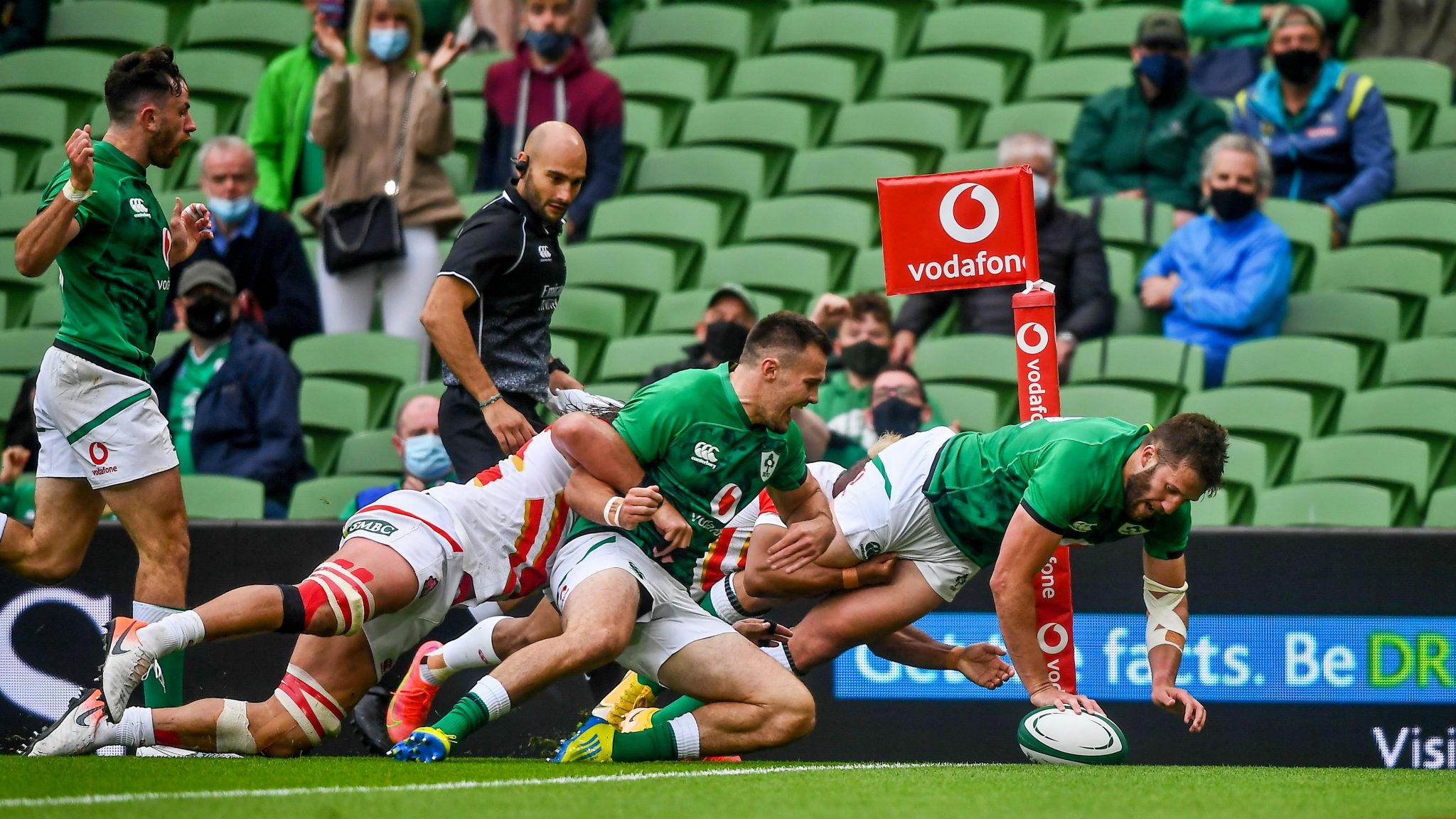 That Ireland lead lasted all of three minutes as Siosaia Fifita was the next to benefit from a clever kick behind the lines. Ireland's response was rapid as they horsed straight into their guests and Jamison Gibson-Park paved the way for Josh van der Flier to crunch over for the score.

Just when Ireland looked to have some daylight on the scoreboard - with a converted Jacob Stockdale try - back came Japan with another lightning attack and it was No.9 Naoto Saito scoring under the posts - 33-31. And still a shade over 20 minutes to go.

Ireland were the ones doing the pressing in the final quarter and a Carbery penalty gave them a five-point advantage as Andy Farrell started to freshen up his troops. A Ronan Kelleher poach won Ireland another penalty and they were eight clear with 10 minutes remaining.

Here's are our full Ireland ratings for Andy Farrell's men in green:

END_OF_DOCUMENT_TOKEN_TO_BE_REPLACED

Good, brave take early on after a Japanese dink over the top. Repeated the dose to claim an up-and-under, soon after, and got the crowd going for the first time. Was having a fine first have until he overshot and missed Lafaele for his try.

Won his team a penalty in a fine attacking position after pouncing on a dropped ball. Made 12 metres off his three carries and stuck his two tackles before coming off injured, on 30 minutes.

Showed nice footwork to step inside for his try after backing himself. Injured himself going into a tackle and went off for a Head Injury Assessment, but did not return.

Showed up well in support, over on the left wing, and benefitted from O'Mahony's offload to score in the corner.

Stu McCloskey gets over for the score after a fine carry and offload from Pete O'Mahony pic.twitter.com/TznTMf8NTf

Missed a vital tackle out wide before Fifita's try. Switched to outside centre for most of the second half and made some big carries as Ireland took control.

Strong in defence inside his 22 with a couple of bits hits when Ireland were hanging on. Stayed patient, out wide, and was rewarded with his 19th Test try.

Missed a must-make tackle on Fifita after Japan broke up the left wing, but O'Mahony dug him out. Got back into the line and made an important tackle on Matsushima. Backed himself to score [instead of passing wide] on 40 minutes but was held up over the tryline. Switched to inside centre after Farrell went off.

Kicked out on the full, early on. Was struggling to impose himself on what was an often chaotic game. Nice snipe in the second half before van der Flier's try.

Got a lot of back slaps after Ireland won a crucial scrum penalty inside their 22.

Showed real power in the early exchanges. Poor lineout dart let Japan off the hook, on 23 minutes. Very strong carry off the back of his own lineout, in the lead-up to Stockdale's try. Won his side a big penalty in the closing stages.

Made two carries in the first half - one led to Farrell's try and the other was a try for himself.

Showed nice hands to tee up Bealham for a dart before Farrell's try. Could not claim a restart and that eventually led to Japan's first try.

Will not have been pleased with his start - conceding an early lineout penalty. Turned over on a carry, on 33 minutes, then had a lineout throw swiped away from his waiting grasp in a tough first half for the captain. Like many others out there in green, improved as the game progressed.

One of Ireland's better players in a fitful first half. Chased back hard and basically got in the way to help prevent a Japan try. Then showed up on the left wing, rode two tackles and offloaded for McCloskey to score. Rolled up his sleeves at got stuck in to slow Japan down after the break.

Andy Farrell said, pre-game, that he could well be the next flanker off the ranks if the Lions pick up another injury. A statement-making performance would have been handy, and he was not far off. Missed a couple of first half tackles but did well to power over for his try. Another direct run sucked in bodies before that Stockdale try.

Earmarked as the man to get a long run in the No.8 jersey, he did not convince today. One offload attempt went 10 yards forward while another was intercepted and could have led to a Japan breakaway try. Carried strongly after the break.

Was not the only Irish back to struggle in defence against the marauding Japanese.

Came in at outhalf as Carbery dropped to inside centre.

Made a lovely carry, not long after coming on.


popular
"Some of the generals wanted me executed" - Irish rugby legend on flag caper that went wrong
"Johnno went, 'We’re not moving! You're trying to mess us about!'" - Ben Kay recalls red carpet controversy
Rio Ferdinand claims that Cristiano Ronaldo should have been told to 'sit down' against Young Boys
Garry Ringrose challenges "pretty ridiculous" changing conditions for women's players
It won't mean much but Pat Spillane's compliment to Mayo and to Lee Keegan says it all
Gary Neville embarrassed again following hasty Liverpool tweet
"I am a very nervous person" - Morgan's pre-game routine shows that nerves are part of the journey
You may also like
18 hours ago
Katie McCabe believes that equal pay deal with FAI "doesn’t add pressure"
2 days ago
Clinton Morrison shares advice Roy Keane gave him on morning before Saipan showdown
1 week ago
Ireland's best XI under Stephen Kenny starting to take shape
1 week ago
Serbian media react to 'True Football Tragedy' and hail "amazing" Gavin Bazunu
1 week ago
"I was already taking my jersey off!" - Andrew Omobamidele's post-match interview was so pure
1 week ago
Gavin Bazunu, Andrew Omobamidele and a glimpse of better days ahead
Next Page