Ireland will benefit greatly when James Lowe becomes Irish-qualified, but they can't afford to hang about.

One of the best two players at Tokyo Stadium, last Saturday, were Joe Moody and Brodie Retallick. A loose-head and a lock.

Of the starting packs, New Zealand's passed 29 times, including four offloads. Ireland's pack passed 18 times and there were two offloads. In terms of tries and assists, both packs were tied at one apiece.

In terms of an attacking threat, though, the Kiwi pack was streets ahead of Ireland's. That was replicated in the backline, too. Jacob Stockdale was Ireland's most productive ball carrier [four for 30 metres gained] but there were six All Blacks players with better returns [George Bridge gained 117 metres off 15 carries].

On the latest episode of Baz & Andrew's House of Rugby, Jerry Flannery and Andrew Trimble looked back on Ireland's quarter final exit at the hands of a clued in, fired up New Zealand side.

Flannery, who spent some time with coaching set-ups in New Zealand during his summer's off at Munster, feels that Ireland need, first and foremost, is more footballers.

"Remember when Denis Leamy played?" he asked. "Leamy was a good athlete but he was a phenomenal footballer. That was the difference and that is what made him stand-out. It's about getting guys that can stand flat on the line and pass the ball. People with good catch-pass skills."

Flannery also recalled a turning point for Munster, before they won the 2008 Heineken Cup, and a 2010 training session with Ireland that proved even the best team in the northern hemisphere had a lot to learn. 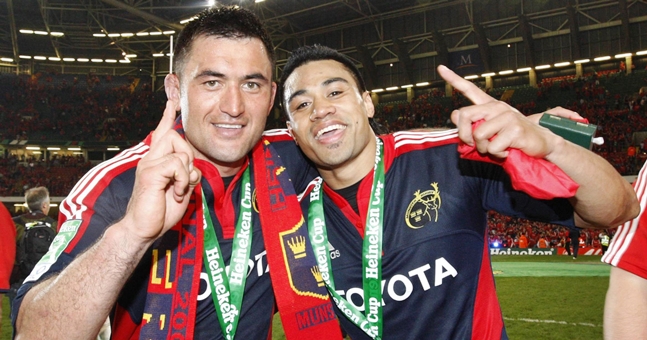 END_OF_DOCUMENT_TOKEN_TO_BE_REPLACED

"The difference between Ireland and the All Blacks," says Flannery, "is they can manufacture a score with far less effort than Ireland would have to put in. So it never feels like they're a million miles away.

"Even when the opposition score two tries, the All Blacks will feel that if the opposition make a mistake, they can carve it up and get a score back quickly." He continued:

"I remember at Munster, in 2006, we won the European Cup but said to ourselves, 'My God, it is so hard for us to score a try'. We have to win a penalty, kick into touch, maul, win a penalty, kick it to touch, get the 12 to hit it up. 500 phases to get a try and we're going back to the halfway line, exhausted.

"We said that year that we're not going to be competitive in Europe again unless we can manufacture a try out of nothing. Two years later, we had signed Lifemi Mafi, Rya Tipoki and Doug Howlett, and the lads could pull a try out of their ass; out of nothing; and I wouldn't even touch a breakdown."

James Lowe - Irish qualified in November 2020 - would tick all of the boxes mentioned by Flannery but there are up-and-coming, as well as current, players that could be drafted into the Ireland set-up to improve that area of their game. Ireland can't be hanging around for Lowe to come off the ranks.

Flannery feels that identifying good footballers currently in the system and getting the right coaches to bring them into the fold would help. Longer term, the coaches themselves needed up-skilling - something High Performance Director David Nucifora is already looking into - and the focus needs to be on the 10 to 12 year olds. We may not see the full benefits until 2027 or 2031 World Cups (but who wants to hear that?!)

END_OF_DOCUMENT_TOKEN_TO_BE_REPLACED

Even when a team looks to be at the top of the game, and the world, there is always room for improvement. Ireland discovered that this year, after a glowing 2018, and that resonates to Flannery. He recalls some training sessions not long after Ireland won their first Grand Slam of the professional era, in 2009.

"That's a fundamental part of the game - being able to run a switch. But we were so poor at it. And I said to myself, 'We're pretty much the best team in Europe at the minute, as we've won the Grand Slam, and we can't even run f***ing switches'.

"You imagine just having kids of 11 and 12 just running switches and see how good they'd be when they get to international level."

Flannery says there is a lack of focus on the fundamentals as northern hemisphere often falls back into the 'sh**-fights' that develop when the weather worsens, from October through to March.

Set-pieces and kicking is king but the All Blacks are racking up World Cups with their running game, and handling all other aspects adeptly too.

The latest episode sees Andrew Trimble and Jerry Flannery look back on Ireland's World Cup exit to New Zealand and talk developing footballers like James Lowe and Doug Howlett on these shores.


popular
QUIZ: Can you name the Football Italia cult heroes? | Part 2
Justin Gaethje tells Conor McGregor to wait his turn
The SportsJOE 12 o'clock quiz | Day 72
Only a true nerd will get full marks in our 2016 football quiz
SportsJOE 2000s Football Quiz | Round 3
SportsJOE 2000s Football Quiz | Round 2
The SportsJOE 12 o'clock quiz | Day 71
You may also like
1 day ago
You'll be hard pushed to get full marks in this Serie A quiz
2 days ago
Tadhg Beirne on the Wayne Pivac request that helped change his career
5 days ago
Baz & Andrew's House of Rugby - Tadhg Beirne and John Cooney
1 week ago
'We knew how much it meant to them' - Conrad Smith on Croke Park history lesson
1 week ago
"I was like, 'Your ribs will be broke, alright, if I get my hands on you again!'"
1 week ago
Baz & Andrew's House of Rugby - Mike Brown on past battles with Ireland
Next Page