Do you remember the 2007 Six Nations?

Where Ireland lost the championship by four points and a 79th minute Vincent Clerc try in Croke Park?

What about the 2011 Six Nations? Where they lost to Rugby World Cup semi-finalists Wales and eventual finalists France?

How about the 2015 Six Nations? Where Ireland won the Six Nations and conceded just 56 points?

Come within a few points of the championship in 2007; bow out in the group stages of the World Cup a few months later.

Win the Six Nations and concede just 56 points over five games in 2015; lose to Argentina and concede 43 points in another quarter-final defeat.

Win the Grand Slam, a tour of Australia and register a first ever home win over the All Blacks; underwhelm the following Six Nations.

Ireland were smacked in the face at home in their opening round loss to England, saved by some Joey Carbery magic in Scotland and they trudged their way to a bonus point win in Italy in an error-ridden performance.

END_OF_DOCUMENT_TOKEN_TO_BE_REPLACED

They've been bad but there can be a tendency to lose the plot with the rugby team. World beaters with one win, frauds with one loss.

The swing of the nation towards Joe Schmidt's side can rapidly gather pace in either direction but it's important to note, particularly in the last three World Cup cycles, that Ireland's form, good or bad, has never really given us any great indication of how the team should fare at the World Cup.

Ireland were poor against Italy.

Five botched line-outs. 14 turnovers. 19 missed tackles. Less clean breaks and offloads than an Italian team that hasn't won a Six Nations game since the 2015 tournament. The numbers support that theory just in case your eyes deceived you.

The ruthlessly clinical Ireland were incoherent, sloppy and lethargic and they wasted so many opportunities that they would have usually executed with precision and power.

However, there were still glimpses, Keith Earls second-half linebreak and Quinn Roux's opening try, but much of what was offered in Rome was far from a side that still looks like they're trying to regather themselves after a humbling experience at Lansdowne Road earlier this month.

🏉 Ireland are patient and powerful and Quinn Roux barges over the line to break the deadlock! ☘#ITAvIRE #GuinnessSixNations #VMTVRugby pic.twitter.com/dABDwu2wcm

END_OF_DOCUMENT_TOKEN_TO_BE_REPLACED

The bad news is that Sean Cronin struggled at the line-out after such an outstanding start to the season with Leinster.

The bad news is that Conor Murray still looks some way from being back to his best.

The bad news is that Ultan Dillane put simple balls down despite putting in a massive effort in defence with a game high 20 tackles.

The good news is that it's just one game for Cronin and you'd back him to bounce back given his form this season. The good news is that James Ryan, Devin Toner, Iain Henderson and Tadhg Beirne can all come back in the second-row and that Ultan Dillane is not bad for a sixth-choice lock.

The good news, for Ireland at least, is that Murray still has most of this year to recover and try and regenerate the lost power in his shoulder and neck.

Ireland, even with their changes, look nowhere near as sharp or as clinical as they have in previous years under Schmidt and there is more pause for concern following the wins over Scotland and Italy than there would have been after the England defeat, but there's still a lot of rugby to be played. 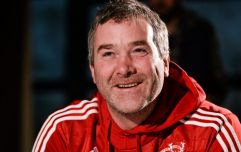 END_OF_DOCUMENT_TOKEN_TO_BE_REPLACED

Ireland will welcome France to Dublin and will then have to head to Cardiff on the last day of the championship with what should be everything to play for, and everything to prove, against a Wales team that hasn't dropped a game since their defeat at Lansdowne Road last year.

Schmidt will have a lot to think about over the next two weeks.

Does he bring back Robbie Henshaw and Garry Ringrose in the centres?

Does he switch up the backrow; with everyone from Josh van der Flier, Jordi Murphy, Dan Leavy, Jack Conan, Iain Henderson and Beirne all possible inclusions to partner Sean O'Brien and Peter O'Mahony in a very rotatable backrow.

Who partners James Ryan in the absence of Toner? Especially with Henderson and Beirne now back available in the second-row?

Keep Rory Best, your captain, or back Cronin to bounce back?

These are all legitimate questions Schmidt will have to ponder over the next fortnight but with three championships in the last five years, and a horrendous record at Rugby World Cups given the level of success the national team has had this century, these are the weeks to find the answers to these questions, and while the performances are well below what we've come to expect from this Irish side, the talent is still there.

Teams win, they lose, but they don't capitulate and implode after three games.

Ireland are in a funk but the primary goal should still be ironing out issues around their kicking game, attack, line-out and combinations before the Rugby World Cup, the true barometer for this team and this coach.


popular
Can you name every English football club that begins with 'W'?
The SportsJOE 12 o'clock quiz | Day 106
SportsJOE 2000s Football Quiz | Round 9
QUIZ: Name the country these football teams play in
The SportsJOE 12 o'clock quiz | Day 105
How Connacht could line up after summer of massive change
James Haskell on text exchange with Peter O'Mahony after Ireland's victory over Scotland
You may also like
4 days ago
"The academy boys have turned into small monsters over the past few weeks" - Peter O'Mahony
4 days ago
Baz & Andrew's House of Rugby - Keith Earls joins us for Season Two finalé
1 week ago
"Having one of the best in the world to emulate has been really good"
1 week ago
QUIZ: How well do you know Paul McGrath's football career?
1 week ago
"I'm so proud of the opportunities Ireland gave me and of the woman I am today" - Linda Djougang
1 week ago
"As a team, we’re ready to take a trophy home now" - Craig Casey
Next Page